It now seems pretty clear that the mainstream media is just about fully in bed with Islam, and will not say a word contrary to it, but will instead accept without question every single line the Muslim apologists throw at them. These guys are truly in a state of dhimmitude, allowing Islam complete reign in their coverage of the Sydney hostage crisis. 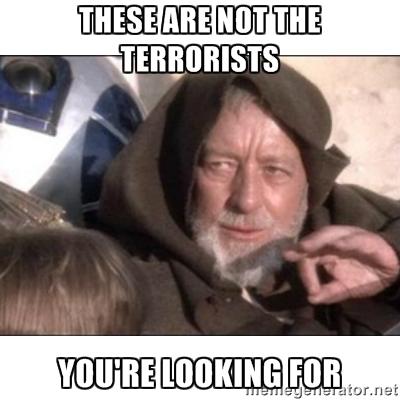 All over our lamestream media they are featuring one Muslim apologist after another a free ride, without one contrary voice. Journalists once dug for facts, asked hard questions, and offered all sides of a debate. Today it seems the MSM has decided that Islam is always right, its critics always wrong, and there can be no negative coverage about Islam.

I have been utterly appalled at the dim-witted media dhimmies who are bending over backwards to promote Islam and help spread its message. One could seriously ask if most of the MSM is now completely in the hands of Islam. They seem incapable of any sort of objective reporting, and now simply parrot what their Muslim overlords tell them.

We must realise that in Islamic teaching Muslims are permitted to use dissimilitude and deception on the infidels to further the cause of Islam. This is called taqiyya. It seems to be rolled out now with increasing regularity, and the dupes in the MSM are just soaking it up.

We have seen this in epidemic proportions over the past day. Plenty of Muslim leaders for example are telling us the flag held in the crisis is just a nice friendly flag with some generic text about God. It of course features the shahada, the Muslim creed which all Muslims are to profess as the first pillar of Islam.

And it is of course also the text often found on many of the terror and war flags of Islam. A flag like this represents the taking of territory, and the establishment of the rule of Islam. But the gullible media simply accepts whatever the Islamic leaders are dishing up here. And it would seem they have managed to drag up just about every Muslim leader in the country.

But to see just how far down the drain of deplorable dhimmitude our media elites have gone, just imagine for a moment what would be happening right now if the hostage taker were in fact a Presbyterian Sunday school teacher, brandishing a Bible, and singing Christian hymns.

Everywhere the media would be highlighting the C word ad infinitum, ad nauseum. They would be having a field day blasting Christianity and claiming that it is surely now time to clamp down on this evil religion – one which is so intolerant, hate-filled and bigoted.

There would be calls to monitor all sermons in churches, all Christian schools, and all Christian websites. A site like mine would certainly be targeted, and the freedom to preach the gospel would be eroded even further. It would be open season on Christianity.

But because this is a Muslim who did this, the entire focus of the MM is to push the PC line that this has absolutely nothing to do with Islam. Never mind the Islamic credentials of the hostage taker.

We now know that the hostage taker is 49-year-old Iranian refugee Man Monis. He has had quite a shady history in this country, and it is just so amazing that he has been allowed to run free up until now. Just yesterday (on December 14) he posted this message online:

Islam is the religion of peace, that’s why Muslims fight against the oppression and terrorism of USA and its allies including UK and Australia. If we stay silent towards the criminals we cannot have a peaceful society. The more you fight with crime, the more peaceful you are. Islam wants peace on the Earth, that’s why Muslims want to stop terrorism of America and its allies. When you speak out against crime you have taken one step towards peace.

Two months ago a report on him said this:

A report today says this:

Monis was born Manteghi Bourjerdi and fled from Iran to Australia in 1996 where he changed his name to Man Haron Monis and assuming the title of Sheik Haron. He has gained media attention in the past for a “hate mail” campaign, protesting the presence of Australian troops in Afghanistan.
The campaign saw him and his partner Amirah Droudis post hate-filled letters to the families of dead Australian soldiers. The family of Brett Till, an Australian soldier killed by a roadside bomb in 2009, was just one of the families who received a letter.

When we refuse to identify the enemy, then we have lost already.