Is this the time of a great falling away as warned about so long ago? Christians will know what I am referring to here. The word apostasy has to do with falling away, and the New Testament often warns us about this. And it also speaks about some hard core rebellion and apostasy occurring before the Lord comes again.

A key passage here is 2 Thessalonians 2:1-4. This speaks about those who are falsely claiming that Christ has already returned. Paul says no, he has not, and goes on to say that a great falling away must first occur. Verse 3 says this: “Don’t let anyone deceive you in any way, for that day will not come until the rebellion occurs and the man of lawlessness is revealed, the man doomed to destruction.”

The term ‘rebellion’ used by the NIV, the ESV, the RSV etc., can also be translated ‘apostasy’ (NASB, HCSB, eg) or ‘falling away’ (ASV, KJV, eg). Here Paul ties it in with the return of the Lord. Of course Paul elsewhere speaks of such times, as in 1 Timothy 4:1: “Now the Spirit expressly says that in later times some will depart from the faith by devoting themselves to deceitful spirits and teachings of demons.”

Jesus had said similar things, especially in Matthew 24, where he speaks about the signs of the end of the age. Verses 9-14 are quite relevant here:

Then they will hand you over for persecution, and they will kill you. You will be hated by all nations because of My name. Then many will take offense, betray one another and hate one another. Many false prophets will rise up and deceive many. Because lawlessness will multiply, the love of many will grow cold. But the one who endures to the end will be delivered. This good news of the kingdom will be proclaimed in all the world as a testimony to all nations. And then the end will come.

Thus Jesus is fully in sync with Paul on warning of a great falling away. Now I raise all this not to get into another knock-down drag-out fight over all things eschatological. That is not at all my purpose here. So if you want to come here arguing for your favourite end-times theory, or wax eloquent on who the Antichrist is, or give us a detailed version of world events according to your prophetic calendar, please desist. I am not going there. 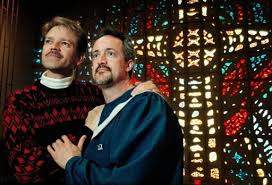 All that I want to do here is say that if we are indeed in such a time of a great falling away, then it seems to me that one primary indication of such apostasy is the massive rebellion against God and his word on the issue of human sexuality in general and homosexuality in particular.

I can see no greater example of a mass rebellion and apostasy in the church than on this issue. Given that I have already written three books on this, along with hundreds of articles, it is no surprise that I would think this way. And it seems to me that any level-headed biblical Christian would have to concur.

The homosexual invasion of the churches is found everywhere. Every day that goes by we find another so-called Christian leader or pastor declaring that he is going to embrace the homosexual agenda and jettison the clear teachings of Scripture.

Of course they won’t put it in those terms but that is exactly what they are doing. They are rebelling against God, and effectively spitting in his face as they declare that they know better than God in regards to all things sexual. What God calls an abomination and depravity they call a “gift of God” and something to celebrate and flaunt.

I had one such apostate elsewhere getting all excited over the fact that even more evangelical churches are proudly embracing sodomy. He posted about how “God is moving” in such places. I replied: “Yes God is moving – right out of these apostate churches. Ichabod.”

I was of course referring to the story of Eli’s daughter-in-law and the naming of her son. As we read in 1 Samuel 4:2, “She named the boy Ichabod, saying, ‘The Glory has departed from Israel’.” In this case the Philistines had just captured the ark of the Lord, the place where God dwelled.

That is exactly what happens when arrogant, defiant and blasphemous sin takes up residence in the churches. When men-pleasing apostates seek to celebrate and endorse clearly known sin in the house of God, then we know that God cannot remain in that place.

These reprobates celebrate the very things our holy God despises and calls an abomination. They praise what God condemns. And they attack God’s servants when they seek to stand for God and his word. They are the perfect embodiment of what Isaiah warned about so long ago when he pronounced a woe on those who call good evil, and evil good (Isaiah 5:20).

Such woe oracles contain a pronouncement of coming doom. That is how serious things have become. So we too have gotten to the place where we are calling vice virtue, and we are proud of it. And we are doing it in the very house of God no less! Thus God must act to protect his name and to keep his Bride pure. He must act to deal with this rebellion in the churches.

But I speak to this more fully here: billmuehlenberg.com/2010/09/09/separating-the-sheep-from-the-sheep/

Because of the great falling away concerning this issue, God must start separating those who are really his from all those who are hirelings, false shepherds, false prophets, false teachers, and false professors of the faith. And the issue of homosexuality is a razor sharp line of demarcation here.

The dividing line is quite plain: those who will agree with God and his word about these issues and those who won’t. Yes folk it is that easy. This is of course not the only litmus test for those who are true disciples of Christ and those who are not, but it is one such crucial test.

When you call God a liar on the issue of homosexuality, and claim that you are being more loving, more compassionate, and more fair by embracing the sin of sodomy and sodomite marriage, then you have clearly declared your hand here. You have rebelled against God and the clear teachings of Scripture.

So whether we are now in the time of a great falling away as predicted in Scripture is a moot point. But if it is, I would say that the great rebellion and apostasy on the issue of homosexuality is a perfect example of this happening.

20 Replies to “Homosexuality and the Great Falling Away”