In an age of widespread deception, the need to tell the truth, and repeat the truth, becomes our highest duty. And one of the most important truths that needs to be stated again and again is this one: under Islam the infidel has only one of three options: convert, die, or become a dhimmi.

We have 1400 years of Islamic history to see how this has played out. And we have plenty of dhimmis, or second-class citizens living little better than slaves under Islamic imperialism. Most are forced to live in such appalling conditions of servitude and self-deprecation.

But what is infinitely worse is when non-Muslim Westerners voluntarily take on the role of dhimmitude. When they willingly make themselves slaves to, and apologists of, Islam, then you know we are in dire straits. And we find this happening all the time, as I have on countless occasions documented here. 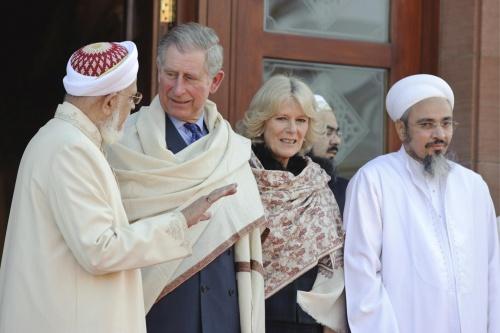 Let me offer three more recent shocking examples of this. They are enough to make your head spin – if not be lopped off, if we keep heading in this direction. The first has to do with the Church of England and Prince Charles. Of course Prince Charles has a long record of foolishly championing Islam while denigrating the faith he is supposed to defend.

As I wrote elsewhere, “This aversion to the host religion is best exemplified by Prince Charles. He goes out of his way to praise Islam as a religion of peace, while simultaneously minimising and denigrating Christianity, the faith he is meant to protect. Indeed, he has said that the King should not be Defender of the Faith (Christianity), but ‘defender of faith’. Interestingly, he has travelled extensively in the Muslim world, but has never once visited Israel.”
https://billmuehlenberg.com/2006/08/31/a-review-of-londonistan-how-britain-is-creating-a-terror-state-within-by-melanie-philips/

But it is the utterly apostate dupes in the CofE that deserve the greatest censure here. Consider how this news item begins: “Prince Charles’s coronation service should be opened with a reading from the Koran, a senior Church of England bishop said yesterday. The gesture would be a ‘creative act of accommodation’ to make Muslims feel ‘embraced’ by the nation, Lord Harries of Pentregarth said.”

What!? Say that again! The article continues:

The former Bishop of Oxford, who continues to serve as an assistant bishop in the diocese of Southwark, made the suggestion about the Koran during a House of Lords debate. He told peers the Church of England should take the lead in ‘exercising its historic position in a hospitable way’.
He said that at a civic service in Bristol Cathedral last year authorities had agreed to a reading of the opening passage of the Koran before the beginning of the Christian ritual. He said: ‘It was a brilliant creative act of accommodation that made the Muslim high sheriff feel, as she said, warmly embraced but did not alienate the core congregation. ‘That principle of hospitality can and should be reflected in many public ceremonies, including the next coronation service.’

Fortunately there are a few church leaders left in England who have not been mentally and spiritually lobotomised:

Simon Calvert of the Christian Institute think-tank said: ‘Most people will be amazed at the idea that a Christian leader would consider the use of the Koran at a Christian service in a Christian abbey. People are just so disappointed when senior Church of England figures lose confidence in the claims of the Christian faith.’
Andrea Minichiello Williams, a member of the CofE’s parliament, the General Synod, and head of the Christian Concern pressure group, said: ‘At a time when we are looking at what British values mean, we cannot have values in a vacuum. British values stem from our Christian heritage. We cannot pretend all religions are the same, or have the same benefits and outcomes for the nation.’
Douglas Murray, associate editor of the Spectator, said if Muslims were included in the coronation service, there must be room too for Hindus, Sikhs, and atheists. He added: ‘If there were to be a reading from the Koran at the coronation, surely as a matter of reciprocity, all mosques in the UK should have prayers for the King and the Armed Forces every week at Friday prayers.’

Exactly. Dhimmitude is always one-way traffic. Christians are expected to make massive concessions to Islam, while the favour is never returned. This is nothing more than appeasement, and a massive selling out of the Christian faith. It is apostasy pure and simple, and renegade church leaders like Harries should have been booted out ages ago, and not been allowed to spew his anti-Christian poison.

But England has long been in a bad way. The so-called conservative political leaders are also deceived dhimmies of the highest order. Consider this recent bit of insanity coming from Cameron’s Tories:

Anyone who criticises Sharia law or gay marriage could be branded an “extremist” under sweeping new powers planned by the Conservatives to combat terrorism, an alliance of leading atheists and Christians fear. Theresa May, the Home Secretary, unveiled plans last month for so-called Extremism Disruption Orders, which would allow judges to ban people deemed extremists from broadcasting, protesting in certain places or even posting messages on Facebook or Twitter without permission. Mrs May outlined the proposal in a speech at the Tory party conference.

Once again a few voices of sanity were heard here, and once again the indefatigable Christian Institute stood in the breech:

Simon Calvert, Deputy Director of the Christian Institute, said traditionalist evangelicals who criticise gay marriage or even argue that all religions are not the same could find themselves accused of extremism. “Anyone who expresses an opinion that isn’t regarded as totally compliant with the Equality Act could find themselves ranked alongside Anjem Choudary, Islamic state or Boko Haram,” he said. He added: “How many times a day do intellectually lazy political activists accuse their opponents of ‘spreading hatred’?

One final example of creeping sharia and dhimmitude of a high calibre comes from here in Australia. Consider this shocker of a headline: “Bendigo mosque backers ask non-Muslims to help fund the project”. Yes you read that right. The story opens:

The backers of a controversial plan to build a mosque in Bendigo want non-Muslims to help fund the project. Australian Islamic Mission Victorian spokesman Dr Seyed Sheriffdeen said his group would ask government authorities, local businesses and other organisations for assistance.
“If you look at the facility it’s an asset for the local community in Bendigo,” he said. “We will ask the local community to support this, they are the stakeholders of this project.” The Shire of Greater Bendigo has approved the plan, but opponents have appealed to the Victorian Civil and Administrative Tribunal with the hearing due to start this week.

Yeah right. Great idea. So let me simply reciprocate: I wanna go to Saudi Arabia and open a church there. Oh, and I expect the Saudis to fully help subsidise the church. Sure, sounds perfectly reasonable. After all, all religions are the same, and we live in one big multi-faith world.

The real madness here is that there will be plenty of utterly clueless Australian big cheeses, politicians, and even church leaders, who will happily go along with this plan. They will be quite keen to take taxpayer money as well and contribute to this project.

There is good reason why none of this moonbattery should be allowed to proceed. As I have written before, the mosque is not at all like a Christian church or a Jewish synagogue: https://billmuehlenberg.com/2014/03/28/the-significance-of-the-mosque/

For more on this, see here for the great work of Gavin Boby and his successful efforts in stopping the proliferation of mosques in the UK: http://www.raymondibrahim.com/islam/mosques-are-the-battleground-of-the-war-between-islam-and-the-west/

So here we find three more examples of runaway creeping sharia, and dhimmitude in high places. The Western world might as well just raise the white flag of surrender now, and allow all our lands to become part of the worldwide caliphate. We don’t need to wait for the Islamists to take over – we are already doing it to ourselves.