The fact that military and warfare imagery is found throughout the Bible tells us a few things. One, it may tell us that ideological pacifism is a position not fully squared with the biblical record, but we will save that debate for another time.

It also tells us that the life of the believer is not to be seen as one of partying, playing, vacations, cruise ships and a life of ease. The biblical picture one gets is that the people of God are engaged in constant warfare, battles, difficulties, attacks and struggles.

While rest in God of course is always on offer, the clear biblical picture is that the believer is involved in ongoing warfare. Primarily this is a spiritual battle we are engaged in of course, but it manifests itself on many other levels as well. Sometimes the fight is with yourself, as we war against sin, pride, self centredness and the like.

We also speak of being involved in a war against the world, the flesh, and the devil. This alone is a full-time struggle. Pretending that none of these battles exist, or that none of these enemies or opponents exist, is to be living in a world of Bible-denying delusion.

Thus we are on war footing. That phrase has been defined as “the condition or status of a military force or other organization when operating under a state of war or as if a state of war existed”. When we know that we are in a wartime situation, things change, and it is no longer business as usual.

Now I realise of course that most people prefer peace to war, and rightly so. When peace in this life is possible, then by all means it beats warfare. But sometimes we have no other options. Sometimes warfare is necessary. Sometimes to refuse to engage in battle means we allow a much greater evil to prevail. 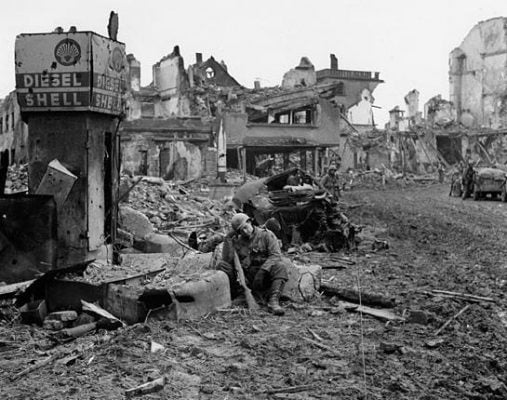 This year we celebrate the 70th anniversary of the end of the Second World War. I for one am continually interested in and fascinated by this great conflict. Here we have a pretty clear demarcation between good and evil, and here we find a very strong rationale for the rightness of just war theory. Sometimes war is necessary to prevent a much greater evil.

Fighting Hitler and the Nazis was a just cause. Seeking to stop his genocide and global domination was a good thing. Seeking to free the concentration camps and liberate the prisoners was a worthy goal indeed. And we can find some lessons in WWII which readily apply to the Christian life.

One lesson is that we may be in for the long haul. Most wars do not end overnight. Plenty of hardcore fighting must take place before the enemy is finally defeated and a just peace is secured. When the Allies launched their great counter-strike to retake Europe on June 6, 1944, after a rough beginning, it seemed to go well shortly thereafter with much progress made.

So much so that some felt it would be a short offensive, and soldiers were writing back to loved ones saying they might be home by Christmas. But of course things were not that quick and easy, and the Germans put up stiff resistance. For example the Battle of the Bulge in the Ardennes Forest would be the costliest battle for the Americans of the entire war, with some 75,000 casualties (killed, injured or missing).

So the heavy fighting would continue for some months more yet. On April 21, 1945 the Soviets reached Berlin, and on April 29 the U.S. 7th Army liberated Dachau. So the end was in sight, and finally, on May 8, Victory in Europe Day was celebrated.

Another lesson to be taken away from all this, as already referred to, is the great sacrifice which must take place in any war. No war is pain-free – it is always costly and monumental sacrifices must be made. Unless one is willing to offer one’s very life, no victory will be achievable.

In addition to the 75,000 casualties of that one battle, all totalled there were around a million US casualties for the entire war. The total Allied military deaths alone were some 14 million. That is a horrific number of lives lost. That is an ocean of blood which was shed.

But offering one’s life for the cause of freedom, for the resistance to tyranny and evil, is always going to be a costly thing. How can it not be? And in the Christian life, it is always costly to be a disciple of Christ. Obviously with something like the demonic evil of the Islamic State we see real blood being shed and actual lives being lost.

But even aside from such horrible martyrdom and persecution, to follow Jesus according to biblical standards is always costly, involving our whole being. To deny ourselves, to crucify the flesh, to say no to self, and to bear our cross daily is never easy. Those who think the Christian life is a piece of cake and a life of ease are likely not true disciples of Jesus Christ.

A final lesson to be learned from WWII, as well as from all war, is the importance of the foot soldier carefully and faithfully following and obeying their superiors, especially the Commander-in-Chief. In a time of war it is essential that soldiers pay heed to and follow the instructions of their commanders.

In the Christian life it is no different of course. Jesus expects full obedience. He is not the Lord of our life if we exercise only partial obedience, if we decide which commands to follow and which to reject, and if we think we can call the shots and tell God how things should be done. That is a recipe for disaster, as well as rank insubordination.

Jesus expects and demands of us our full allegiance. We are not here to tell him what to do. He is here to tell us what to do. If we love Jesus we will obey him, as he said repeatedly. This is especially vital in a time of war. To think we can run the show ourselves is in fact an act of treason.

As the next few months unfold I will undoubtedly write some more articles on the end of the war. There will be plenty of celebration and commemoration of this in the media over the coming months. While we celebrate the great sacrifices and courage of our forebears as they gallantly fought the evils of the Nazis, we do well to keep in mind the many spiritual lessons to be found here as well.

Let me conclude with just a few relevant quotes on all this:

“Warfare with the powers of hell is the experience of every individual member of the true church. Each has to fight. What are the lives of the saints, but records of battles? What were such men as Paul, and James, and Peter, and John, and Polycarp, and Ignatius, and Augustine, and Luther, and Calvin, and Latimer and Baxter, but soldiers engaged in a constant warfare?” J C Ryle

“I do not love the bright sword for its sharpness, nor the arrow for its swiftness, nor the warrior for his glory. I love only that which they defend.” J.R.R. Tolkien

“God has appointed this whole life to be all as a race or a battle; the state of rest, wherein we shall be so out of danger as to have no need of watching and fighting, is for another world.” Jonathan Edwards

“People who have no sense of conflict at all in their lives are patently just not Christians; they are in the sleep of death spiritually.” Martyn Lloyd-Jones

“When a nation calls its prime men to battle, homes are broken, weeping sweethearts say their good-byes, businesses are closed, college careers are wrecked, factories are refitted for wartime production, and rationing and discomforts are accepted – all for war. Can we do less for the greatest fight that this world has ever known outside of the cross – this end-time siege on sanity, morality and spirituality?” Leonard Ravenhill

4 Replies to “On War Footing”