Once upon a time there existed what was known as a free press. Back in those days the media actually tried to report the news, and do so in a fairly objective, impartial and neutral fashion. Those days are long gone. Today what we have is the mainstream media fully in the advocacy business.

Not only are they in the business of pushing the worldview of secular humanism; not only are they all about pushing political correctness; but they are obsessed with pushing the radical causes of the minority activist groups. And there is no greater group that they bow down to and worship than the militant homosexual lobby.

Thus we can say that a free and neutral press really does not exist anymore. Instead we have everywhere homosexual propaganda rags force-feeding the homosexual agenda on to the masses whether they like it or not. I just wrote recently that the media only covers one side of the story nowadays when it comes to homosexuality. As I wrote,

Any time a pro-homosexual piece appears in the media today, nine times out of ten an alternative point of view is just not heard. And if it is, they will get just one line at the very bottom of the article. That alone tells you how utterly homosexualised the entire mainstream media has become. Nothing critical of sodomy can ever be heard, and if it does get a hearing, it must be attacked mercilessly.

And we had yet another example of this yesterday. I thought I had seen it all, but this article has to be one of the most disgusting, pathetic and deplorable examples of media bias and anti-Christian bigotry I have seen in a long time. Although appearing in a mainstream paper, it might as well have come straight out of the homosexual press.

Indeed, I have no doubt at all that the journalist who did this shocking hatchet job is a homosexual. The entire article was one sickening paean to the ‘wonders’ of homosexuality, and one vicious attack on the ‘evils’ of Christianity. In the old days this would be reported to the Press Council and those responsible would have been strictly censored. But not anymore. 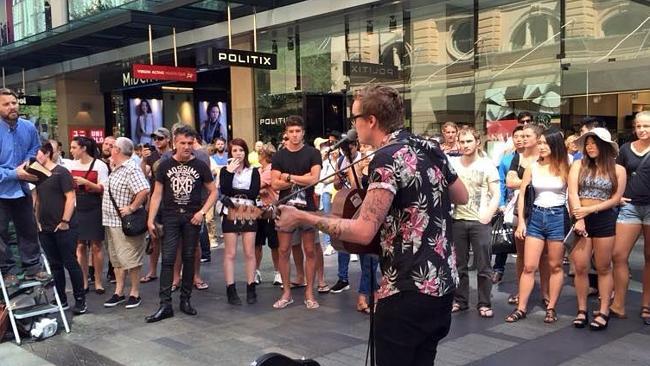 It concerns a street preacher in Sydney who was sharing the gospel just before the start of the annual decadence parade, the Mardi Gras. A street busker turned on him and shouted him down with his music. The newspaper made him out to be the hero of the millennia, all the while demonising the Christian.

This is probably the clearest example you will ever see of how actual news reporting has been completely ditched, replaced by advocacy and PC promotion. The entire piece was about singing the praises of this busker, as if he were Mother Teresa or even Jesus Christ.

And at the same time it used just about every single sentence to make this preacher out to be Attila the Hun or the very devil from hell. Thanks a lot for this impartial, unbiased and fact-based reporting Herald Sun. You guys are utterly despicable, and really should be put out of your misery.

And let me clue you in to a few home truths. For the homosexual activists and their willing stooges in the media, hate means anything or anyone who dares to disagree with their agenda. Thus to simply read from the Bible is seen as hate by these militants.

But of course we will never know if the preacher was actually preaching hate will we? He was not interviewed; he was not allowed to give his side of the story; he was not even quoted. All we know about him is from the Christophobes featured in this deplorable excuse for journalism.

Just imagine if some journalist dared to do the reverse here: pen a scathing piece on homosexuality, use words like hate over and over again, only quote Christians, and never once give the homosexual the right of reply. The entire world would be foaming at the mouth by now, the journalist would be sacked, and the newspaper roundly condemned.

But when it comes to attacking Christians, it is open season. Anything goes, and there never will be any accountability whatsoever. The Herald Sun, like the rest of the MSM, is now a law unto itself. It is no longer accountable, representative or even remotely interested in fairness or balance.

And this sodomy-promoting busker actually had the gall to lecture us on what Christianity is all about: “I’ve grown up in a church, and hating is a sin. It says that in the bible.” Um no, not quite. Actually, we are called to hate sin. God hates it and so should we.

Oh, and BTW, just how heroic was this busker? Certainly nowhere near as brave and beautiful as this wretched article makes him out to be. Attacking Christians is the easiest thing you can do nowadays. But would he ever dare to take on a Muslim in this fashion? Of course not. They are simply spineless wonders when it comes to Islam.

And let me remind these folks of a simple home truth. Right now homosexuals in the Middle East are blindfolded, taken up tall buildings, and tossed over the edge to a horrible death by devout Muslims. So does the Mardi Gras feature floats and marchers denouncing Islam? Of course not, just the usual demonic attacks on all things Christian.

And one final note: I have already heard clueless Christians critiquing the preacher here. Duh, go figure. Now I of course know nothing at all about this preacher or what he actually said, because the Herald Sun refused to allow him to speak.

One person elsewhere however told me this: “I know that preacher, and I can guarantee that he wasn’t preaching hate! He is a man of God who was there to preach the gospel and tell people to turn from their sin. If only there were more who had this man’s courage.”

My only word of advice for these pansy Christians who will actually side with the homosexual militants against their own people comes in the form of this story.

I don’t know which is worse: a totally sodomised MSM which no longer covers news but pushes homosexual spin on everything, or so-called Christians who will attack those who are actually doing something for the Kingdom from the comforts of their own armchairs.

20 Replies to “We No Longer Have a Free Press, Only a Homosexual Press”