If you don’t know what I am talking about here, perhaps I need to add a fourth response: that of rank ignorance. This is of course the university in Kenya where 148 people – mostly Christians – were killed by devout Muslims last week.

This horrific terror attack was simply the latest in an ongoing pogrom by Islamic jihadists aimed against infidels in general and Christians in particular. Since 9/11 there have been 25,518 such deadly terror attacks carried out by dedicated followers of Islam. All this by the political ideology that seeks to present itself as a religion of peace.

Here I want to take note of at least three varying responses to the massacre. The first is a political and ideological response, found in much of the West and in much of the media, but especially found in the response of the Obama White House. 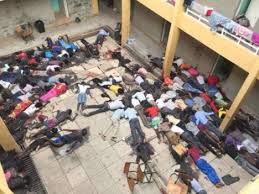 But plenty of other Western leaders and Western media outlets took the same path of dissimulation and appeasement. This is now the regular response from so many in the West: refuse to ever use the ‘I’ word, and refuse to point out the inconvenient truth that a war of genocide has been declared against Christianity by these folks.

A second response may really be said to be a non-response. I refer to the overwhelming silence and apparent apathy on the part of Christians throughout the Western world. With rare exceptions, the Western church largely does not seem to give a rip about this, or other such tragedies.

Western Christians are far too busy having their ‘best life now’. They have been brought up on a me-first gospel all their lives, so why should we expect anything different now? They were told that if they come to Jesus, all their problems will be solved, they can have everything they want, they can be rich and successful, and above all else, they can just be happy all the time.

I have written about this appalling situation often, including just a few days ago: billmuehlenberg.com/2015/04/03/your-best-life-now-not/

An earlier piece also deals with this major problem in Western Christianity: billmuehlenberg.com/2013/04/11/they-suffer-and-die-while-we-party/

In contrast, the real gospel of Jesus Christ is of course all about self-denial and self-renunciation. It is all about saying no to self, crucifying the flesh, and taking up our cross daily. That is the biblical gospel which is heard so seldom today in the West.

No wonder most Western Christians don’t give a rip about 150 murdered Christians in Africa. Out of sight and out of mind. They are far too busy with their best life now to give a rip about such matters. Indeed, most prefer to not even hear about such things, because it takes the edge off their greedy and selfish lifestyles.

Indeed, so engrossed are they with seeking to be happy, satisfied and wealthy that they act as if the words of Jesus on suffering brethren don’t even exist. It is as if Jesus never said “I was in prison and you came to Me” in Matthew 25:36.

In that passage (vv. 31-46) Jesus speaks about those who are his true disciples. He says that to the extent that people visit those who are imprisoned for his sake, they do it unto him. That in part is the sign of a true follower of Christ. But we are so busy in the West living a life of self and pleasure that the sufferings, imprisonment and killing of our brothers and sisters around the world does not even cross our minds.

Read that entire passage and see what extremely strong words Jesus has for those who do not care about their own people who are suffering so greatly for the gospel.

A final reaction to this tragedy is also a Christian response, but this time from an apologetic approach. Once again another horrific tragedy raises questions of “Where was God?” and “Why did he not do something about this?” It is not my intention to here enter into yet another major discussion of theodicy and philosophy of religion.

But I just read a piece on this by an African believer who does wade into all this. J.M. Njoroge, who hails from Kenya, has just posted an article on the Ravi Zacharias ministries website entitled “Where was God during the Garissa University terrorist attack?”

He says that we can all at least pray, and then writes:

But, judging from previous experiences in Kenya and elsewhere, it is reasonably accurate to expect that the world will soon forget, and move on to another crisis. It can be overwhelming to think of trying to help in the midst of all that goes wrong in our world, and it is understandable that we would feel helpless in the face of it all.
We need to let the victims know that they are not forgotten, and our promise to stand with them must be backed by action. Those who work with organizations like Wellspring International, RZIM’s humanitarian arm, know firsthand how meaningful it is to reach out to those who feel abandoned when their crisis no longer makes the headlines. We need to live up to the conviction many of us claim to hold – that all lives, from Los Angeles to Lagos and from Garissa to Geneva, matter.

As far as the intellectual problem of evil he states:

By creating us as moral beings, God gave us the ability to choose, and with that ability came the possibility of evil. Our ability to choose is at once God’s most powerful means of conferring dignity upon us as well as a deadly gift. It all depends on how we choose to use the gift. Nevertheless, we need to note that God’s jurisdiction extends beyond this life, and when all is said and done, every human being will be held accountable for his or her actions. So the intellectual side of the equation is easier to address, and it is not the main issue that troubles us in the face of tragedy.

The emotional/experiential response is harder to deal with. He mentions how God is not aloof from suffering, having sent his own son – who was perfectly innocent – to die a horrible death in our place so that we can be reconciled to God. He then concludes with these words:

A story that has emerged from Garissa offers us a powerful analogy. One of the students, Hellen Titus, told the Kenyan media how she was able to escape from the tragedy as the shooters hovered over her and her fellow students. She covered herself with someone else’s blood and was thereby mistaken for dead. That is exactly what Jesus has done for us; He invites us to be covered with His blood so that we can live. And when we are thus protected, we may grieve, but we do not grieve like those without hope, and we do not fear those who can only kill the body but cannot touch the soul.
So, why doesn’t God intervene in these types of situations? He has.

While so many politicians simply exploit such situations for their own ends, and so many believers in the West take an apathetic approach, God never misses any of our suffering, and has done all he can to deal with it, while respecting our ability to make real choices.

And those who avail themselves of the precious sacrifice of Jesus on their behalf have this wonderful hope in them: one day all pain and suffering will come to an end, and all evil will be done away with. As we read in Revelation 21:4:

“He will wipe every tear from their eyes. There will be no more death or mourning or crying or pain, for the old order of things has passed away.”

5 Replies to “Three Responses To Garissa”