By now most Victorians, and perhaps many Australians, will have heard the great news: Luke Shambrook is alive. The 11-year-old Victorian boy with severe autism had been lost in the bush since Good Friday. He had wandered away from a family campground and had been the subject of a frantic search for the past four days.

But just hours ago he was found. As one report states: 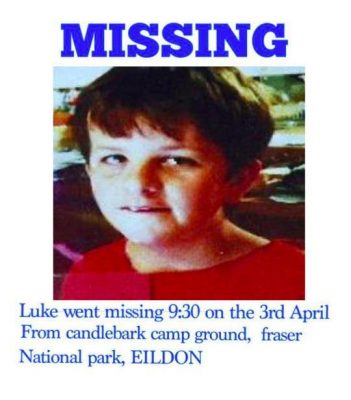 Victoria Police vision has revealed the moment a missing boy was found in dense bushland, after his desperate family and rescuers had been searching for four days. The video shows Luke Shambrook appearing to look up at the police helicopter before a member of the search and rescue team slides down an embankment to reach the 11-year-old boy.
Leading Senior Constable Brad Pascoe from Victoria Police Air Wing said the moment was “amazing”.
“Just out of the corner of my eye I just caught a little flash of something,” he said. “It was enough to make me get the guys to turn the aircraft around and go back and have a further look.”
Leading Senior Constable Pascoe said they were able to zoom the camera in and confirm it was Luke. “We were absolutely over the moon obviously, all of us in the crew are parents ourselves and we can only imagine what the parents of Luke have been going through,” he said. Earlier, police involved in the search for the missing boy described his discovery in dense bushland as a “miracle”.
The autistic boy was reunited with his overwhelmed parents earlier today and has arrived at the Royal Children’s Hospital in Melbourne by ambulance for further assessment. Despite being missing for four days and four nights, Luke only requires treatment for hypothermia, fatigue and dehydration.
Luke’s uncle Peter Roberts spoke on behalf of his family to thank everyone who had been involved in the search for his nephew. “We’ve been overwhelmed by the response and we’re very thankful that we live in a society that puts a lot of effort into finding children who go missing,” he said.
Luke was found in the Lake Eildon National Park near Skyline Road at around 11.55am, after four days of desperate searching from volunteers, SES crews, the police dog squad and thermal imaging via helicopter.
A police helicopter spotted him moving around 3km from where he was last seen. Search teams used chainsaws to clear a path for his removal from the bush. Police confirmed the boy appeared to be well and was fully dressed, apart from his beanie, which was found by rescuers yesterday.

Incredibly, he is recovering very well and may even be released to a general hospital tonight. It was an amazing end to four days of fear, anguish, alarm and much prayer. While not all stories like this finish with such a happy ending, this one was terrific news indeed.

Of course several spiritual realities come to mind in relation to all this. On the first Good Friday another person was thought to be lost. While many had hopes for young Luke, most people 2000 years ago thought that when Jesus breathed his last on the cross, he was a goner.

Indeed, within days the disciples had gone back to their old day jobs, including fishing. But a few days later everyone was amazed when Jesus appeared to them, alive and well. He too was gone for almost as long. It really was a miracle that he came back alive.

It was a resurrection miracle. Many are saying that young Luke’s survival and being found was miraculous as well. Well, perhaps not of the same order, but yes, it is amazing indeed that he made it through all by himself this whole time. God’s providential hand was certainly upon him.

Another lesson is this: we put plenty of effort into that which we think is of great value. In this case, not just family members and friends, but all sorts of folks, even complete strangers, along with fellow campers, engaged in this massive hunt for Luke. Obviously a parent would do anything to find their missing son.

The Bible speaks to this idea of putting great effort into what we value, and looking with great intensity for something which we have lost. Jesus had a number of parables about this, such as the parable of the pearl of great price (Matthew 13: 45-46). As I wrote in another article:

We should make God, and His Kingdom, the ultimate treasure which we value above everything else. In Luke 15 for example he offers us three such parables: the parable of the lost sheep (1-7); the parable of the lost coin (8-10); and the parable of the lost son (9-32). And in Matthew 13 we have two more of these parables: the parable of the hidden treasure (v. 44) and the parable of the pearl of great price (45-46).
They all speak to seeking after that which is of immense value, a treasure which consumes all our attention until it is found. The first three speak of God’s great love for the lost, and how very valuable he considers every single one of us. The last two deal with the overwhelming importance of seeking first the Kingdom of God, and paying any price to find it.
When we see God and his Kingdom as the greatest possible good, we will sacrifice anything to obtain him and it. No price is too big, no effort too large, and no sacrifice too great, to receive the greatest thing in this life and the next. Such zealous and dedicated searching for what is of ultimate value should not sound very strange to us.
Indeed, people do it all the time. We all put huge efforts into getting what we think is of great value and importance.

People will do almost anything to make money, become famous, snatch a good career, or get the girl (or boy) of their dreams. These parables remind us that only one thing is really of such high value and worth all our efforts to find. Seeking Christ and his Kingdom intensely and relentlessly should be the main goal of every one of us.

But sadly that is not always the case. But it should be. Instead of seeking to be rich or famous or successful or accepted, we should be seeking just one thing. We will turn half the house upside down if we lost our mobile phone, or a fifty dollar bill.

Do we look for the Saviour with the same intensity? Is he the pearl of great price that we will concentrate all our efforts on? Does everything else pale into insignificance until we finally find the greatest thing of all: right relationship with our Creator and Judge?

So many people prayed that young Luke would be found. If only Christians prayed with the same intensity and fervour and persistence for the lost. Undoubtedly many believers do pray for lost loved ones and relatives, even on a daily basis.

But can we all not do more, given such high stakes? Do we travail in tearful prayer for those we know who are not yet right with God through Christ? Do we put in the same time and effort to see them come into the Kingdom that these people – even strangers – did to find young Luke?

Praise God that he is now safe and well. Lots of prayer, along with a lot of work and sacrifice made his recovery possible. And that is likely the combination needed to see our friends and family come to Christ as well.