Does showing compassion make one a hypocrite? No, of course not – well, at least not necessarily. But I have seen far too many people just recently going on and on about compassion and mercy in a rather hypocritical fashion, and I for one am growing a bit tired of it to be honest.

In fact, I have been really quite astonished at the degree of duplicity and hypocrisy being exhibited by so many. While this of course occurs often, it has been on display big time over recent headlines about what has transpired in Indonesia. There are a number of examples of obvious hypocrisy going on here.

Let me mention just a few of them. First, far too many of these people going on and on about the death of two convicted criminals are utterly silent on other cases of people being put to death. People I never hear from or who are utterly silent on the abortion holocaust are all of a sudden all over the place on this issue. 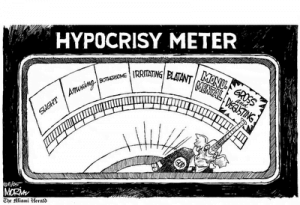 Indeed, they are silent on all sorts of killings, such as the Islamic war on Christians. And they also seem silent on many other things which are so very near the heart of God, such as the ongoing attack on marriage and family. Why do I hardly ever hear these believers discussing these vitally important issues?

Sure, some of the folks carrying on about the death penalty (DP) have spoken about some of these other matters. So it is not them that I am mainly concerned about here (although I think they are dead wrong and biblically amiss to foolishly equate the murder of innocent babies for example with the just punishment of convicted criminals by something ordained by God himself).

A second case of hypocrisy is the selective emphasis on one or two aspects of God and his nature. These Christians claim to represent God yet they have basically latched on to one aspect of who God is, while ignoring much of the rest of who God is. They are so very proud to proclaim that they ‘stand for mercy’ and the like but I never seem to hear a peep out of them standing for things like justice.

But he is more than just merciful. He is also just. He is also holy. He is also pure. He is also righteous. But all these attributes of God seem to be non-existent for so many of these believers. It is as if God is only merciful and nothing else.

But to pick one of his attributes and pit it against all the rest is not only completely unbiblical, but it is how most cults and heretics tend to operate. We need the full counsel of God here, and we need to accept God in all his fullness, and not just pick and choose those aspects of God that we happen to prefer, or that make us feel good.

A third clear-cut case of hypocrisy has to do with the selective outrage on display here. I don’t think I have ever heard any of these compassionate types say a word about how their hearts are going out to all those who died because of the drugs sold to them for profit by the drug smugglers. Not a peep about all the grieving families left behind either. Out of sight, out of mind it seems.

Just where are their second chances? How about their ability to hear the gospel message? They do not have those chances of course. They are dead. But these folks carrying on about compassion seem to have very little of it for these poor victims of the drug trade.

They get all worked up about one thing, but something very similar which also results in a tragic loss of life is completely ignored or minimised. Why is that? If I actually heard them going on day after day about all the deaths due to heartless drug smugglers, I would be a bit more receptive to their current concerns.

Fourth, there have been plenty of these folks chastising and chewing out others who happen to differ from them, complaining that at least they could have waited a while before commenting on this since the pair had only just been executed. Yet I noticed that these very same folks posted one thing after another concerning their anti-DP campaign – on the very same day as the execution! Um, hypocrisy much? (And please note: this article has appeared a full day after the event!)

Fifth, there is the obvious and glaring hypocrisy of some of these folks who shout about compassion and mercy and so on, yet will treat me and others they disagree with in a most uncompassionate and unmerciful manner. They think (rightly) that Christians should be merciful and gracious, but when it comes to those with a differing point of view it seems all this much-vaunted mercy and grace goes straight out the window.

A final example of hypocrisy is not only the worst of the hypocrisy on display here, but it is also blatant sinful idolatry which needs to be repented of. I refer to the ultimate in idolatrous hypocrisy, when believers go on and on against something that God himself has instituted: the death penalty. The case for this I have made elsewhere: billmuehlenberg.com/2007/10/11/on-capital-punishment-part-1/

I have lost count of how many times I have seen and heard ‘Christians’ say that the death penalty is barbaric, inhumane, terrible, awful, and should have no place in any society, etc. They claim it is evil and must be done away with altogether. Um, so what these folks are really saying is this: ‘I am far more merciful, fair and compassionate than God is.’

Yes, that is in effect exactly what they are saying. They really do believe they are morally superior on this issue, and they are actually taking God to task for even daring to have initiated the death penalty. What a shocking thing to insinuate: that God is wrong about this and that we creatures can do a better job of running the universe. That to me is the height of arrogance and insubordination, and is the most worrying thing I find about some of these folks.

There of course would be other forms of appalling hypocrisy going on here, including national hypocrisy. It is a bit rich of a nation which happily allows the deaths of 100,000 innocent unborn babies a year to go on a moral bender about the death of two convicted drug smugglers in another country.

As one news item notes, “Australia has not withdrawn ambassadors when other Australian citizens have been subjected to the death penalty, including when convicted Australian drug smuggler Van Tuong Nguyen was executed in Singapore in 2005.”

However my beef here is primarily with individuals who are so incensed and so emotionally driven about all this that they seem to be blissfully unaware of all the hypocrisy they are involved in. If you claim to be a Christian and hate the DP so much, that is up to you. One day you will have to explain to God why he was wrong about this and you are right.

But spare us all the constant hypocrisy please. It really does become so very off-putting. And it really does make your case appear to be just so much emotive and knee-jerk reactionary political correctness I am afraid.

And a quick word about the executed pair: if one or both indeed became Christians, then the great news is they are now with Jesus. That is fantastic. We of course still must pray for their grieving families and loved ones. And I will continue to also pray for the grieving families and loved ones of those ravaged and killed by drugs sold to them by others.

30 Replies to “The Hypocrisy of ‘Compassion’”