A homosexual and a Muslim walk into a bar, and the bartender asks him what he’ll have. OK, so that was a lousy attempt at humour, but it was designed to make a serious point: today the homosexual activists and the Islamic activists are becoming almost one and the same. Both are using similar means to achieve similar goals.

How so? I am glad you asked. Islam of course is seeking to take over the entire world, and see everyone come under the yoke of a universal caliphate. As there is no separation of mosque and state in Islam, everyone is expected to submit to sharia law – remember, “Islam” means submission.

In similar fashion, the homosexual lobby wants everyone to submit to its agenda, and they are more than happy to use the force of law to achieve their aims. They want all dissent crushed and all recalcitrants punished. I have documented countless cases of this already happening, where those who dare to disagree with the radical homosexual agenda have lost their jobs, been fined, or even jailed. 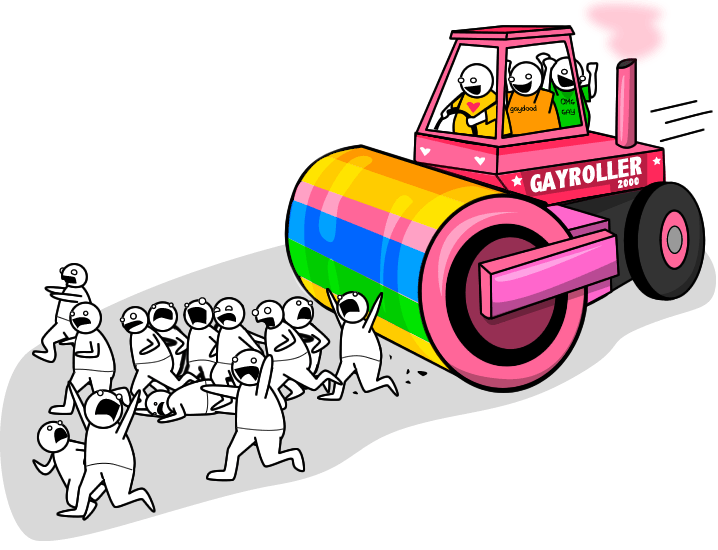 And things are getting worse by the day. I have documented hundreds of such cases of homosexual sharia in my books and my articles. In that sense both Islamic sharia and homosexual sharia are identical: both are stripping away our freedoms, dissing democracy, and strangling the rights of ordinary citizens.

Whenever Islam becomes the dominant political ideology, sharia is established, democracy is jettisoned, and those who do not fit in are turned into hapless dhimmis. It is no different as the homosexual juggernaut continues to steamroll its way throughout the West.

Freedom of conscience, freedom of speech, and religious freedom are all being trampled on as the homosexual activists use the heavy hand of the law to ensure that everyone submits, and no one demurs. Thus the secular left state is marching arm in arm with the homosexualists to enforce their coercive utopianism.

The odd thing about all this is how remarkably things have changed. When I was a radical leftist in the 60s, fighting for homosexual rights and every other sort of radicalism, we kept demanding that the state be kept out of the bedroom. Indeed, we wanted the state out of everything. We were anarchists who thought the state should not interfere with anything.

We said the state must recede while anything goes sexually, morally and culturally. But all this has now gone in reverse, with the militants demanding that the state gets involved in every aspect of their agenda. And freedom and democracy are suffering big time as a result.

But don’t take just my word for it. One person who certainly cannot be accused of being of the religious right has recently said the same thing in an important article. Reflecting on the recent Irish vote on homosexual marriage, Brendan O’Neill, editor of spiked, discussed this worrying trend in “The trouble with gay marriage”.

He is worth quoting at length:

What we have here is not the politics of autonomy, but the politics of identity. Where the politics of autonomy was about ejecting the state from gay people’s lives — whether it was Stonewall rioters kicking the cops out of their bars or Peter Tatchell demanding the dismantling of all laws forbidding homosexual acts — the politics of identity calls upon the state to intervene in gay people’s lives, and offer them its recognition, its approval. For much of the past 50 years, radical gay-rights activism was in essence about saying ‘We do not need the approval of the state to live how we choose’; now, in the explicit words of The Politics of Same-Sex Marriage, it’s about seeking ‘the sanction of the state for our intimate relationships’. The rise of gay marriage over the past 10 years speaks, profoundly, to the diminution of the culture of autonomy, and its replacement by a far more nervous, insecure cultural outlook that continually requires lifestyle validation from external bodies. And the state is only too happy to play this authoritative role of approver of lifestyles, as evidenced in Enda Kenny’s patronising (yet widely celebrated) comment about Irish gays finally having their ‘fragile and deeply personal hopes realised’.
What is being sought through gay marriage is not the securing of rights but the boosting of esteem. And this is a problem for those of us who believe in liberty. For where old, positive forms of social equality were a narrowly legal accomplishment, concerned simply with either removing discriminatory laws or passing legislation forbidding discrimination at work or in the public sphere, cultural equality is far more about… well, culture; the general outlook; even people’s attitudes. It is not satisfied with simply legislating against discrimination and then allowing people to get on with their lives; rather, it is concerned with reshaping the cultural climate, discussion, how people express themselves in relation to certain groups. In the apt words of the Yes campaign, this goes ‘beyond the letter of the law’. It is undoubtedly the business of society to ensure social equality for gays, so that they may work and live as they choose free from persecution or harassment. But is it the job of society to ensure that there is parity of esteem for gays? That they feel good? That they feel validated, respected? I would say no, for then we invite the state not simply to remove the barriers to gay people’s engagement in public life but to interfere at a much more psychic level in both gay people’s lives, in order to offer ‘sanction for their intimate relationships’, and in other, usually religious people’s lives, in order to monitor their refusal to validate gay people’s lifestyles and offer them ‘support, kindness and respect’.
This is why we have seen, across the West, the bizarre ‘gay cake’ phenomenon, where there are more and more cases of traditionalist bakers (and other businesses) being purposefully approached by campaigners to provide services to gay weddings. The aim of this very modern form of religious persecution is to discover and expose those whose attitudes have not yet been corrected by the top-down enforcement of parity of esteem, of protected feelings, for gays. That cultural equality is concerned not merely with altering laws, but with reshaping culture and even belief itself, is clear from the growing trend for harassing those who do not bow before the altar of gay marriage. Joan Burton made clear that this trend will now intensify in Ireland, when she said there will be no ‘conscience clause’ in the New Ireland: it would be intolerable, she said, to ‘exclude some people or some institutions from the operation of marriage equality’. That is, all must agree, all must partake; there can be no room for the exercise of individual conscience when it comes to the engineering of a new cultural climate.
What Ireland crystallises is that gay marriage has nothing to do with liberty. The presentation of this as a liberal, or even libertarian, issue is highly disingenuous. For in truth, gay marriage massively expands the authority of the state in our everyday lives, in our most intimate relationships and even over our consciences. It simultaneously makes the state the sanctioner of acceptable intimate relationships, the ultimate provider of validation to our lifestyle choices, while empowering it to police the cultural attitudes and consciences of those of a more religious or old-fashioned persuasion. This is bad for gays, because it reduces them, in Kenny’s words, to ‘fragile’ creatures who require constant recognition from others; and it is bad for those uncomfortable with gay marriage, since their ability to act in accordance with their conscience is limited. Making the state the validator of our intimacies and the policer of our moral outlooks is a very dangerous game.
This goes some way to explaining why every single wing of the Irish state supported gay marriage, from the police, who proudly waved the rainbow flag, to all the political parties, the public sector, the health establishment and the cultural establishment. It’s because they recognise, at a gut level, that unlike pretty much every other demand for liberty or equality in modern times, the campaign for gay marriage does nothing to threaten their authority — on the contrary, it extends it, in a way that the most authoritarian among them could only have dreamt of.

I encourage you to read his entire article, but at the very least, reread the quote I have presented above. He nails it exactly. This is all about protecting a minority group’s feelings, enforcing the social acceptance of a high-risk lifestyle, and using the coercive powers of Big Brother to implement their totalist agenda.

This is about homosexual sharia in other words, and it is every bit as dangerous and threatening to liberty as is Islamic sharia.

12 Replies to “Homosexual Sharia In Action”