Sin leads to more sin, and error leads to more error. When we reject God and his Word – even if claiming to represent him – we begin the steep descent into increasing rebellion, idolatry and apostasy. We have the entire Old Testament to give us clear examples of this.

And the New Testament further warns against this, reminding us over and over again to stay clear of sin and deception. Yet we find this happening all the time, as if the warnings of Jesus and the disciples were never given. Consider the sad case of Swedish church leader Eva Brunne. 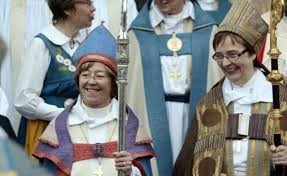 We learned about her six years ago when the openly lesbian Lutheran was to be ordained. Thankfully some church leaders did not go along with this, and made a very public display of their disagreement:

Anglican bishops from England and Northern Ireland have rebuffed invitations to attend the ordination of the openly gay Eva Brunne to be the next Bishop of Stockholm. Five bishops from various levels within the Anglican Church, including Archbishop of Canterbury Rowan Williams, have decided not to attend the November 8th ceremony, the Dagen newspaper reports.
Alan Harper, a bishop from Armagh in Northern Ireland, is also reported to be observing a moratorium on the ordination same sex bishops. Coming just three weeks after Sweden granted same-sex marriages the same legal status as those between heterosexual couples, Brunne’s appointment in May 2009 to be the next bishop of the Church of Sweden’ Stockholm Diocese raised eyebrows in Sweden and abroad.
As the Church of Sweden has taken a more welcoming stance toward homosexuality, exemplified most recently in the October 22nd decision to allow church weddings for gay couples, its relations with the Church of England have become increasingly strained.

Her rejection of biblical morality has not stopped there, and she now is proud to reject the exclusivity of biblical truth claims as well. Consider this news item from just a few days ago:

Bishop Eva Brunne has proposed to remove the Christian symbols of the Seamen’s Church in Freeport to make it more inviting for visiting sailors from other religions. The bishop wants to temporarily make the Seamen’s Church available to all, for example by marking the direction of Mecca and removing Christian symbols, as is already done in common prayer rooms at airports and in some hospital chapel….
The proposal has triggered protests. Patrik Pettersson, priest of the Oscars parish in Stockholm, thinks that the proposal is noteworthy and writes on his blog: “The church chapel cannot reasonably be equated with prayer rooms at airports and hospital chapels anyway. The Christian churches and chapels are not public areas at any time.”
And Seamen’s Mission Director Kiki Wetterberg does not agree with the bishop. “I have no problem with Muslim or Hindu sailors coming here and praying. But I believe that we are a Christian church, so we keep the symbols. If I visit a mosque, I do not ask them to take down their symbols. It’s my choice to go in there,” she says to the newspaper Dagen.

Remove crosses and point the way to Mecca? What does that have to do with defending the truth claims of Christianity? Absolutely nothing of course. Instead, it has everything to do with promoting the false religion and dangerous political ideology of Islam.

This type of “interfaith dialogue” comes straight out of the pit of hell. Muslims need to learn about the truthfulness of Christianity, not be reinforced in their deception. Making things easier for Muslims to remain Muslim is not how we proclaim the Christian gospel.

And that is not how we are going to reach Muslims, moving them from darkness to light. One might as well throw away Bibles and offer atheists free copies of books by Dawkins and others in order to “reach” them or make them feel more welcome.

As mentioned, the rot of course set in a long time ago. If a church thinks it can have leaders who live in known, defiant sin and rebellion, then of course all the rest of the Christian message is going to be abandoned as well. This is as inevitable as night following day.

This is a prime example of a church and its leadership in deep apostasy. Christ has been rejected and the world embraced. These “enlightened” church leaders may think this is the way forward, to better reach out to folks, but of course it is simply the way backward – back to paganism and perversion.

Compromise never works with the gospel – it is always all or nothing. Either Jesus and the Word are proclaimed uncompromisingly and boldly, or we might as well just give up any pretence of being his representatives. Then we might as well just turn the churches into gay discos or Islamic meeting places. Oh wait, that is just what they have already done in Sweden.

All of God’s great servants have warned against compromise and worldliness. We need to listen to their voices afresh. Let me close with a few of them here:

“We who preach the gospel must not think of ourselves as public relations agents sent to establish good will between Christ and the world. We must not imagine ourselves commissioned to make Christ acceptable to big business, the press, the world of sports or modern education. We are not diplomats but prophets, and our message is not a compromise but an ultimatum.” A. W. Tozer

“The chief danger of the Church today is that it is trying to get on the same side as the world, instead of turning the world upside down. Our Master expects us to accomplish results, even if they bring opposition and conflict. Anything is better than compromise, apathy, and paralysis. God give to us an intense cry for the old-time power of the Gospel and the Holy Ghost!” A. B. Simpson

“No compromise is what the whole gospel of Jesus is all about. In Matthew 6:24 Jesus says, ‘for I tell you…no man can serve two masters’. In a day when believers seem to be trying to please both the world and the Lord (which is an impossible thing), when people are far more concerned about offending their friends than offending God, there is only one answer: deny yourself, take up your cross and follow him Jesus (Luke 9:23-24)” Keith Green

“Here is the great evangelical disaster – the failure of the evangelical world to stand for truth as truth. There is only one word for this – namely accommodation. The evangelical church has accommodated to the world spirit of the age. First, there has been accommodation on Scripture, so that many who call themselves evangelicals hold a weakened view of the Bible and no longer affirm the truth of all the Bible teaches…. This accommodation has been costly, first in destroying the power of the Scriptures to confront the spirit of our age; second, in allowing the further slide of our culture.” Francis Schaeffer

“The chief danger of the twentieth century will be religion without the Holy Ghost, Christianity without Christ, forgiveness without repentance, salvation without regeneration, and heaven without hell.” William Booth