You would have heard the news by now: under the cover of darkness workers removed a statue of the Ten Commandments from an office in Oklahoma. The story itself has been widely reported, and this is how one news item covers it:

Workers began removing a Ten Commandments monument from the grounds of the Oklahoma Capitol late Monday in accordance with a court order. The Daily Oklahoman reported that the 6-foot high monument would be reinstalled outside the Oklahoma Council of Public Affairs, a conservative think tank.
A contractor hired by the state began removing the monument shortly after 10:30 p.m. local time. The works comes after the Oklahoma Supreme Court’s decision in June that the display violates a state constitutional prohibition on the use of public property to support “any sect, church, denomination or system of religion.”
The state is paying the contractor about $4,700 to remove the monument and take it to the Oklahoma Council of Public Affairs’ offices a few blocks away, Office of Management and Enterprise Services spokesman John Estus told the Associated Press.
The Daily Oklahoman reported that the private contractor was hired to move the 4,800-pound monument out of concern that state workers could not safely do the job without damaging or destroying it.
The Oklahoma Highway Patrol had increased security around the monument earlier Monday, and barriers were erected to keep visitors from getting close to it. Estus said the decision to remove the monument under the cover of darkness was made to avoid disturbing workers at the Capitol and to keep protesters from demonstrating while heavy equipment was being used to detach the two-ton monument from its base. 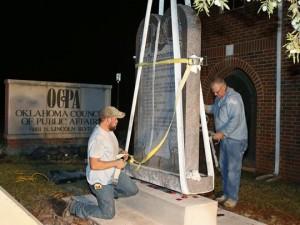 All this is so very bizarre when we consider the religious roots of America’s founding. Overwhelmingly the Founding Fathers were people of faith, even if some were just deists, and the consensus was that the nation could not survive without faith and biblical morality – as expressed by the Ten Commandments.

I discuss the Christian heritage of America in various articles, so will not need to fully repeat myself here. See here for more on this: billmuehlenberg.com/2014/04/12/america-christianity-and-secularism/

In that second article I wrote:

Very few people would realise it, but there is a very real and vital connection between freedom, religion and morality; between liberty, faith and virtue. And perhaps nowhere was this concept so explicitly and strenuously promoted and championed than in America during the time of its founding.
The American Founding Fathers wrote extensively on the vital importance of both personal faith and social morality if their experiment in freedom was to succeed. They knew that a political system alone, no matter how well conceived, would not long last unless the citizenry was a virtuous people.
And they knew that freedom, no matter how important, would simply give way to license, and a new tyranny, unless the population were solidly religious and moral. Indeed, the founding of America was really one of the most unique and amazing events in modern history.

Let me quote just one of these founders who made this so very clear: John Adams said this on October 11, 1798: “Our Constitution was made only for a moral and religious people. It is wholly inadequate to the government of any other.”

Despite all this, the secularists believe that every trace of Christianity must now be removed from public and political life. While the First Amendment to the US Constitution offers us freedom of religion, the Christophobes want it to mean freedom from religion. I discuss elsewhere the real meaning of the separation of church and state doctrine: billmuehlenberg.com/2006/10/20/separation-of-church-and-state/

The atheists and secularists have declared war on God, and want Christianity to be completely removed from American life – at least in every public aspect. But they are nice enough to allow us a bit of religion if done in private in our own homes – and even there it is now being targeted.

Of course this one episode in Oklahoma does not make for a war on religion – not by itself. As an isolated incident it might not seem like much of a big deal. But when you add it to the hundreds and thousands of other cases in the US where the God-haters have been running amok, then a serious cumulative case certainly emerges.

Pulling prayer and the Ten Commandments out of the schools for example is not just an outward act. It is also designed to totally secularise life in not just our schools, but in public altogether. While the secular state can never fully suppress internal faith, it sure can make it hard to be lived out in any meaningful manner.

Indeed, why did my mind immediately spring to thoughts of Communist atheists destroying churches in Russia and China, or the militant IS destroying all things Christian in their demonic rampages? Why is the public expression of faith just so repulsive to these folks?

I am not aware of Christians seeking to ban the religion of secular humanism from the public square. Indeed, the atheists have free rein in the West to do their thing, with no fear of reprisals. But any trace of the Christian faith must be removed it seems.

Make no mistake here: a war has been declared on faith and freedom, and leading the charge in the West are the secularists and atheists who seem to hate God with a passion – the God they claim does not exist. In their zeal – really a religious zeal – to eradicate all things Christian, at least from the public square (for now), they seem to be little different from the Communists of old or IS today.