As has been pointed out on these pages time and time again, it seems that those who scream the loudest about tolerance and diversity are those who are actually the least tolerant and diverse. We get this all the time from angry atheists, militant homosexual activists, and devout Muslims.

They waffle on and on about acceptance and toleration, but they seldom will extend these goods to anyone else. Examples of these are legion, and not a day goes by without more glaring cases of this coming to light. Let me offer two more such situations which have just been reported.

Here in Australia it seems that our universities are not really interested in the free flow of ideas, but instead in a stifling conformity of group-think. Consider how one university is treating a religious conservative politician, and his right to free speech:

The UNSW Student Representative Council is calling on the conservative UNSW Warrane College to cancel their annual lecture by the former Minister for Defence, Kevin Andrews MP. The event is scheduled for Wednesday October 7th and is titled, ‘The Building Blocks of Western Civilisation: Reflections on Marriage and the Family’.
It is assumed that Mr Andrews’ lecture will address opposing marriage equality and issues surrounding gender, particularly considering he has been a key figure in blocking marriage equality legislation. It is the view of President Billy Bruffey, and the SRC that this lecture will cause UNSW students to feel victimised and isolated, and that Mr Andrews’ views do not conform with those of the University or its students.
Mr Bruffey has emphasised that UNSW is a modern society which has no place for backward thinking or any form of discrimination.
“Our university has a proud history of standing against prejudice and homophobia, and it cannot ignore the damage Andrews will do to that reputation,” Mr Bruffey says.
Students will take place in a rainbow flag stunt and protest outside Warrane College at UNSW at 7pm Wednesday October 7th. 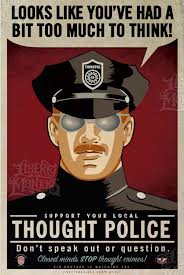 ‘Assumed’? So they don’t even know what he is going to talk about but they want him banned anyway? Wow, how thoughtful and rational. Just what we would expect on a university campus devoted to cultivating the mind and exploring ideas.

And let me translate the remarks of Bruffey for you: “We really believe in tolerance and openness here. In fact, we believe in it so much that we will not tolerate or be open to any ideas or viewpoints that do not fully agree with ours. Any differing values and beliefs will be fiercely censored and banned. After all, we have a reputation of fairness, tolerance and acceptance to defend here.”

And so much for the role of higher education: you know, to be open to exploring new ideas, to allow for vigorous debate, to let competing viewpoints be given a free hearing, and so on. Nope, today most universities are about one thing: the official PC party line.

Everyone will conform to the predetermined mindset of the school – a mindset determined by the loudest and most fascist minority groups – and no dissent will be permitted. ‘We are not here to teach you how to think, but what to think.’ Welcome to modern education in the West.

This is commonplace now, not just in Australia, but throughout the once free West. I have now documented heaps of these cases where faith, freedom and family are all under attack as our PC schools act as thought police, banning any recalcitrants from offering a differing spin from the party line.

Let me offer one more example, this time from Ireland. I have written before about how Christian Pastor James McConnell was charged with a hate crime in Northern Ireland for daring to criticise Islam: billmuehlenberg.com/2015/06/23/more-islamic-and-homosexual-sharia/

Well it seems at least one secular columnist is coming to his defence, and for free speech in general. As one article states:

A secular columnist has called for the same people who backed a secular anti-Islam speaker after she was banned from a University to support a pastor who is set to stand trial for criticising Islam. Writing in the Belfast Telegraph, Fionola Meredith criticised Warwick Students’ Union for initially banning Maryam Namazie because she might offend Muslims. A public backlash led to the ban being reversed.
But she said that Pastor James McConnell deserves the same support. He is set to stand trial on 14 December for describing Islam as ‘satanic’ during a church service. She disagrees with Pastor McConnell’s comments, but said he has “the right to hold those views – however extreme others may think them – and to state them publicly” without the threat of prosecution.
“If you believe in Maryam Namazie’s right to criticise Islam – and I do – then you believe in Jim McConnell’s right to criticise Islam. And vice versa”, she added. Meredith wrote that the concept of political correctness is not about “promoting respect for others” but is “rapidly being turned into a weapon of intolerance to silence those whose views or actions don’t chime with a liberal-fascist agenda”.
“This isn’t about protecting the vulnerable and the marginalised. It’s not about ‘duty of care’. In fact, it’s censorship masquerading as enlightenment. If in doubt, ban it: that’s the prevailing credo”, she commented.
She concluded: “Here’s the thing, if you truly believe in free speech, it’s not just about supporting the rights of people you happen to agree with – that’s called selective tolerance, and it’s the worst sort of smug hypocrisy.”
Pastor McConnell is being prosecuted under the Communications Act 2003 for his statements in a sermon which was made available online. McConnell’s lawyers have requested that the proceedings be thrown out of court because of a possible abuse of process.

It is good to see the occasional secularist showing some common sense and clear thinking on these matters. Many of them are unwilling to grant genuine freedom of speech and promote genuine religious freedom. So to find a secularist making the case for such freedom is quite pleasing indeed.

And she made the case well. If we only allow freedom of speech when we happen to agree with it, then we do not have freedom of speech at all. Yet a dark blanket of censorship and conformity has descended upon the West – and on university campuses of all places.

Now we expect nothing but rigid group-think. No independent thought will be allowed. That is just too dangerous. My home country of America is just as full of this censorship. Just last night under the cover of darkness a statue with the Ten Commandments was pulled down by the secular state.

We sure don’t want those dangerous ideas to be allowed in public. All this stands in marked contrast to the Founding Fathers who championed freedom of speech and thought. Let me close by offering three quotes of theirs on this:

“If the freedom of speech is taken away then dumb and silent we may be led, like sheep to the slaughter.” George Washington

“Whoever would overthrow the liberty of a nation must begin by subduing the freeness of speech.” Benjamin Franklin

“I believe there are more instances of the abridgment of the freedom of the people by gradual and silent encroachments of those in power than by violent and sudden usurpations.” James Madison

Or as George Orwell was to put it later on, “If liberty means anything at all, it means the right to tell people what they do not want to hear.” But don’t dare tell these universities such radical thoughts. They would likely ban all four of these men as well.

7 Replies to “Our Tolerance Censors at Work”