The mainstream media long ago abandoned any pretence to neutrality, objectivity and even-handedness. Today you can put good money on the fact that if you are a conservative, the MSM will treat you miserably. And if you are a Christian, you will get the same treatment.

But if you are a conservative and a Christian (what the MSM pejoratively refer to as someone from the ‘religious right’), then all hell will break loose. There is nothing more despised, hated, mocked and vilified by our media than Christians who happen to be conservatives.

This is plain as day to see. If you are a religious lefty, you will get a great run with the MSM. You will be prominently and frequently featured as if you were one of their own. Even the secular lefties can tolerate a religious lefty, as long as their leftism outshines their religion. 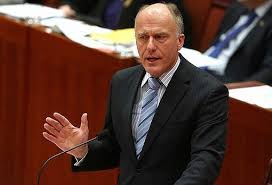 One terrific politician who is a ‘double C’ has had enough of this lousy preferential treatment, and he has had the courage to speak out on this, even though it will get him more ill treatment from the secular left MSM. I refer to Tasmanian Liberal Senator Eric Abetz.

Today’s Australian (Murdoch media) featured a story on his complaints about blatant media bias. It is worth quoting from at length:

Liberal senator Eric Abetz has unleashed an attack on the Canberra press gallery, arguing it is hostile to conservative, Christian politicians while giving favourable treatment to left-leaning or Muslim MPs. Senator Abetz said the media had treated him and his conservative colleagues, in particular former prime minister Tony Abbott, “unfairly”. He said the media felt comfortable vilifying politicians like Mr Abbott because of their Christian faith, but would never dare speak the same way about people of other religions.
“Journalists will need to explain why they do this, but it is very clear that if somebody swears their oath on the Koran, this is a wonderful expression of diversity and to be encouraged, whereas if you swear your oath on the Bible then you’re an old fart and not to be taken seriously. Well, excuse me, what’s the difference?” he said. “There is a special negative-sentiment override for those that profess the Christian faith.”
Senator Abetz referenced a description of Mr Abbott as the “mad monk” that often appeared in the media. “Just imagine making fun of somebody else’s religion of a different nature, as in if you are a Muslim, Buddhist or a Hindu,” he said. “There is the double standard that you can basically vilify anyone from the Christian side of the tracks but don’t you dare touch anyone else.”

Members of the Canberra gallery gave more positive coverage to politicians and policies they agreed with, Senator Abetz said, arguing that journalists hardly ever referred to the far Left or the extreme Left when discussing the Greens or the Labor Party, but frequently referred to him, Cory Bernardi and other conservative politicians as being from the far, extreme or religious Right. “I’ve been referred to as from the religious Right a number of times in the media and when I’ve thrown out the challenge, when are you going to report on the godless Left? The answer is never,” he said.
The ABC was one of the worst offenders, he said, providing coverage that was markedly different for the politicians it supported. “I’m terribly loyal to my new leader but you might comment on the flirtatious approach of Leigh Sales when she interviewed Turnbull. Just ask yourself the question, did Leigh Sales ever apologise for interrupting Tony Abbott?” he said. “If you’re a conservative, you’re fair game to be interrupted.”
Senator Abetz said that when ABC host Tony Jones interviewed Joe Hockey on Lateline, he interrupted him 33 times. However, when he had Wayne Swan on the previous evening, there was barely an interruption.
“Then they say Joe Hockey is unable to sell the message. Well, with 33 interruptions in one interview, one might understand why it is difficult to sell the message,” he said. Senator Abetz found the “groupthink” of political journalists had worsened since he entered federal parliament in 1994. And it was to the detriment of democracy, he said. “If you promote conservative policies, you are immediately demonised and conservative policies are demonised,” he said.
“If you have a Christian, conservative point of view to offer, the media will have this negative-sentiment override which will simply be critical of any views that you may seek to express and that has, regrettably, been the case now for many years in the media gallery.”

The piece concludes with these words:

“I think the groupthink of the media gallery has got worse as the years have gone by and the concept of a diverse range of opinions or interpretations is now lacking.”
When asked if journalists were reflecting the view of their audience, particularly when it came to issues such as gay marriage, Senator Abetz said he did not subscribe to the view that conservative Christian values were unpopular with the public. He said they were unpopular with the media, which was unrepresentative of the Australian people.
“If you go to the footy, you’re a man or woman of the people, but if you go to church, what a strange individual you are. Yet around Australia, as I understand it, a lot more people go to church on a Sunday than go to football on a Saturday.” Senator Abetz said the press gallery tended to report on issues in the same way. “The genuine diversity of reporting just does not seem to be there as one would have hoped it might,” he said.

I of course concur with every word spoken by Eric here. But the bulk of the media will be having a field day with this, seeking to tear him to shreds at every opportunity for the rest of the week. They will simply prove the very points he was making.

One simply has to see the way the MSM is fawning over secular lefty Turnbull, in marked contrast to the despicable treatment handed out to religious conservative Abbott. This in itself tells you all you need to know about our media’s leftist, anti-Christian bias.

Three cheers for speaking out Eric. Not that it will likely change anything in the Australian media. But truth is always worth sharing anyway.

16 Replies to “Abetz: Speaking the Truth about the Media”