We fully expect homosexual activists and those opposed to biblical truth to push their agendas in public. What we don’t – or shouldn’t – expect is when Christian leaders more or less do it for them. We find this happening far too often, where the arguments of the activists are repeated by those who should know better.

Consider one Australian pastor who seems to have a track record of doing this. I dealt with his rather unhelpful thinking on this topic some years ago: billmuehlenberg.com/2011/11/23/real-acceptance/

Regrettably he seems to still be at it. It was hoped that he might have gotten somewhat more biblically precise on this issue, instead of running with so much of the world’s thinking, and rehashing the homosexual objections for them. Sadly this does not appear to be the case however. 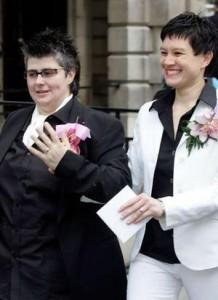 He starts off in typical secular left fashion: those who seek to stand for biblical truth on this issue are simply engaging in “vitriolic rants”. Funny how those most opposed to Christians judging other Christians end up doing that very thing so often. And he claims we are dug in a trench, and he is going to come along and declare a “ceasefire”.

He says “Christians should stop firing first!” Um, no, we did not start this battle. We did not fire the first shots. Militant homosexual activists have declared war on marriage and family and it is the height of irresponsibility to just pretend this is not happening, and claim that Christians are somehow to blame.

Every single person who claims to be a disciple of Christ has a solemn obligation to defend biblical truth and to stand against various attacks on key biblical beliefs and values. Not to do so is a sign of a lack of love for Christ and for his truth. As Martin Luther is purported to have said,

If I profess with the loudest voice and clearest exposition every portion of the truth of God except precisely that little point which the world and the devil are at that moment attacking, I am not confessing Christ, however boldly I may be professing Christ. Where the battle rages, there the loyalty of the soldier is proved, and to be steady on all the battle front besides is mere flight and disgrace if he flinches at that point.

I was alarmed to find him rehashing one of the sillier and unbiblical lines in this whole debate: “we are not called to be moral policeman”. Oh come on! I get this all the time from atheists and secular humanists – but from a Christian pastor? Why do I suspect guys like this would have gone troppo on someone like Wilberforce?

“Wilby old boy, don’t you know we are not called to be moral policemen? Don’t you know you are alienating all those poor slave traders? We can’t impose our values on them. We are just called to love them and accept them as they are. Stop turning people off to the gospel.”

And of course Wilberforce did have fellow believers telling him this very thing. And now we have folks doing it again on the issue of homosexuality. No wonder our side keeps losing with frightfully bad advice like this. When Christian leaders rehash the arguments of atheists and homosexuals, then you know we have some real problems in our churches.

Just as bad, he keeps going on about the “ideal” of heterosexual marriage, and that we live in a fallen world, so basically we can just forget about the ideal. One might as well argue that the ideal is not to murder people, or to steal or to rape, but since we are in a fallen world, we need to make room for this, perhaps even offer excuses for it.

Since when do the unchanging absolutes of God become mere advice? Once again, I expect atheists to think and talk this way, but not a believer, and certainly not a pastor. Sadly there is way too much confusion, sloppy thinking, illogic, and just plain biblically false information contained in his 12 points. But let me offer some brief replies:

Marriage is both a church issue and a state issue. And if this guy actually did a bit of research instead of just repeating the homosexual canards, he would know that the state has always viewed marriage as a vital social institution. Societies recognise and benefit heterosexual marriage because of all the benefits it gives to society.

2. So what? What does that have to do with anything? Of course many pagans do not buy our views on sexual morality. Nor do they buy our views on the gospel of Jesus Christ. Does that mean we simply abandon them because not everyone agrees with them? What sort of silly talk is this for a believer to make?

3. I suppose he will next claim we idolise the Bible, or truth, or God. We uphold marriage for the simple reason that God does, and he expects us to do the same. To defend biblical marriage has nothing to do with idolatry. To ignore the Bible and buy the lies of the activists is however idolatrous.

Whatever God highly values and promotes, we should highly value and promote. It is that simple. If this guy thinks God is wrong to have such a high view of marriage, then he needs to have a chat with God about that.

4. His discussion on single parents is also amazingly bad. He just does not seem to get it. Of course if a spouse dies or deserts, then a single parent is left with a real handful of care and responsibility. Of course they need all the help and support they can get. But we are talking here about something altogether different: the deliberate creation of children without both of their biological parents.

If through no choice of their own a person finds himself becoming a single parent, we help them as best we can. But it is apples and oranges when it comes to homosexuality. Here there is the deliberate move to deprive children of a mum or a dad.

He is so unaware – either wilfully or otherwise – about what is actually happening, that he is more than happy to push patently false statements, and attack those who do speak about what is going on here. Once again, I document all this in my books – the books he evidently refuses to even consider.

I fully document all this in my books, but this pastor prefers to ignore the evidence and simply shoot the messenger. That is a real worry. Polyamorists, paedophiles, those into bestiality and incest have all come out of the closet, using the very same arguments that the homosexuals have. That he wants to deny all this is simply shocking.

7. One of the most abused and misused words in this whole debate is “love”. Sadly this pastor does the very same hatchet job on this that the homosexual activists do. Of course we are to treat one and all with respect. That goes without saying. But biblical love never means condoning sin, coddling sinners, and allowing them to head to a lost eternity.

Biblical love is always about willing the highest good of the other person. This always means warning a lost sinner (whether a homosexual or not) of his fate if he does not repent and casts his faith on the one who died for our sins. Just what is loving about leaving someone trapped in their sin and headed for a lost eternity?

And no, one is not born a homosexual. As I document in my books, many honest homosexuals admit that real choice is involved. And he again brings genuine intersex cases (which are extremely rare) into the homosexual discussion. Again, the two have nothing in common. I dealt with this furphy in my previous article and in my books, but he sadly seems quite happy to keep deliberately repeating this falsehood.

8. “Real Christianity is accepting.” No, not at all. We must never accept sin and evil. Indeed, we must “hate that which is evil” as Paul commands us in Romans 12:9. And real Christianity is discerning and divisive – it separates between those who come to Christ in faith and repentance and those who don’t. No one reading the gospels can fail to see that Jesus constantly divided the crowds, constantly angered people, and even deliberately pushed many away.

Jesus made it very hard to be his disciple. He drove many away, including the rich young ruler. Sorry, but I will side with Jesus here, and not with trendy, secular and unbiblical notions of tolerance and acceptance which have nothing to do with biblical truth.

9. Once again, straight out of the homosexuals’ strategy manuals. Have straights done a bad job of marriage? Of course. The thing to do is to repent of this and seek to get it better. Using this as an excuse to allow more sin and evil is ludicrous in the extreme. Where do we find anywhere in the Bible the idea that since we have fallen in one area, we can just go ahead and fail in all other areas?

10. “The Bible teaches a hierarchy of ethics – that is, a higher law will cancel out a lower one.” What? Where does it say that? Chapter and verse please. Simply making things up as you go along, hoping undiscerning and biblically illiterate believers will fall for it helps no one.

11. A Christian pastor actually said this? There is no such thing as homosexual “marriage”. Not only is it an oxymoron, but it is based on something Scripture calls an abomination. How can any Christian leader even think like this? Once again, instead of standing strong on the Word of God, he seems to have thrown in the towel and put up the white flag of surrender.

He concludes his piece with some proper concerns about homosexual marriage (more or less – he is rather clueless about relying on state exemptions for example). But sorry, by now the damage has been done. Any genuine concerns he might have had at the end are all undermined by the silliness of the 12 points he just penned. Had he omitted the first 90 percent of his article, I would not mind that much about what remains.

When a precise and clear trumpet sound is needed (1 Corinthians 14:8), all we seem to get instead from some folks is confusion, capitulation, muddled morality and threadbare theology. Sorry, but with such questionable commentary as this, no wonder the church is losing so badly in this area. Please keep such folks in prayer in the hope that better, more biblical presentations of this topic will be forthcoming.

7 Replies to “How Not To Think About Homosexual Marriage”