I was rather excited when doing my daily reading – now in the end of Luke’s gospel – this morning at 4am. No I am not a real spiritual guy – jetlag does this to me with early morning risings. I am just back from a terrific pro-family conference in the US, and ready to keep fighting the good fight in Australia and beyond.

And I took great encouragement and inspiration from what I just read. Luke 24 of course tells us about Jesus rising from the dead, meeting with the disciples, and then ascending into heaven. Anyone reading the gospels for the very first time could not be untouched by the climax of the Jesus story.

Even those of us who have read the gospels a hundred times should still be mightily touched in the same way. After three years of ministry, it looked like the whole agenda of Jesus was foiled, and the good news he had been proclaiming went pear-shaped.

After such an amazing, hard core three years, it seemed like everything was lost. Indeed, the disciples were already going back to their old day jobs, thinking this must just have been a long, incredible dream. Then Jesus appears to them! Wow! 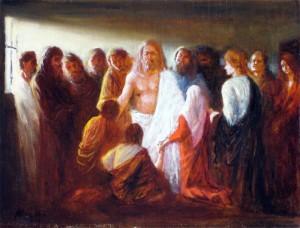 Not only is he alive, but he commissions them to continue the work that he started! That is so incredible when you think about it. God himself initiated a tremendous work on planet earth, yet entrusts this vital work to his own disciples, and those who would come after them.

But let me simply record the words of Luke here. I would love to present the entire chapter, but let me just share verses 41-52:

And while they still did not believe it because of joy and amazement, he asked them, “Do you have anything here to eat?” They gave him a piece of broiled fish, and he took it and ate it in their presence. He said to them, “This is what I told you while I was still with you: Everything must be fulfilled that is written about me in the Law of Moses, the Prophets and the Psalms.” Then he opened their minds so they could understand the Scriptures. He told them, “This is what is written: The Messiah will suffer and rise from the dead on the third day, and repentance for the forgiveness of sins will be preached in his name to all nations, beginning at Jerusalem. You are witnesses of these things. I am going to send you what my Father has promised; but stay in the city until you have been clothed with power from on high.” When he had led them out to the vicinity of Bethany, he lifted up his hands and blessed them. While he was blessing them, he left them and was taken up into heaven. Then they worshiped him and returned to Jerusalem with great joy. And they stayed continually at the temple, praising God.

‘Amazement.’ ‘Great joy.’ ‘Praising God.’ How could they have any other reaction than that? What an incredible three years it had been, with an even more incredible last week. The highest of highs were coupled with the lowest of lows. One day they were discussing amongst themselves who would be the greatest amongst them, and where they would sit in glory, and then Jesus is killed.

But then he arose! Wow, this was just a mind-boggling week. And now Jesus just gave them this word about being his witnesses, and going out with his power and anointing. More wows! ‘So this was the real deal after all, and we are going out in his name to proclaim his good news.’ Wow.

And because we have two books written by Luke on all this, we pick up the story immediately in Acts chapter 1. Let me offer the first eleven verses:

In my former book, Theophilus, I wrote about all that Jesus began to do and to teach until the day he was taken up to heaven, after giving instructions through the Holy Spirit to the apostles he had chosen. After his suffering, he presented himself to them and gave many convincing proofs that he was alive. He appeared to them over a period of forty days and spoke about the kingdom of God. On one occasion, while he was eating with them, he gave them this command: “Do not leave Jerusalem, but wait for the gift my Father promised, which you have heard me speak about. For John baptized with water, but in a few days you will be baptized with the Holy Spirit.” Then they gathered around him and asked him, “Lord, are you at this time going to restore the kingdom to Israel?” He said to them: “It is not for you to know the times or dates the Father has set by his own authority. But you will receive power when the Holy Spirit comes on you; and you will be my witnesses in Jerusalem, and in all Judea and Samaria, and to the ends of the earth.” After he said this, he was taken up before their very eyes, and a cloud hid him from their sight. They were looking intently up into the sky as he was going, when suddenly two men dressed in white stood beside them. “Men of Galilee,” they said, “why do you stand here looking into the sky? This same Jesus, who has been taken from you into heaven, will come back in the same way you have seen him go into heaven.”

Again we get some marvellous happenings which would forever have changed the disciples. If they had any doubts about Jesus before the resurrection (and many did) they certainly did not afterwards. This was more life-changing stuff which would turn them into fearless, bold witnesses for Jesus.

And notice the way Luke puts it in verse one: “In my former book, Theophilus, I wrote about all that Jesus began to do and to teach.” In his first book he described the beginning of the ministry of Jesus. And now in the book of Acts (really, the second half of Luke’s gospel) he tells us all about the ongoing continuation of that work.

But, the discerning reader will ask, ‘How can this be, since in v. 11 we are told Jesus has left the scene? How is his story continued in the 28 chapters of Acts?’ Well, that is the whole point: we, his followers, are to continue the work which Jesus started. Incredibly, what he began, we are to complete. We really are on a mission for God.

Now I realise that my title may appear to be somewhat misleading. Of course Jesus both starts and finishes things, not us. And the unique, one-off work of redemption which was accomplished at Calvary was solely his work, and no one else’s. Only his shed blood could make the salvation of lost sinners possible.

So he alone gets all the glory and he is the one who is responsible for everything good that we may do for him. But it is true nonetheless that we are co-labourers together with him. He has chosen to get the job done by using us, as incredible as that may seem.

That is the truly remarkable thing which I wish to impress upon you here. He alone is God, he alone can save lost sinners, but for some mind-boggling reason he has chosen to use finite, fallen and frail creatures like you and me to continue the work of the Kingdom.

What an amazing calling and an incredible challenge. He has called us to represent him. When people see us, they are meant to see Jesus. Whenever I contemplate that, I want to crawl into some cave and hide. Who me, represent Jesus? I fail him daily and so seldom properly show the world what he is truly like.

Yet that is the appointed means by which God will reach the world: through miserable creatures like you and me, saved by the grace of God, filled with his Spirit, and strengthened by his Word. The implications of all this should humble every single one of us indeed, and it should send us all on our faces before Almighty God.

It should cause us to ask, “Why me Lord?” And it should remind us of the words of Jesus spoken to the disciples: “So you also, when you have done everything you were told to do, should say, ‘We are unworthy servants; we have only done our duty’” (Luke 17:10).

Quite so. We have all been quite unworthy. And if that were the last word on all this, it would be quite enough. But there is another word which we must hear, another word that should floor all of us in wonder and amazement. Not only do we have the high privilege to work together with Christ for the Kingdom, but he may actually say to many of us on that great day: “Well done, good and faithful servant!” (Matthew 25:21).

More wows! Such amazing grace. Such a wonderful privilege to work with Jesus. Such awesome responsibilities. Such remarkable condescension on God’s part to choose to work with us to accomplish his purposes. Such an incredible honour to serve together with Christ.

Wow. Simply wow. What else can one say?

5 Replies to “He Started It, We Must Finish It”