You might be forgiven for thinking that I got my title wrong, and that it is of course a one-child policy. Well that certainly was official policy since 1979 in China, but just today in the press we read about a new policy: two children per couple will now be allowed.

One news article on this begins with these words: 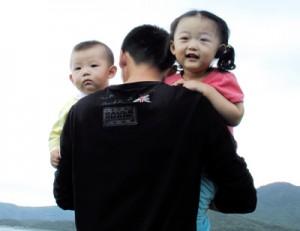 China will allow two children for every couple, the state-run Xinhua news agency reported Thursday, a move that would effectively dismantle the remnants of the country’s one-child policy that had been eased in recent years.
“To promote a balanced growth of population, China will continue to uphold the basic national policy of population control and improve its strategy on population development,” Xinhua reported, citing a communique issued by the ruling Communist Party. “China will fully implement the policy of ‘one couple, two children’ in a proactive response to the issue of an aging population.”
Xinhua said the proposal needs to be approved by China’s top legislature before it can be enacted. China, now a nation of more than 1.3 billion people, instituted a policy of one child per couple to control population growth in the 1970s.
When its propaganda didn’t work, local officials resorted to abortions, heavy fines and forced sterilization. The decision to end the restriction followed a four-day strategy meeting of senior Communist Party officials at a Beijing hotel, CNN’s David McKenzie said.
He has said the move was foreshadowed by a change in the propaganda: While old advertisements depicted parents doting on one child, he said, a recent commercial showed a boy begrudgingly sharing a toy with his younger sister.
Human rights group Amnesty International issued a statement warning that the change in policy was “not enough.”
“Couples that have two children could still be subjected to coercive and intrusive forms of contraception, and even forced abortions – which amount to torture,” China researcher William Nee said. “The state has no business regulating how many children people have,” he said.

Yes, the state has no right to determine how many children a couple should have. Whether a state “allows” one child, or two, or three, or three hundred, is an indication of Big Brother totalitarianism. While eugenicists may applaud such restrictions, no pro-natalist would. Indeed, the right to form a family and have as many children as a couple chooses is basic to any free society.

So while millions of couples will be glad about this loosening of government policy, this is still statist tyranny and the antithesis of liberty. Twenty years ago I penned a piece on the gross human rights violations in China, and its cruel one-child policy. In it I said this:

Indeed, many have long known of China’s poor track record concerning human rights. While people like Ross Terrill were lauding Mao and the Cultural Revolution, others, like Steven Mosher were chronicling the real conditions in Communist China, as in his 1983 study, Broken Earth. More recently Mosher has written another book, A Mother’s Ordeal, describing China’s one-child policy. This policy has resulted in tremendous suffering, especially for women. Not only is infanticide routinely practised, mainly against female babies, but as abortion became compulsory for any couple who already had one child, the practice emerged of couples killing an older daughter when they discovered they had a male child in the womb.
These practices have taken their toll. Whereas a normal population produces 105.5 baby girls for every 100 baby boys, the ratio in China is now 118.5 boys to every 100 girls. That means 1.7 million girls go missing every year.

Population expert Steven Mosher, mentioned just above, is one authority on these matters whom I have often cited, and have heard speak various times over the years, including right now at the World Congress of Families conference in Utah.

He has just offered some commentary on this changed policy, and is worth hearing from at length:

“The regime is backing away from draconian birth limits,” says Steven Mosher, President of the Population Research Institute, “not because senior Party officials have suddenly developed a conscience. Rather, it will be because they have finally realized that a shrinking workforce and a rapidly aging population are crippling future economic growth.”
For at least the past two years, China’s workforce has been shrinking. Last year, the potential workforce fell by 3.71 million, a significant number even by China’s standards. At the same time, the over-sixty population is exploding. According to U.N. projections, it is expected to more than double by 2050. China is growing old before it grows rich, and the strains on China’s nascent pension programs will be enormous.
Mosher says, “Beijing now realizes that it must stop restricting childbirth and start encouraging it as soon as possible. Yet it can’t simply abandon the policy altogether and admit it made a mistake. That would call the regime’s legitimacy into question.”
The parallels between China’s current demographic and economic malaise and Japan’s demographic and economic decline in the 1990s is striking. The Japanese economy has never really recovered from its “demographic recession.” China may not recover either.
The One Child Policy has caused fertility rates to plummet over the past three and half decades. Sex-selective abortion has reached epidemic proportions in many parts of the country. The strong preference for sons in Chinese culture, especially in rural areas, has resulted in the deaths of millions of unborn baby girls.
The overall loss of human life in China is staggering. China’s own Ministry of Health estimated in 2013 that 336 million babies had been aborted as a result of the onerous population control program. With an estimated 13 million abortions taking place in China every year-almost 1,500 lives per hour-the number is likely significantly higher today.
Chinese President Xi Jinping first sought to loosen the policy in 2013. It was announced that couples where both the husband and the wife were themselves only children would be allowed to have a second child following the birth of their first. The response was underwhelming as few couples applied for a second birth “permit.”
Mosher says, “Now couples are allowed to have a second child. But don’t expect it to stop there. A government bent on controlling the fertility of its people will do whatever necessary to produce the number of children it thinks necessary.”

Jonathan Abbamonte, who wrote this article, offers this concluding remark:

After all, the One Child Policy is only one phase of the larger Planned Birth campaign. This is Beijing’s ongoing campaign to control the reproduction of the Chinese people under a state plan in the same way that it controls the number of tanks, or the number of coal-fired power plants, that it builds each year.
This means that, if the Chinese people refuse to conceive and bear the number of children that the state demands, childbearing will become mandatory. Women will be forcibly inseminated, regular pelvic examinations will be instituted to monitor their pregnancies, and abortions will be forbidden.
Unless and until the Communist regime abandons its Planned Birth policy, and allows couples to freely choose the number and spacing of their children, abuses will continue.
And since when has a one-party dictatorship ever voluntarily relinquished even a portion of the power that it wields over its people?

Yes of course. As mentioned, millions of couples will be relieved to be able to have two children. But as long as the state is in the business of deciding the numbers of children allowed, this is still the stuff of dystopian novels.