Is God male or female? This question is often asked in recent times, and it is especially raised by feminists – both religious and secular. However the question had actually been discussed early on in Christian history. But it is in the past century that the issue has certainly taken on renewed interest.

A few days ago another example of this occurred, with a female church leader saying we must stop talking about God as a “he”. As one article reports:

God should not necessarily be seen as a masculine figure, according to the UK’s first female bishop to sit in the House of Lords on Monday. “God is not to be seen as male. God is God,” said Rachel Treweek, bishop of Gloucester, who is to be inaugurated in parliament.
While acknowledging that many Anglicans would profoundly disagree, Treweek said the Church of England should use both male and female pronouns when referring to God. She personally prefers to say neither “he” nor “she”, but “God”. “Sometimes I lapse, but I try not to,” the bishop told the Observer.
“In the creation narratives, we’re told that God created human beings in God’s likeness, and then it goes on to talk about male and female. If I am made in the image of God, then God is not to be seen as male. God is God.”
Some want to use only the feminine gender throughout liturgy and prayers, “and some people have seen that as threatening”. Treweek added: “I am not in the business of wanting to offend anyone, but I do want to gently challenge people.” Language, she said, was “very powerful in shaping people’s views and shaping our culture”.
Treweek will be introduced as one of parliament’s 26 Lords Spiritual by the archbishop of Canterbury, Justin Welby, and the bishop of London, Richard Chartres, after her “writ of summons” is read aloud. 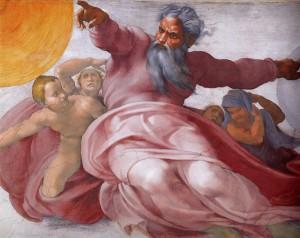 So how are we to think about this matter? First, it can be said that Treweek is certainly not the most radical voice on this, with far more extreme views put forward over the years by others. And she is partially right, at least to an extent. However we must go to Scripture to properly deal with this issue.

The short answer is that God is not gendered, nor a sexual being. God is a spirit, as we are told by Jesus himself in John 4:24: “God is spirit, and his worshipers must worship in the Spirit and in truth.” Divine beings are not male nor female. But, God is also a personal being. God is not a human being, but is nonetheless personal.

However, that is not the end of the matter. How has God chosen to reveal himself to us? That is the critical issue here. And simply put, overwhelmingly in the self-revelation of God we find him being revealed in masculine terms with masculine names and with masculine imagery.

The fact is, the names for God as found in both the Old and the New Testaments are all masculine in gender. Significantly, God is never addressed as Mother in Scripture. A constant theme is the fatherhood of God, and – in the NT – the sonship of Christ.

In addition to all the passages referring to God’s various roles or activities in male terminology (king, warrior, groom, prince, priest, etc), there are plenty of passages that clearly refer to him as a father. The following is just a very small sampling:

-Deuteronomy 32:6 Is this the way you repay the LORD,
you foolish and unwise people?
Is he not your Father, your Creator,
who made you and formed you?
-Jeremiah 3:4 Have you not just called to me:
‘My Father, my friend from my youth.’
-Psalm 89:26 He will call out to me, ‘You are my Father,
my God, the Rock my Savior.’
-Psalm 103:13 As a father has compassion on his children,
so the Lord has compassion on those who fear him.
-Matthew 6:9 This, then, is how you should pray: “Our Father in heaven, hallowed be your name.”
-Matthew 23:9 And do not call anyone on earth “father,” for you have one Father, and he is in heaven.
-Matthew 28:19 Therefore go and make disciples of all nations, baptizing them in the name of the Father and of the Son and of the Holy Spirit
-1 Corinthians 8:6 For us there is one God, the Father, from whom are all things and for whom we exist.

All up we have hundreds of times in the Bible where God is mentioned with masculine names and with masculine pronouns. That is how God chose to reveal himself to us, and we should take this seriously. But it is also true that we sometimes have feminine imagery used in the Bible to describe God. For example:

-Isaiah 42:14 “I cry out like a travailing woman
-Isaiah 66:12-13 For this is what the LORD says:
“I will extend peace to her like a river,
and the wealth of nations like a flooding stream;
you will nurse and be carried on her arm
and dandled on her knees.
As a mother comforts her child,
so will I comfort you;
and you will be comforted over Jerusalem.”
-Hosea 11:1-4 “When Israel was a child, I loved him,
and out of Egypt I called my son.
But the more they were called,
the more they went away from me.
They sacrificed to the Baals
and they burned incense to images.
It was I who taught Ephraim to walk,
taking them by the arms;
but they did not realize
it was I who healed them.
I led them with cords of human kindness,
with ties of love.
To them I was like one who lifts
a little child to the cheek,
and I bent down to feed them.
-Matthew 23:37 Jerusalem, Jerusalem, you who kill the prophets and stone those sent to you, how often I have longed to gather your children together, as a hen gathers her chicks under her wings, and you were not willing.

So God can be seen as having feminine characteristics at times, but overwhelmingly the masculine presentation is given us. As I said, God as such is genderless, but when he wants to convey real information about who he is, the masculine is the predominant theme.

Critics might argue that this is just a reflection of the patriarchal culture in which Scripture was written. While a major discussion on the nature of Scripture cannot here be entered into, our doctrine of inspiration is that the Bible has divine and human authors.

But the truths that God has wanted to convey come forth in the totality of Scripture, and that includes all the masculine imagery and names of God. The emphasis on these descriptions and titles for God are part of what God chose to reveal to us, and are not just some artificial cultural construct.

While God is never described with sexual characteristics in the Bible, he is consistently described in the masculine gender, both by himself and by others. We must defer to God’s chosen self-revelation, and resist the temptation to follow instead modern secular trends and agendas.

Obviously much more could be said on all this, but let me wrap things up. Systematic Theology professor Simon Chan of Trinity Theological College in Singapore finishes his article on this topic as follows:

Avoiding the use of personal pronouns for God unwittingly downplays God’s personal nature. This might not seem like a major concession in the West, where a “Christian” discourse is still assumed. When God is mentioned, people generally assume that it’s the Christian God. But in Asia, where there are “gods many, and lords many” (1 Cor. 8:5, KJV), and where the ultimate reality may not be personal at all, we need to speak of God in personal terms. Not to do so, for fear of offending weak consciences, is simply disastrous.
Christians have good reasons to insist on addressing God as Father, especially in the liturgy, where the Christian story is reenacted. Father is not a culturally conditioned term but the proper name of God given by divine revelation. It is how God is primarily identified or named in relation to his Son. At stake is the Trinitarian identity, which inevitably affects the church’s identity. Playing the inclusive language game has a high theological cost that far outweighs any gains.

Let me finish with some remarks by C. S. Lewis. In 1948 he wrote an essay entitled “Priestesses in the Church?” which can be found in God in the Dock. While my article is not discussing that particular subject, what he said is worth thinking about:

Christians think that God Himself has taught us how to speak of Him. To say that it does not matter is to say either that all the masculine imagery is not inspired, is merely human in origin, or else that, though inspired, it is quite arbitrary and unessential. And this is surely intolerable: or, if tolerable, it is an argument not in favour of Christian priestesses but against Christianity.

15 Replies to “God and Gender”