I am angry – really angry. Angry at the Islamic terror attacks in Paris? Yes, of course. But I am also absolutely outraged at the lamestream media and its despicable coverage of this tragic affair. I spent most of Sunday having the great misfortune of listening to the Australian MSM on the attacks. 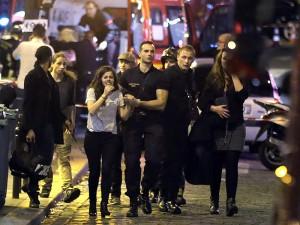 Even 8-10 hours after the attacks there were still mindless wonders assuring us we cannot be sure who did this. Obama also said that he would ‘not speculate on who was responsible’. And how often did I hear nonsense like ‘We must not stigmatise Muslims’.

How many pointed the finger at the West? How many of these ‘experts’ managed to say that France and the West had brought this upon themselves. And right on cue, the dhimmi commentariat were mentioning the Crusades! Yep, 400 casualties in Paris are all OUR fault! Of course.

And the chattering classes were especially loathe to see any Islamic conspiracy here. Amazing how eight lone wolves could coincidentally do so much damage at the same time, and without any ideological basis for it. Likely disgruntled Sunday school teachers. And it is probably all Tony Abbott’s fault anyway.

After a while the lamestream media could no longer deny that this was terrorism. But not one commentator had the guts to tell us the truth: this is ISLAMIC terrorism. Not Baptist terrorism. Not Confucian terrorism. There is a political ideology behind all this. Until we identify who and what we are up against, we will keep losing, and more innocent men, women and children will horrifically die.

I actually saw one loon claim that the attacks were caused by capitalism! Cluelessness abounds. Just two days ago the American Dhimmi-in-Chief assured the American people that “ISIS has been contained” and that “ISIS is not gaining strength”. Yeah right, try telling that to the French.

And clueless critics are already saying I and other realists are fear mongering. Umm, stampeding Muslims massacring infidels do a pretty good job of instilling fear I would have thought. No need to shoot the messenger. Telling truth is always crucial, especially when you are under attack.

However a few brave souls here in Australia did get it right. Miranda Devine spoke some much needed truth here:

Beautiful Paris has been attacked by Islamist terrorists again. There’s no point pretending there’s any doubt about who the perpetrators are. Not a “lone wolf” gunman, not “disaffected youth” or “un-Islamic” madmen.
Less than a year after the Charlie Hebdo massacre, the land of “liberte, egalite and fraternite” has been attacked at its heart, yet again, by Islamist fundamentalists driven by a murderous totalitarian ideology that cannot be appeased.
Co-ordinated, militaristic attacks by suicide bombers and gunmen on soft targets at six locations across Paris are designed to cause maximum casualties and maximum terror.
Survivors say terrorists wielding Kalashnikovs yelled “Allahu Akbar”, as they opened fire on young people watching a rock concert at the Le Bataclan theatre, scene of a dramatic police operation to rescue hostages from the carnage where 100 people were reported dead.

And Andrew Bolt wasted no words on this:

Spare me the empty talk of politicians talking of their “shock” and “resolve” over the Paris massacre. Spare me the weasel words of our new Prime Minister, Malcolm Turnbull, who yesterday could not bring himself to even whisper the word “Islam”.
But, no, here we go again with the same evasions, this time after more than 120 Parisians were slaughtered by Islamists for not being Muslim enough. “This is an attack … on all humanity,” declared Turnbull from Berlin. Er, no, it wasn’t. This was an utterly inevitable attack by Islamists on the French — indeed the West — for not submitting to their brand of faith.

Or as Brendan O’Neil from the UK put it:

Less than 24 hours after the barbarism in Paris, the bodies of more than 120 concertgoers, Friday-night revellers and children barely cold, and the apologism has already begun. They couldn’t even wait a whole day, these cultural appeasers, whose kneejerk response to every act of terrorism is to ask what we the wicked West did to deserve it, or to argue that we the wicked West will make things worse with our response to it. The simple fact of our existence makes us ripe for murderous assault, apparently; and the folly of responding to such assaults with either police activity at home or military activity abroad makes us riper still for attack. We’re damned if we stay still, damned if we take action. Our citizens must die because our nations are nasty.

Indeed, former Prime Minister Tony Abbott had been warning Europeans just days ago about not allowing porous borders and open slather immigration policy. He was of course one hundred percent right, yet our current PM Malcolm Turnbull actually attacked Abbott for his sensible and proper remarks.

Many have warned that IS terrorists are quite happy to implant themselves in with the masses of migrating refugees in Europe, and that seems to be a successful strategy indeed. Some news reports already have mentioned that some of the dead jihadists had Syrian passports. Said one news item:

One of the terrorists responsible for the slaughter of 129 people in the Paris attacks held a passport used to enter Europe from Syria, officials have claimed. The shocking development suggests the killer may have been posing as a refugee before travelling across the continent to carry out the atrocity.
Officials have also revealed a second man who carried out the mass murder was likely to have passed through to the continent in a similar way. A Greek government official revealed the first terrorist, who died in the series of attacks on the French capital, held the document of a man who had passed into the southern European country, probably by refugee boat, last month.

Much more sensible commentary is starting to emerge on these horrific attacks, so let me quote from a few of them. David French offers some advice on the way forward:

Francois Hollande is pledging to wage “pitiless” war. Good. Now let’s see if France backs up its words with actions. While France is often the butt of jokes about its military prowess, it not only has a centuries-old tradition of military valor, it breeds warriors still. May they be unleashed.
Fourth, if European leaders (and the Obama administration) retain a shred of sanity, they’ll rethink their approach to the migrant crisis and start to close their borders, quickly. There are almost certainly more terrorists who have recently arrived in European capitals, awaiting only weapons, organization, and an opportunity to launch the next attack.

And as usual some of the best commentary on this comes from Mark Steyn. His article “The Barbarians Are Inside, And There Are No Gates” is spot on. let me offer some of his insight and wisdom here:

As I write, Paris is under curfew for the first time since the German occupation, and the death toll from the multiple attacks stands at 158, the vast majority of them slaughtered during a concert at the Bataclan theatre, a delightful bit of 19th century Chinoiserie on the boulevard Voltaire. The last time I was there, if memory serves, was to see Julie Pietri. I’m so bloody sick of these savages shooting and bombing and killing and blowing up everything I like – whether it’s the town where my little girl’s favorite fondue restaurant is or my favorite hotel in Amman or the brave freespeecher who hosted me in Copenhagen …or a music hall where I liked to go to hear a little jazz and pop and get away from the cares of the world for a couple of hours. But look at the photographs from Paris: there’s nowhere to get away from it; the barbarians who yell “Allahu Akbar!” are there waiting for you …when you go to a soccer match, you go to a concert, you go for a drink on a Friday night. They’re there on the train… at the magazine office… in the Kosher supermarket… at the museum in Brussels… outside the barracks in Woolwich…
When the Allahu Akbar boys opened fire, Paris was talking about the climate-change conference due to start later this month, when the world’s leaders will fly in to “solve” a “problem” that doesn’t exist rather than to address the one that does. But don’t worry: we already have a hashtag (#PrayForParis) and doubtless there’ll be another candlelight vigil of weepy tilty-headed wankers. Because as long as we all advertise how sad and sorrowful we are, who needs to do anything?…
Visiting the Bataclan, M Hollande declared that “nous allons mener le combat, il sera impitoyable”: We are going to wage a war that will be pitiless. Does he mean it? Or is he just killing time until Obama and Cameron and Merkel and Justin Trudeau and Malcolm Turnbull fly in and they can all get back to talking about sea levels in the Maldives in the 22nd century? By which time France and Germany and Belgium and Austria and the Netherlands will have been long washed away….
I’m Islamed out. I’m tired of Islam 24/7, at Colorado colleges, Marseilles synagogues, Sydney coffee shops, day after day after day. The west cannot win this thing with a schizophrenic strategy of targeting things and people but not targeting the ideology, of intervening ineffectually overseas and not intervening at all when it comes to the remorseless Islamization and self-segregation of large segments of their own countries.

Yeah, I’m getting pretty sick and tired of all this as well. But as long as we have dhimmi dunces for our leaders, and the media filled with clueless wonders, we can expect a whole lot more of this.

23 Replies to “Clear Thinking on Paris and Islam”