Not just Paris, but much of France is now in lockdown, and even places like neighbouring Belgium. Travel has been curtailed, borders closed, and panic reigns on the streets of Paris and beyond. A series of coordinated attacks around the city in at least six locations have once again highlighted the very real war we are in.

With hostage taking, Kalashnikov and grenade attacks across the nation’s capital, and shouts of Allahu akbar, we are seeing familiar scenes being played out yet again. It seems the West has learned absolutely nothing from previous attacks also undertaken by the religion of peace. 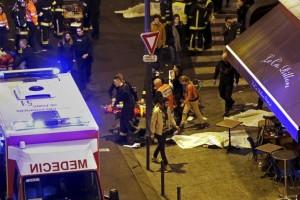 Another series of terrorist attacks, another set on incredulity on the part of the West, and another case of denial by our elites and media. Even with IS already claiming responsibility for the Paris attacks which have left at least 160 dead as of now, we have talking heads still saying we can’t say who is behind this.

Indeed, the US dhimmi-in-chief Obama said ‘I don’t want to speculate on who is responsible for this’. Of course. He will not use the ‘M’ word and he will prefer that we all just keep our heads in the sand. Leaders like this prefer to live in la la land and hate to deal with reality.

This bugs me no end. As horrible as these attacks are, equally appalling is the ongoing wilful blindness of Western leaders, politicians and media outlets to deal with reality. I have yet to hear the ‘M’ word or the ‘I’ word mentioned in any of the media reports. Obviously we have another case of disgruntled Baptist Sunday school teachers going on a rampage.

While many of us have been warning folk for years about flawed multiculturalism policies, ignorance of Islam, and blindness to the reality of creeping sharia, we still get our ruling elites pushing for open slather in immigration policy, and still remaining utterly clueless as to the war we are in.

Europe is learning this the hard way once again. And after years of non-integration and non-assimilation, all this was of course inevitable. When will we realise a very simple yet profound truth: Immigration without assimilation is an invasion.

Let me repeat that for you until it begins to sink in: Immigration without assimilation is an invasion. For decades now Western nations have taken an almost blind and unquestioning approach to Islamic immigration, asking few if any questions about those coming to our countries.

Hollande in France, Merkel in Germany, etc, have all been insistent and proud about their open door immigration policies, willingly bringing in masses of people – many of whom should never have been let in. Admittedly, separating the wheat from the chaff here can be a very difficult task, but it is a task all responsible governments must undertake.

Genuine multiculturalism works when the guest comes to a host nation agreeing with and appreciating its values, beliefs and way of life. That is how real integration and assimilation occurs. But when new arrivals refuse to embrace the values of the nation, and even refuse to learn the language, then you have a recipe for disaster.

And here is another home truth you can bank on: when someone says they plan to kill you, you had better stand up and take notice. When the enemies of freedom, democracy and the rule of law come out clearly stating their aims to annihilate the West and kill the infidels, then the first thing we must do is take them seriously.

Everything I said above is of course generic and general truth which anyone can assent to. But I also happen to be a Christian, as well as someone who is very aware of and concerned about the nature and goals of Islam. So how should the believer respond to all this?

As I just told a group of international students yesterday on this topic, we have two things going on here. As individual believers, we can and should seek to befriend, reach out to, and share the gospel with, our Muslim neighbours. We have an obligation to love and evangelise everyone, including Muslims.

But as to public policy, all governments have an obligation and responsibility to protect its citizens, resist those who hate us, and secure our borders. No government worth its salt can turn a blind eye to the political ideology of Islam and its stated aims of establishing a universal caliphate with everyone in submission to Allah, willingly or otherwise.

God created the institution of the state to deal with evil and maintain order in a nation. But he also created the church to share the gospel. The believer must understand that both play important roles here. While individual believers can forgive and extend mercy, the state must administer justice and punish wrongdoing.

Thus there is nothing at all contradictory in having believers praying for and seeking to win Muslims, while simultaneously affirming and supporting the role of the state to guard its citizens and deal – harshly if need be – with its enemies. Islamic terrorism is a reality which we dare not ignore, make excuses for, or try to spiritualise away.

Indeed, can I suggest that Christians who are utterly clueless as to the real nature of Islam and its aims are a part of the problem. There is nothing spiritual or Christlike about being ignorant and just plain stupid about one of the gravest threats to everything we hold near and dear.

Allowing Muslim terrorists to slaughter innocent men, women and children because we don’t want to be “judgmental” or appear to be unwelcoming or un-accepting is not a sign of Christian maturity but a sign of brainless foolishness. As already stated, we must pray for and evangelise everyone, including Muslims, but we must start developing some political realism here as well.

Militant Islam is indeed a “death cult” as some brave leaders have said, such as Tony Abbott. We ignore it at our own peril. This is war. War has been declared against the West, against Christianity, against freedom, and against everything decent and worthwhile.

To pretend Islam is not a problem is to simply contribute to the problem. Indeed, the appeasers, the cowards, and the duped dhimmis in the West are as responsible for the blood flowing on the streets of Paris – and elsewhere – as are the IS gunmen.

We have allowed this to happen. It is time that we change course, wake up to reality, and admit that war has been declared on us.