Devout Muslims who take their faith seriously have been at work again – this time slaughtering 14 innocent infidels in California, and injuring 21 others. The diabolical killing spree was thankfully put to an end when two of the Islamic terrorists were eventually shot dead by the police.

All this is of course front page news again. Another day, another Islamic terror attack. We almost yawn when we see this being played out once again. And as usual we have the lies, the spin, the deception, and the taqiyya being thrown at us. 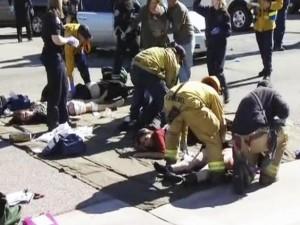 As usual Obama and the media are doing everything they can to exonerate Islam and put the blame somewhere else: a “gun culture,” Islamophobia, another “workplace incident” and so on. Indeed, our pro-Islam and anti-Christian POTUS is still waffling on about not knowing the motives, and that it still might be just some workplace problem.

But as Doug Giles put it, “If white conservative Christians massacred 14 in San Bernardino the media & Obama would tell you immediately.” Indeed, the secular left apologists for Islam immediately condemned the recent Colorado shooter near a Planned Parenthood mill as a Christian pro-lifer when he was of course nothing of the sort.

T.J. Sweetin put it this way: “A non-Christian, white, schizophrenic, American male shoots up a PP. He is labeled a hateful Christian and his religion is to blame. Syed Farook and Tashfeen Malik murder 14 innocent civilians in cold blood. Media recommends that the American people ‘not to jump to conclusions’.”

Indeed, this is now as predictable as it is reprehensible. Christians are always blamed for everything instantly, but our elites can never open their mouths and utter the “I” word or the “M” word. You know the murderous political ideological has won already when its intended victims do everything they can to defend their killers.

Fools who claim that this was just some offense taken by a Muslim at a Christmas party – yes, there are fools who have tried to argue this – are simply aiding and abetting the enemy. This was no spur of the moment offense taken resulting in mass murder. This was a fully planned and fully prepared for terror attack. As one news report mentions:

According to authorities:
The couple had high-powered weapons, some could pierce body armor;
There were thousands of rounds found in the couple’s home for their weapons, including 2,500 .223-caliber rounds;
There were three pipe bombs found and detonated in the building where the shooting occurred;
There were ‘thousands’ of tools in the home that could be used to make additional bombs;
The couple wore GoPro cameras and body armor, and had extra ammunition stuffed into clothing
A search of their home turned up 12 pipe bombs and explosives attached to remote controlled cars;
The black SUV where the couple died had been rented some days earlier.

Yeah right, just a quick reaction to not really liking some Christmas carols being sung. This was a premeditated terror attack done by Muslims who hate the West and hate Christianity. Islam is a death cult, and devout Muslims kill people. And let me tell you what else is responsible for terrorism and murder: political correctness.

You may have seen this shocking report: a neighbour knew something was amiss, but dared not speak out for fear of being labelled a racist. Yes you heard me right: “According to a local Los Angeles news report, a neighbour of San Bernardino massacre suspects Syed Rizwan Farook and Tashfeen Malik didn’t report suspicious activity at their apartment for fear of being accused of racism.”

This was nothing other than yet another Islamic terror attack. The evidence is overwhelming, and as former NYC Mayor Rudy Giuliani said, if you can’t come to that conclusion you’re a “moron”: “The question here is not, is it an act of terror? We’re beyond that. When you’ve got two assault weapons, two handguns, you’re in body armour, you got a home that’s booby-trapped. You’ve been practicing to do this. Sure, it may have been motivated by some argument in a party, but this is a premeditated act of terror.”

And spare me this crap about “alienated Muslims”. Syed and his wife were living the good life in America, enjoying all the benefits of American generosity: “San Bernardino shooting suspect traveled to Saudi Arabia, was married, appeared to be living ‘American Dream,’ co-workers say”.

Other reports said he was enjoying lavish taxpayer handouts and was even allowed to regularly take time off work to pray. He also had a nice trip (with full pay) to Saudi Arabia earlier in the year, where he obviously learned more about the religion of peace. So spare us the Islamophobia nonsense. He had it made.

And of course the God-haters wasted no time in all this as well. While leaders and others were offering prayers for the victims and their families, the demonic editors at the New York Daily News thought it would be neat to have the entire front cover splattered with these words: ‘God Isn’t Fixing This’.

The lefty misotheists there used this tragedy as yet another attempt to ram failed gun control policies down American throats, while happily using the opportunity to mock God and offend millions of Christians. This is what we expect from the secular left: unrelenting contempt for God and contempt for Christians.

The simple truth is, 95 million American gun owners killed no one yesterday, but two or three devout Muslims did. This is not an issue of gun control; it is an issue of Islam control. It is the political ideology of Islam which has resulted in 27,375 terror attacks since 9/11.

There is something fundamentally wrong with Islam itself. That is the problem. Not Americans exercising their Second Amendment rights. But of course leftist tools like Obama will avoid the “I” word like the plague while putting all the blame in all the wrong places.

The typical idiotic line from our POTUS and the lefties is that we can never blame Islam when an Islamic terrorist attack takes place, but we should always blame every single gun owner whenever any shooting takes place, anywhere. Yes, this is the leftist narrative routinely regurgitated every time something like this happens.

I will say it again: Islam is the problem. This is an ideology which commands death to the infidel and rewards those who die doing so with plenty of virgins in paradise. This is why 14 people were killed yesterday, including a father of six and a messianic Jew.

This is why everyday innocent men, women and children are slaughtered, tortured and enslaved. This is all part and parcel of an archaic, bloody and fascist religion which has no place in modern Western society. And the sooner we stop lying to ourselves about the nature of our enemy, the sooner we can start saving lives.

Syed’s father spilled the beans as to why all this happened: “He was very religious. He would go to work, come back, go to pray, come back. He’s Muslim.” Not every Muslim is a terrorist. But Islam is a terrorist political ideology. We will not stop Islamic terrorism until we get real about the nature of Islam.