Plenty of people are now asking, ‘Whither Europe?’ It has been in serious trouble for decades now, and with the twin problems of Christianity in decline and Islam in the ascendency, the situation continues to further deteriorate. Mistaken policies of multiculturalism and immigration, along with a complete blindness to the threat of expansionist Islam, are killing the continent.

In a recent article political analyst Judith Bergman asks this question, “Is Europe Giving Up?” She concludes her article this way: “Europe seems to have learned nothing from the past decades. Its problems with immigrant Muslim populations continue to deteriorate. Accommodation has not solved these problems; more accommodation will undoubtedly not solve them either. More accommodation will make them, if anything, worse.” 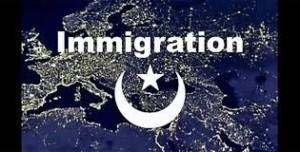 Things certainly are getting worse. The rape culture in Europe which has exploded following decades of mainly Muslim immigration is getting worse by the day, as Cologne and other cities recently demonstrated. While women are being raped and Europe is being ravaged, we still have clueless lefties demanding more foreigners be allowed in.

And sadly some of these “come on in” lefties have become the victims of all this. Consider the tragic case of Elin Krantz. As one write-up states:

Elin Krantz, once a beautiful blond woman, young and full of life, is now dead in the ground and six months decomposed. Supposedly, she was a member of the “We Like Diversity” Facebook page, called herself “multicultural” and a supporter of Third-world immigration into Sweden, the country of her birth. Maybe in those last few moments of life, she changed her mind about a few things, as if it made any difference. On that day, Elin and her African immigrant killer were riding the same tram to the Hisingen neighbourhood in Sweden.
Shortly thereafter Krantz was found raped and murdered in a wooded area not far from the tram stop. Her 23-year-old African “refugee” (who supposedly once lived in the US) killer was arrested shortly after the killing. He was charged with murder and aggravated rape. According to the prosecutors, the attack was one of “extreme ruthlessness”.

Indeed, things are getting so bad that some places now have a huge imbalance of males to females. Consider the shocking case of Sweden:

In Sweden, unaccompanied male minors made up 21 per cent of all new arrivals from the Middle-East and Africa last year. Among that number there was only one girl for every 11.3 boys, according to figures from the American website Politico. The figures also showed that from 18,615 refugees who entered Sweden last year, only 2,555 were girls.
Adding those numbers to those of Swedish nationals from the same age group, the total number of boys in the country comes to 121,914 compared to only 99,079 girls. That disparity is greater than China’s, a country renowned for its male-heavy population, where there are 117 boys for every 100 girls. Sweden, together with Germany and Denmark, has been one of the most generous European countries when it comes to hosting refugees. But Swedes’ tolerance towards the new arrivals is ebbing.
The country’s leftwing government has moved to impose border controls after opinion polls revealed the opposition party, the extreme-right wing Sweden Democrats, now enjoys a 20 per cent support from the public. In 2015 more than a million refugees arrived in Europe, mostly from Syria, Africa and South Asia.

All of this is simply unsustainable, and Europe may well be on its last legs. Some are already saying that civil war may be the way things pan out in Europe. Theodore Shoebat says “There Is Going to Be a Civil War In Europe Between Muslims and Non-Muslims”. He continues:

A German official named Hansjoerg Mueller, of the Alternative for Germany party, said that because of Merkel’s open door policy allowing the floods of Muslim immigrants the country is ‘sliding towards anarchy’ and risks becoming a ‘banana republic without any government’. He also said that it will push the nation to civil war. The official said: “Germany now is somewhere at the edge of anarchy and sliding towards civil war, or to become a banana republic without any government.”

Another recent piece on all this is worth quoting from at length. What Ross Douthat says about Germany – it is “on the brink” – could be said of much of Europe as well:

The underlying controversy here is not a new one. For decades conservatives on both sides of the Atlantic have warned that Europe’s generous immigration policies, often pursued in defiance of ordinary Europeans’ wishes, threaten to destabilize the continent. The conservatives have made important points about the difficulty of assimilation, the threat of radicalization, and the likelihood of Paris-style and Cologne-style violence in European cities.
But they have also trafficked in more apocalyptic predictions — fears of a “Eurabia,” of mass Islamification — that were somewhat harder to credit. Until recently, Europe’s assimilation challenge looked unpleasant but not insurmountable, and the likelihood of Yugoslavian-style balkanization relatively remote.
With the current migration, though, we’re in uncharted territory. The issue isn’t just that immigrants are arriving in the hundreds of thousands rather than the tens of thousands. It’s that a huge proportion of them are teenage and twentysomething men.

He concludes his piece with these words:

In the German case the important number here isn’t the country’s total population, currently 82 million. It’s the twentysomething population, which was less than 10 million in 2013 (and of course already included many immigrants). In that cohort and every cohort afterward, the current influx could have a transformative effect.
How transformative depends on whether these men eventually find a way to bring brides and families to Europe as well. In terms of immediate civil peace, family formation or unification offers promise, since men with wives and children are less likely to grope revelers or graffiti synagogues or seek the solidarity of radicalism.
But it could also double or treble this migration’s demographic impact, pushing Germany toward a possible future in which half the under-40 population would consist of Middle Eastern and North African immigrants and their children.
If you believe that an aging, secularized, heretofore-mostly-homogeneous society is likely to peacefully absorb a migration of that size and scale of cultural difference, then you have a bright future as a spokesman for the current German government.
You’re also a fool. Such a transformation promises increasing polarization among natives and new arrivals alike. It threatens not just a spike in terrorism but a rebirth of 1930s-style political violence. The still-imaginary France Michel Houellebecq conjured up in his novel “Submission,” in which nativists and Islamists brawl in the streets, would have a very good chance of being realized in the German future.
This need not happen. But prudence requires doing everything possible to prevent it. That means closing Germany’s borders to new arrivals for the time being. It means beginning an orderly deportation process for able-bodied young men. It means giving up the fond illusion that Germany’s past sins can be absolved with a reckless humanitarianism in the present.
It means that Angela Merkel must go — so that her country, and the continent it bestrides, can avoid paying too high a price for her high-minded folly.

Let me finish with the words of Baron Bodissey who discusses “The Larger Motive Behind the Groping Jihad”:

The wave of “refugees” entering Europe in 2015 was an instance of the Islamic hijra, or migration, into infidel lands. It is one of the principal phases of jihad. In their migration Muslims are following the example of Mohammed, who made hijra to Medina and forcibly established Islam there. When the number of Muslims in the new land increases sufficiently — by further migration, or by da’wa, proselytizing to convert infidels — then violent jihad can be launched, and the final conversion of the new territory will be complete.
Europe is experiencing the earliest stages of a major hijra operation. The behavior of the migrants is decentralized and lacks a command structure, but its uniform aim is to achieve an acknowledged purpose, and it is operating according to a well-defined plan. And what is that plan? What was the Groping Jihad trying to achieve in the Cologne Hauptbahnhof that night?
The first motive was the obvious one: a bunch of sex-deprived testosterone-infused men were out on the town to have a bit of fun with the “uncovered meat” left lying around by the infidels. These culture-enrichers come from a society where women are property, and have no protected status unless their ownership (by a man) is clearly indicated. Uncovered, shamelessly dressed women with no owner accompanying them are considered prostitutes. Or simply objects for the satisfaction of whatever man happens upon them. That was the clear, immediate, unambiguous motive for the molestation and rape of young Western women.
The second layer of purpose reveals itself in the way these young men formed into disciplined small groups and acted in a coordinated fashion, simultaneously in dozens of different cities: This was warfare. The events of New Year’s Eve were jihad, war against the infidel.
And they were also a form of terrorism. Allah commands his followers to strike terror into the hearts of the unbelievers, and that is exactly what the Groping Jihad did. German women (and presumably many of the men) are now terrified of the Hosts of Mohammed.

Yes this is war. Of course Islam has declared war against the West for 1400 years now. The only question left to ask is this: will Europe side with its enemies and commit continental suicide, or will it wake up and respond before it is too late?

7 Replies to “Civil War in Europe?”