Europe is in a mess. Many think it is on the verge of major crisis, if not collapse, unless something is done quickly. With failed immigration policies, misplaced multiculturalism, and politically correct self-loathing, there is not a day that goes by without more shocking headlines appearing.

Just trying to keep up on the daily madness being played out in Europe is a fulltime job. I could easily write a daily article on the ongoing chaos in Europe and not even scratch the surface of what is happening there. So all I can do here is just offer the briefest of outlines on some of the current developments.

Let me begin with the broader picture then move on to more specific items. One of the big news items is the admission by top European officials that most “refugees” are not needy asylum seekers, but simply economic migrants. As one report states:

More than half of those fleeing to Europe from the Middle East and Africa are economic migrants and not asylum seekers fleeing the horrors of war in Iraq or Syria, according to first vice-president of the European Commission, Frans Timmermans.
Quoting what he said were new, unpublished, figures from the EU border agency, Frontex, Mr Timmermans said: “More than half of the people now coming to Europe come from countries where you can assume they have no reason whatsoever to ask for refugee status … more than half, 60 percent.”
Those 60 percent were predominantly from north Africa, mainly Moroccans or Tunisians who were leaving their own countries for “economic reasons” and attempting to travel to Europe through Turkey, the former Netherlands foreign minister told the Dutch national broadcaster, NOS.

Now I have been in the developing world often, including in Tunisia. Of course one can understand completely how so many of these folk want to leave their backwards, impoverished and Islamic hellholes and go to the free and prosperous West. 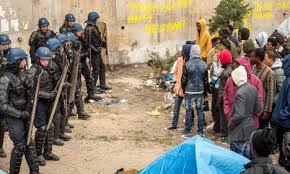 I would not doubt that there are at least a billion people who would do so tomorrow if they could. But of course that is not how the real world works. If we allow anyone and everyone into the West for whatever reason, that is a recipe for disaster.

And guess what? That is exactly what we see now happening in Europe and other parts of the West. An open slather policy has resulted in absolute chaos, with things getting worse by the day. How many Westerners for example are being raped, or killed, or both, by these newly arrived migrants?

And how many of them were well-meaning but utterly clueless and reckless bleeding heart liberals who held up signs demanding a free pass to all these foreigners? I have shared plenty of these stories, such as that of poor Elin:

Supposedly, she was a member of the “We Like Diversity” Facebook page, called herself “multicultural” and a supporter of Third-world immigration into Sweden, the country of her birth. Maybe in those last few moments of life, she changed her mind about a few things, as if it made any difference. On that day, Elin and her African immigrant killer were riding the same tram to the Hisingen neighbourhood in Sweden.
Shortly thereafter Krantz was found raped and murdered in a wooded area not far from the tram stop. Her 23-year-old African “refugee” (who supposedly once lived in the US) killer was arrested shortly after the killing. He was charged with murder and aggravated rape. According to the prosecutors, the attack was one of “extreme ruthlessness”.

Tragically there are plenty of such stories. Here is another:

Alexandra Mezher was young, beautiful and, above all, kind. She was also the face of a new and idyllic Sweden. The 22-year-old’s family hailed from Lebanon. Ms Mezher began working at an asylum centre a few months ago, helping unaccompanied minor migrants adapt to life in their adopted home.
Now her alleged murder at the hands of one of those young migrants threatens to shatter that idyllic image of the Scandinavian country, already under strain as it reacts to an influx of hundreds of thousands of refugees. “It is so terrible. She was a person who wanted to do good,” Ms Mezher’s cousin told Swedish newspaper Expressen. “And then he murdered her when she was doing her job.
“It is the Swedish politicians’ fault that she is dead,” the cousin added. Ms Mezher was allegedly stabbed in the back on Monday by a 15-year-old migrant at the refugee centre for unaccompanied migrants aged 14 to 17.

A 10-year-old boy has been raped at a public swimming pool in Vienna, according to local media reports. Local newspaper Kronen Zeitung described the assailant as a 20-year-old Iraqi refugee, who was arrested at the scene of the incident in late December. It was reported that the child was taken to hospital for treatment over “severe” injuries.

And consider this update to the story:

The mother of the boy who was raped by an Iraqi migrant in a swimming pool in Austria, has said she regrets teaching her children to be welcoming to migrants and described the man’s defence as ‘just monstrous’. The boy’s mother Dunja, who arrived in Austria as an immigrant in the 90s from Serbia during the Civil War, said she had always taught her five children to offer the same hospitality to new arrivals that she had herself received.
Upon hearing her son’s attacker’s claim he had ‘too much sexual energy’, Dunja criticised his defence as ‘just monstrous’ and insisted he should be sent to prison and then be deported. She said she ‘regretted’ teaching her children to be welcoming to migrants. The boy, known only as Goran, had to be hospitalised with serious injuries and his mother said her son has been crying himself to sleep every night since the attack.

These stories can be heard all over Europe, and now many countries are belatedly reacting. Consider a few recent news reports:

Security authorities are growing increasingly concerned by the rising number of sex attacks by gangs of migrants which appear to be spreading across Europe. Finland and Sweden today became the latest European countries to issue warnings to women to be wary of the threat of sex attacks following fresh reports of sexual assaults in the last week, while the Viennese police chief advised women not to go outside alone in Vienna.
The warnings come as reports emerged that Austrian and German police tried to cover-up the issue over fears of reprisal attacks on asylum seekers and damage to the countries’ tourist trade.
Dozens of arrests have been made today in connection with the wave of recent sex attacks across Europe. Finnish police said today that they had been tipped off about plans by groups of asylum seekers to sexually harass women following an unusually high level of sexual harassment cases in Helsinki.
‘There hasn’t been this kind of harassment on previous New Year’s Eves or other occasions for that matter… This is a completely new phenomenon in Helsinki,’ said deputy police chief Ilkka Koskimaki. Police in Germany are investigating more than 150 cases across five German cities where women have been attacked by the ‘organised Arab or North African gangs, police said.

Many European countries are now sending refugees away:

Austria has sent hundreds of refugees back to Slovenia for lying about their nationality, a police spokesman said. “We assume that some are trying to take advantage of the situation, knowing very well that they have little chance of being granted asylum in Austria and Germany,” the police spokesman said.
While carrying out spot checks on the 3,000 daily arrivals, translators and police apparently noticed an increase in people whose nationalities and language skills did not match.

Germany is sending hundreds of refugees and migrants back to Austria every day as pressure grows on Angela Merkel to fulfil her pledge to “drastically decrease” the number of people arriving. The Chancellor made that promise last month and pressure has mounted further in Germany since police said asylum seekers were involved in the New Year’s Eve attacks on women in Cologne and other cities.
There was widespread praise for Ms Merkel’s opening of the border to all Syrians in August but border controls with Austria were reintroduced in mid-September and the arrival of 1.1 million asylum seekers by the end of the year raised concerns about housing and infrastructure. Germany remains the destination for the bulk of migrants still crossing the Aegean to Greece and making their way along the long Western Balkan Route.

Finland is the latest country to announce plans to boot out migrants, with plans to send 20,000 packing. The Finnish government is set to deport two thirds of the 32,000 asylum seekers it received last year whose applications have been turned down. More than 20,000 of Finland’s asylum-seekers are from Iraq.
The announcement comes after Sweden said it would send 80,000 asylum seekers back to their home countries on chartered flights. The two Nordic countries are both struggling to cope with an unprecedented influx of refugees and migrants fleeing war and misery in the Middle East and elsewhere.

This of course is just a smattering of the many news items coming out of Europe. They have a problem. A big problem. But hey, don’t take my word for it. Simply consider the words of one woman, Simone from Calais, France, about what has happened there because of illegal immigrants.

Her 15-minute video should be seen by every single person in the West. It is a real eye-opener and does better than anything to describe the “death of civilisation” there: www.youtube.com/watch?v=UKAQX74yRyc

13 Replies to “Europe, Refugees and Chaos”