With a hardcore socialist seeking to become President of the United States, and having just won the New Hampshire primary, it is worth looking briefly at both matters: Sanders and socialism. As to the former, the Vermont Senator is a self-declared socialist whose proposed policies are frightening in the extreme.

Bernie Sanders’ success in the Democratic primary is a sure sign that many liberal Americans have swung leftward to embrace a “socialist” label that even Barack Obama avoided during his own campaign just eight years ago. The Wall Street Journal reported that Sanders is “so liberal he resisted joining the Democratic Party for decades” and “hasn’t changed his views since his first election to office 35 years ago.”
Gathered below are 10 socialist ideas the Vermont senator is pushing in his race for the White House.
1. Free college
2. Single-payer healthcare
3. Scandinavian-style socialism
4. Massive wealth redistribution 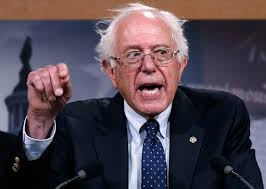 Or as Paul Sperry writes, Sanders

proposes completely nationalizing our health care system and putting private health insurance and drug companies “out of business.” He also wants to break up “big banks” and control the energy industry, while providing “free” college tuition, a “living wage” and guaranteed homeownership and jobs through massive public works projects. Price tag: $18 trillion. Who will pay for it all? You will. Sanders plans to not only soak the rich with a 90 percent-plus tax rate, while charging Wall Street a “speculation tax,” but hit every American with a “global-warming tax.” Of course, even that wouldn’t cover the cost of his communist schemes; a President Sanders would eventually soak the middle class he claims to champion. From each according to his ability, to each according to his need, right?…
What’s revolting is how this hardcore commie’s campaign has gotten this far. With his ascendancy in both Iowa and New Hampshire, Sanders is no longer just a fool; he’s now a dangerous fool. While it may be hard to hate the old codger, it’s easy — and virtuous — to hate his un-American ideas. They should be swept into the dustbin with the rest of communist history.

For more background on this guy, read the entire article. But Sperry is right to say “he’s not even a socialist. He’s a communist.” But instead of focusing on Clinton’s main competition for the Democratic nomination, let me spend the rest of this piece reminding you what socialism is really all about.

With whole libraries already available on the topic, I cannot do too much here. Indeed, my own library of hundreds of books on this topic is safely sitting back at home, but I am on the other side of the country at the moment. So let me offer just a smattering of quotes – some of my favourite quotes on the dangers and delusions of socialism.

“The Communists. The Jacobins. The Communards. The Maoists. The Khmer Rouge. They all caused untold suffering in the phony and vain attempt to make everyone equal… phony because it was just a fig leaf for terrible people to seize power. We are not supposed to be all equal. Let’s just forget that. We are supposed to have equal rights under law. If we do that, we have done enough. If we try to engineer outcomes, if we overturn tradition to make everyone the same, we ruin society. If we upset tradition to allow for an equal shot at the starting gate, everyone wins, except for the charlatans and would be dictators. Yet another reason to be a Republican. Give everyone an equal shot — but do not require equal outcomes or even roughly equal outcomes by law. That way lies catastrophe. Every soul deserves a shot at a Cadillac, but not everyone should be guaranteed a Cadillac… that way lie the tumbrels and the guillotine.” Ben Stein

“Government’s view of the economy could be summed up in a few short phrases: If it moves, tax it. If it keeps moving, regulate it. And if it stops moving, subsidize it.” Ronald Reagan

“Millions of individuals making their own decisions in the marketplace will always allocate resources better than any centralized government planning process.” Ronald Reagan

“Socialism only works in two places: Heaven where they don’t need it and hell where they already have it.” Ronald Reagan

“Socialists ignore the side of man that is the spirit. They can provide you shelter, fill your belly with bacon and beans, treat you when you’re ill, all the things guaranteed to a prisoner or a slave. They don’t understand that we also dream.” Ronald Reagan

“Socialists have always spent much of their time seeking new titles for their beliefs, because the old versions so quickly become outdated and discredited.” Margaret Thatcher

“For the socialist, each new discovery revealed a ‘problem’ for which the repression of human activity by the state was the only ‘solution’.” Margaret Thatcher

“No theory of government was ever given a fairer test or more prolonged experiment in a democratic country than democratic socialism received in Britain. Yet it was a miserable failure in every aspect.” Margaret Thatcher

“To cure the British disease with socialism was like trying to cure leukaemia with leeches.” Margaret Thatcher

“The problem with socialism is that you eventually run out of other people’s money.” Margaret Thatcher

“I went to the University of Chicago as a Marxist, after a year of studying under Milton Friedman I was still a Marxist, but one summer of working for the government was enough to turn me around. I realized that government was nowhere near capable of doing what the people on the Left wanted government to do, and we’d be lucky if they didn’t make matters worse.” Thomas Sowell

“If the preconceptions of the Left were correct, central planning by educated elites who had vast amounts of statistical data at their fingertips and expertise readily available, and were backed by the power of government, should have been more successful than market economies where millions of individuals pursued their own individual interests willy-nilly. But, by the end of the 20th century, even socialist and communist governments began abandoning central planning and allowing more market competition.” Thomas Sowell

“Socialism in general has a record of failure so blatant that only an intellectual could ignore or evade it.” Thomas Sowell

“What socialism, fascism and other ideologies of the left have in common is an assumption that some very wise people – like themselves – need to take decisions out of the hands of lesser people, like the rest of us, and impose those decisions by government fiat.” Thomas Sowell

“In the Western world, countries that were once the crucible of freedom are slipping remorselessly into a thinly disguised serfdom in which an ever higher proportion of your assets are annexed by the state as superlandlord. Big government is where nations go to die – not in Keynes’ ‘long run,’ but sooner than you think.” Mark Steyn

“If you put the federal government in charge of the Sahara Desert, in 5 years there’d be a shortage of sand.” Milton Friedman

“I reject as impracticable the insane Socialist idea that we could have a system whereby the whole national production of the country, with all its infinite ramifications, should be organized and directed by a permanent official, however able, from some central office. The idea is not only impossible, but unthinkable. If it was even attempted it would produce a most terrible shrinkage and destruction of productive energy.” Winston Churchill

“Socialism is the philosophy of failure, the creed of ignorance and the gospel of envy.” Winston Churchill

“There is no virtue in compulsory government charity, and there is no virtue in advocating it. A politician who portrays himself as ‘caring’ and ‘sensitive’ because he wants to expand the government’s charitable programs is merely saying that he’s willing to try to do good with other people’s money. Well, who isn’t? And a voter who takes pride in supporting such programs is telling us that he’ll do good with his own money – if a gun is held to his head.” P.J. O’Rourke

“Socialism is the religion people get when they lose their religion.” Richard John Neuhaus

12 Replies to “Socialism, Sanders and (In)Sanity”