As our culture continues to spiral down the septic tank, eventually that produces a backlash. After a while decent people have had enough, and start to stand against the sleaze, degradation and corruption of our culture. And when our children are especially being targeted and abused by the sexual libertines and social revolutionaries, then the reaction really starts to kick in.

There have always been concerned parents who have resisted the moral decay and radical agendas of the coercive utopians, but as things get worse, more voices begin to be heard. In the past day or two I have found three cases of incensed Australian mothers speaking out, declaring ‘enough is enough’.

All three mums have had a gutful of the sexualisation of their kids, and want no more of it. All three have fearlessly and resolutely spoken out against this evil, and have gotten media attention for doing so. So let me focus on each of these three brave women, and hold them up as examples for you to emulate.

The first is a Melbourne mother who is sick of pro-homosexual and gender-bending propaganda being rammed down the throats of her children. One article on this opens as follows:

A website promoted by the Safe Schools Coalition is teaching students how to bind their breasts and “tuck in” male genitalia. The Minus 18 website, which is partially funded by the state government, gives step-by-step instructions on how to deal with “chest dysphoria” and includes seven different binding methods.
Mother of four Cella White withdrew her children from Frankston High over concerns about the Safe Schools Coalition program about transgender awareness. Ms White also expressed concerns about the website. “You are either born a boy or girl, I believe in mother nature, I want my kids to value their body, the breast binding is a real issue, we should be teaching kids to love themselves,” she said….
The government-funded program by the Safe Schools Coalition is designed to promote inclusiveness for ‘same sex attracted, intersex and gender diverse’ students, but critics say it is indoctrinating children in sexual identity politics under the pretence of a bullying program.
“It was announced in science class that boys could wear school dresses next year,” Ms White said. “They’re telling my children to call transgender children by their requested pronoun. What is the benefit to my son? He’s got a learning disability, he’s struggling with his times tables, he doesn’t need to deal with this.”
The mother of four was particularly concerned about any changes in bathroom policy that could see her daughter sharing a bathroom with a gender diverse student. “It could be a year 12 student of the opposite-born sex in the bathroom with my year 7 daughter who is blind,” Ms White said. “This isn’t about safe schools, it’s transgenderism and gay activism bought into the classroom. I know other parents who are not happy.”…
Ms White, who has complained to the education department and Safe Schools Coalition, said she is not religious but is coming forward to make other parents aware of “what their children are being taught. It’s being presented as an anti-bullying program but the education department said it’s a sexual diversity program,” she said. “Apart from this I love the school, I’m in mourning, I went there, my siblings went there, I told everyone how good they were.”

Another mother of four, this time from Perth, has also been battling this pernicious material for some time now. She was recently interviewed by the Australian but her comments did not make it into the newspaper article, so I asked Emily McKenna what she told the reporter. This is the gist of what she had said: 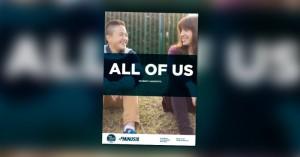 With progressive minded parents in our school advocating for the “Safe School Coalition” and my four-year-old starting kindy with two children from two separate same-sex lesbian households, I knew that it would be a matter of time before my children would be bullied for our family’s traditional marriage views.
The Safe Schools Coalition is being presented here in Western Australia by the AIDS Council. That information alone is alarming let alone the details taught in the “All of Us” booklet convincing children to force their bodies to stop growing as intended by nature.
Sharyn O’Neil, Director General at WA Education Department initially assured many prominent leaders here that the SSC would not go ahead in WA, however these minority groups don’t like no for an answer and in October 2015 the classroom diversity plan was rolled out into 7 senior schools and one primary school. This was a matter of three months after I had met with her about politicising our children in the classroom with relation to the climate change agenda. She assured me personally that it wouldn’t happen again.
After looking into our options as Christian parents, we have decided that our children’s future education would be best taught and overseen by us at home. We want our children to get back to learning their ABC’s and 123’s, and not be indoctrinated in all the latest politically correct sexuality!

Finally, a Queensland mother has gotten up in arms of the sexualisation of children as well. As a news item reports:

Nikita Friedman was so angered by what she believed was inappropriate clothing being sold for young girls by Big W she took to social media to voice her outrage. “Why on earth does my 1-year-old need to have shorts so short that her nappy is hanging out? Little girls are not sex objects. Gender bias is disgusting,” the Queensland mum wrote on the retail giant’s Facebook page. “I couldn’t find a single pair of shorts in the girl’s section today with an inseam of more than a couple of centimetres. Where is the variety and choice for parents looking to teach their children about sun safety and self respect? Not at Big W this month, that’s for sure!”
She also posted a photo comparing size one shorts for girls and boys, demonstrating the clear difference in length.
The post, which now appears to have been removed, received over 60,000 likes and 4,700 comments. Friedman edited her initial post to add that she believed it was important to let retailers know when customers are dissatisfied.
“The simple fact is that numbers talk and maybe seeing 1600 parents agree with my post after only 5 hours might make Big W stand up and listen for once to what parents want,’ she wrote just five hours after she published the popular post,” she wrote. The post attracted a lot of debate about whether the length of the shorts for boys and girls is an issue. Many parents jumped to support Friedman in the comments, with some congratulating her for taking a stand.

I am so glad that mothers are speaking out like this. They certainly should be. It is time to take a stand against all this sleaze, and the targeting of our children. We need many more concerned citizens to be raising their voices like this. If enough people speak out, things may begin to change.

Oh, and just one last question: when are we going to hear some fathers speaking out? Where are all the men? We need them to be a voice for our children as well.

10 Replies to “Mothers Speaking Out”