When the West was still moral, rational, and Christian, a core principle was ‘women and children first’. But the West is no longer any of these things, so we have declared that it’s every man for himself, and women and children can just take a hike.

That is about as good a way as any of determining if a culture is in terminal decline. We have now officially declared that the wellbeing of women and children does not mean beans. All that matters is for individual adults to do anything they like, and let everyone else be damned.

We see this perfectly in the mental and moral madness known as the gender bender agenda. Every day we discover new horror stories about how women and children are being attacked and abused – literally and otherwise – by the radical sexual anarchists who are doing their best to destroy our culture. 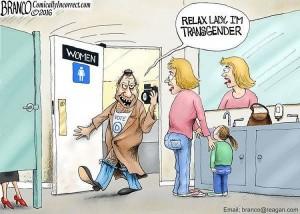 Examples are now endless and it is a full time job just to keep up with them all. Let me offer just a few headlines and opening lines from these many cases, beginning with North America:

-Canada Prepares Nationwide Ban on Anti-Transgender Propaganda
May 18, 2016
Citing the need to make transgender people “feel safe and secure in who they are,” Canada’s Minister of Justice Jody Wilson-Raybould introduced legislation Tuesday that would prohibit discrimination on the basis of “gender identity” or “gender expression” and make anti-transgender “hate propaganda” punishable by up to two years in prison.
dailycaller.com/2016/05/18/canada-prepares-nationwide-ban-on-anti-transgender-propaganda/

-New York City imposes fines up to $250,000 for refusing to call trans person ‘ze’ or ‘hir’
May 19, 2016
New York City’s human rights commission says it will fine New York employers and landlords up to $250,000 for using the wrong pronoun to refer to a transgender person.
www.lifesitenews.com/news/new-york-city-imposes-fines-up-to-250000-for-refusing-to-call-trans-person

-Girls must get over their ‘discomfort’ at seeing male genitals in locker room: Charlotte Observer
May 20, 2016
Girls need to get over the “discomfort” they may feel at seeing male genitalia in the locker room, the editorial board of one of North Carolina’s largest newspapers wrote in a piece supporting the Obama administration’s transgender school facilities edict.
www.lifesitenews.com/opinion/girls-must-get-over-their-discomfort-at-seeing-male-genitals-in-locker-room

-The most dangerous, and underreported, part of Obama’s transgender edict
May 20, 2016
The most offensive part of the new policy is that, under the Obama administration’s federal guidance:
-School districts must allow biological males and females to spend the night together in the same hotel room on field trips;
-Colleges must let men who say they are transgender be roommates with one or more women; and
-School officials cannot even tell those young women or their parents in advance that their new roommate is a man, without risking a federal lawsuit.
www.lifesitenews.com/blogs/not-just-bathrooms-the-most-dangerous-and-underreported-part-of-obamas-tran

And have a look at these 20 disturbing stories of sordid incidents in bathrooms, changing rooms, and so on:
www.breitbart.com/big-government/2016/04/23/twenty-stories-proving-targets-pro-transgender-bathroom-policy-danger-women-children/

Rod Dreher speaks to the real endgame in mind here:

Trans activist Riki Wilchins, writing in the gay magazine The Advocate, says that the real goal that fellow gay and trans activists should be pushing for is “blowing up the binary.” Excerpt:
“What really needs to be contested here is not just our right to use bathrooms with dignity (which would personally be very welcome), but the entire underlying hetero-binary structuring of the world queers must inhabit. This is the real struggle, and queer activists have been talking about it at least since the 1970s of Gay Liberation, even as the movement it spawned has continued to nudge it aside. All of which is to say, transgender advocates and their allies are doing incredible work. But they have finally and perhaps unwittingly opened the gender Pandora’s Box, and over the next few years all sorts of unexpected non-binary things, like Maria, are about to come popping out. This is going to be interesting.”
That is to say, they want to destroy the concepts of male and female entirely. This is what they’re after, and they’re not going to stop until it is accomplished. If you think the federal courts or Democratic administrations are going to stop it, you have a lot more faith than I do in the moral sanity of American elites.
www.theamericanconservative.com/dreher/the-sexual-revolution-tipping-point/

Freedom doesn’t need reassignment surgery. But the scalpel is out. The anesthesia has been administered. Tragically, most are asleep. Overnight, we are witnessing the most radical (and destructive) transformation in America’s legal and cultural landscape than we’ve ever seen before. President Obama has long declared his intentions of “fundamentally transforming the United States of America”. No one realized he meant the change would be of a sexual nature.
We’ve gone from “no one should have a say what goes on in the privacy of someone’s bedroom” to forced conformation through the loss of your job or business, the imposing of steep fines or even the threat of prison. Bow to the rainbow god of LGBTQXYZ activism or you will be assimilated. I thought the Borg were some Star Trek fiction. But it’s the Obama administration and its fascist efforts to silence opposition and demand allegiance to the flag of the united states of LGBT fascism.
www.lifesitenews.com/blogs/america-in-trans-ition-how-lgbt-activism-turns-freedom-into-fascism

Of course all this is coming soon to a school, restroom or change room near you in Australia as well:

-Primary and high schools should have gender-neutral bathrooms to become more ‘inclusive of sexual orientation and gender diversity’, according to a West Australian academic
May 20, 2016
www.theaustralian.com.au/federal-election-2016/federal-election-2016-academic-calls-for-genderneutral-bathrooms-at-school/news-story/4d05841793cee5ad377e36b3b6b79982

-Federal election 2016: pressure to end protection for churches
May 20, 2016
Bill Shorten is being challenged to stamp out protections for churches in Australia’s anti-discrimination laws after Labor confirmed it would review the matter if it won power. The Greens have called on Mr Shorten to declare his position on the religious exemption from anti-discrimination laws after days of debate over whether churches and faith-based charities would keep their special treatment.
www.theaustralian.com.au/federal-election-2016/federal-election-2016-pressure-to-end-protection-for-churches/news-story/53dacf78db5de66c171c7cdf501b5b13

Women and children are the real victims here, and the PC social engineers do not give a rip. But things are all going nicely according to plan. The cultural Marxists are achieving everything they wanted. As American feminist and lesbian Tammy Bruce said about the targeting of children in her 2003 book, The Death of Right and Wrong:

The radicals in control of the gay establishment want children in their world of moral decay, lack of self-restraint, and moral relativism. Why? How better to truly belong to the majority (when you’re really on the fringe) than by taking possession of the next generation? By targeting children, you can start indoctrinating the next generation with the false construct that gay people deserve special treatment and special laws.

Let me conclude with a shocking story from the US as told by my colleague Katy Faust:

Meanwhile, Melissa at a 24 Hour Fitness in Seattle gives us a portrait of 2016 “progress”.
“Today I went to the gym at lunch and when I went into the locker room to change, I saw a man… Completely naked. I quickly turned around in a panic thinking I had walked into the men’s locker room instead of the women’s. Nope, I was in fact in the women’s locker room. With the change of policy I knew there was nothing I could do so I walked in, the man made eye contact and I walked past the first bay where he was into the second one (there were only two).
I was about to start changing and realized how uncomfortable I was. He could easily go one row over and see me. How could I know for sure if he was transgender or a creepy guy taking advantage of the system? All I knew was that he was DEFINITELY a guy now… Regardless of how he was born.
I ended up going in the back to the shower and toilet area where I found all the rest of the women in the locker room. We all had the same idea… To get changed in the bathroom stalls instead of in the open area for privacy.
None of us had the courage to speak to management about this either for the fear that we would be labeled something we are not. This has nothing to do about being for or against the LBGT community. It’s the fact that we don’t feel comfortable seeing a man in our dressing room and that we have no way to tell if he is going to take advantage of the new policy or us. It was extremely uncomfortable.
When I walked out, he had changed into slacks and a button up top. In all areas, he was a man… Looked and dressed like one. How is this ok?! What if there were little girls in there? I don’t understand how this policy was ever allowed and that it hasn’t been converted back yet!”

Every single woman and child is now at risk in the West. All this will simply accelerate and spiral hopelessly out of control – unless of course a sleeping and apathetic populace wakes up, takes courage, and starts doing something about it. Unless we do, it is women and children last.