So what does Florida, mass murder, and Ramadan have to do with each other? Quite a bit actually. In another horrific jihad attack, some 50 people have been killed and over 50 injured in a homosexual nightclub in Orlando Florida. This great tragedy is still an ongoing story, but already we know some details. 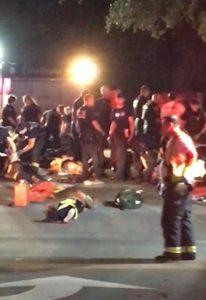 One man with a number of weapons launched what was a well-planned attack. He was eventually killed by police. As one news reports states:

“It appears he was organized and well-prepared,” the chief said, adding that the shooter had an assault-type weapon, a handgun and “some type of (other) device on him.” Law enforcement sources told CNN that the device, which was strapped to the suspect, was possibly explosive, but authorities don’t know if it was real or not.
A canine unit indicated there were explosives inside the suspect’s car as well, the sources said. At least nine officers were involved in the shootout, Mina said. Several coroner vans were seen traveling toward the nightclub….
Orlando authorities said they consider the violence an act of domestic terror. The FBI is involved. While investigators are exploring all angles, they “have suggestions the individual has leanings towards (Islamic terrorism), but right now we can’t say definitely,” said Ron Hopper, assistant special agent in charge of the FBI’s Orlando bureau.

Other reports identified the terrorist as Omar Mateen. Says one: “Police have not confirmed the identity of the gunman, but he is believed to be Omar Saddiqui Mateen. Mateen, 29, from Port St Lucie in Florida, was born in the US to Afghan parents. CNN is reporting that he had military training. ABC News reporting that he ‘came onto the radar’ of police, but was not the target of an active investigation.”

Another report said this: “Mateen was identified as a man who was a US citizen born in 1986 to parents from Afghanistan who lived in Port St. Lucie, FL, who law enforcement has characterized as having sympathy for, or ties to Islamic terrorism. The terrorist was well prepared with two weapons, including an assault weapon, and an explosive device.”

Of interest is that this shooting occurred during Ramadan. This year Ramadan runs from the 6th of June until the 5th of July. The Islamic holy month is thought by clueless Westerners to be just a time of peace, with fasting in the daytime and feasting at night.

But nothing could be further from the truth. As I wrote several years ago, Ramadan has historic ties with jihad and bloodshed. As I wrote back then:

Contrary to the belief that Ramadan is a time when no jihad or fighting should take place, it is the exact opposite. This month is in fact the time where Allah grants military victories to his followers through jihad. It is known in Islamic history as a key period for jihad. It goes back to year one in fact. But don’t take my word for it. Consider the words of one Islamic website on this:
“Jihad is the summit of Islam. Its virtue is countlessly high, as mentioned in many places of the Koran and Sunnah. The Prophet, peace and blessings of Allah be upon him, said: ‘Verily, there are one hundred degrees in Paradise which Allah has reserved for the fighters in His cause. The distance between every two degrees is like the distance between the sky and the Earth, so if you ask Allah for anything, ask Him for the Firdaus, for it is the last part of Paradise and the highest part of Paradise, and at its top there is the Throne of Beneficent, and from it gush forth the rivers of Paradise’. (al-Bukhari).
“The month of Ramadan in the life of the Prophet (pbuh) and the righteous ancestors was a month of forthcoming. The greatest battles during the lifetime of the Prophet (pbuh) occurred in this blessed month, the month of jihad, zeal and enthusiasm. The first battle in the history of Islam was the battle of Badr. This event became a dividing line between the era of humiliation and weakness, and the beginning of the era of force and revival of the case of the Prophet (pbuh) and the believers. This day became a turning point in the spreading of the call of the Prophet (pbuh).”

So jihadist attacks and Islamic terrorism actually gets ramped up during Ramadan. And this is another frightful example of it. Of course the Islam connection will be downplayed by one and all, from Obama to the media to the usual dhimmi talking heads.

‘Just a lone wolf.’ ‘Just another workplace incident.’ ‘He likely had mental problems.’ ‘He was driven to do this by oppressive Islamophobia in America.’ ‘What he did has nothing to do with Islam.’ ‘We need stricter gun control.’ Indeed, we are starting to hear these lame mantras already.

And of course all of this makes for a major dilemma for the left and the mainstream media: Just who do they side with here? All the killed homosexual night clubbers, or the Muslim terrorist and killer? Both groups receive victim status and preferential treatment in the West.

Both are the darlings of the secular left. So when you have one group targeting another group, just who will be defended and exonerated here? Who will be sided with? It is a tough one I realise for many. I have no such qualms here.

Thus we have here a real hate crime. But it is not a Christian hate crime which the secular left always talks about. This was an Islamic hate crime. It was a hatred of the West and a hatred of homosexuals. Yet all the elites can do now is ramble on about the need for more gun control. It is not more gun control that we need but more Islam control.

Let us pray for all the grieving family members and friends. These people did not deserve to die this way. It is time the West woke up to the real nature of Islam.

11 Replies to “Jihad in Orlando: It Must Be Ramadan”