Just hours after the tragedy in Orlando where 50 young people were gunned down by a devout Muslim, the excuses have been pouring in by all the usual suspects. Every lousy excuse one can dream up has been heard – everything except the simple truth.

Instead of calling this what it is – an Islamic hate crime and jihad attack – the secular left elites from Obama on down have made every stupid excuse in the book for this deplorable act: it of course has nothing to do with Islam, and somehow Americans and “Islamophobia” and guns are really to blame.

These appalling excuses are as predictable as they are reprehensible. And this happens every single time Islam shows its true colours. So many idiotic things have already been said about this that all I can do is list some of the real doozies here. And the list will be dated by the time I post this. But here are just a few:

-NBC’s “Meet The Press,” national correspondent Joy Reid said that the core issue was about “how easy it is to get a gun.” Um no, Joy. The core issue is about how easy it is for devout Muslims to freely do their thing in America and how clowns like her and Obummer facilitate all this.

-Steven Thrasher of the Guardian said: “Let’s not give in to fear after the Orlando shooting.” Yeah right. If a Christian had done this, every church in the country would be now targeted and all Christians feared to be terrorists. But because a Muslim did it, we must make excuses and exonerate Islam at all costs.

-American Civil Liberties Union attorney Chase Strangio said that Christian conservatives are responsible for the mass shooting at the homosexual bar because they “created this anti-queer climate.” OK, makes lotta sense. Christians who want to protect marriage and family, and care about the wellbeing of children, are now those directly responsible for pulling the trigger on Sunday. Sure, I can see that.

-Obama and the Democrats are already seeking even more gun control because of this attack. Um, what is needed instead is a whole lot more Islam control. But Obama and the Dems will never take that stance – they can’t, they are fully in bed with Islam.

-Florida officials have invited a Muslim cleric to speak to the media in order “to preempt a possible backlash against the Muslim community”. Maybe if we saw mass protests on the streets by “moderate” Muslims condemning all Islamic violence and jihad, we would be a bit less fearful. But I sure don’t see that happening anywhere.

-Homosexual celebrity, Perez Hilton tweeted this: “If you do not support #GunReformNOW in America, then please unfollow me and block me and continue enabling murderers! YOU SICK F**KS!!!!” Yep, forget the real culprit, Islam, and just talk about guns again. Makes perfect sense. 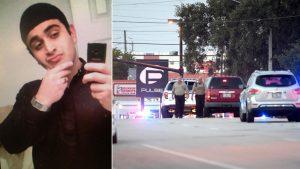 -Florida Senator Geraldine Thompson blamed the deaths on gun shows. Oh really? Millions of law abiding Americans attend gun shows all the time and manage never to kill anyone. But a member of the political ideology known as Islam shoots up an entire nightclub, and somehow gun shows are to blame – and Islam has nothing to do with it.

Thankfully not everyone is a hyper-left moonbeam on this issue. There are some voices of sanity which are struggling to be heard here. So let me finish with a few of them. Senator Ted Cruz for example issued a statement which reads in part:

Our nation is at war. From 9/11 to the Boston Marathon, from Fort Hood to Chattanooga, from San Bernardino to last night’s horrific attack in Orlando, radical Islamic terrorism has declared jihad on America… Our hearts go out to those killed and wounded last night. Our prayers are with their families, and with all their grieving loved ones.
It is a time for action. We need a Commander in Chief who will speak the truth, and who will unleash the full force and fury of the American military to utterly destroy ISIS and its affiliates. We need to pass the Expatriate Terrorist Act, so that known ISIS terrorists cannot use U.S. passports to return to America and wage jihad. We need a President who is serious – who will identify the enemy by name and do everything necessary to defeat it.
The next few days will be sadly predictable. Democrats will try to use this attack to change the subject. As a matter of rigid ideology, far too many Democrats – from Barack Obama to Hillary Clinton – will refuse to utter the words ‘radical Islamic terrorism.’ They will claim this attack, like they claimed every previous attack, was isolated and had nothing to do with the vicious Islamist theology that is daily waging war on us across the globe. And they will try to exploit this terror attack to undermine the Second Amendment right to keep and bear arms of law-abiding Americans.
Enough is enough. What we need is for every American – Democrat and Republican – to come together, abandon political correctness, and unite in defeating radical Islamic terrorism….
Today, all of America stands in solidarity with the people of Orlando. All of us should lift them up in prayer, demand action, and if you have any information about the Orlando shooter or potential radical Islamic terror plots, please act to keep us safe by using the FBI tips website: https://tips.fbi.gov.

As to the foolishness about more gun control somehow solving all our problems, a helpful piece by Dr Michael Hurd has just appeared. Let me offer its closing paragraphs:

When a drunk driver kills an innocent pedestrian, we don’t call it a “car-related” tragedy. We call it a drunk driving tragedy. Yet with gun-related violence, we fixate on the weapon and completely ignore all other factors (particularly when the shooter is Muslim).
It makes total sense that progressives are pro-gun control. Progressives are the ones who find a government solution for everything. “There ought to be a law” is their solution to any conceivable problem. If Freud were alive, he’d call it a wish-fulfilment mechanism. I call it magical thinking. It’s all fantasy. It’s a fantasy that some authority figure will somehow take care of us, against all reason, regardless of any known facts. They actually think that if you pass a law making guns illegal, it will stop people who wish to do evil and destructive things from doing those things. “Government has the power to stop it by fulfilling my wish.” Some cherished political hack signs a law in the Rose Garden of the White House, and magically, all is well. (Just like Obamacare, right?) But these are the same people who believe that government can create a vibrant economy, generate first-rate medical care out of nothing, and provide utopia on earth at no effort (except to the hated 1 percent, and they have no rights, anyway). Progressives who inhabit our media, executive and judicial establishment are wrong about virtually everything. Why on earth should we listen to them about guns?
Blaming criminal actions on guns is like blaming financial crimes on money – “If there were no money, financial crimes would not be possible.” Actually, socialists like Bernie Sanders already kind of believe that. Or blaming hateful atrocities (like Nazi Germany, or shoot ups in discos) on the existence of oxygen – “If people could not breathe, we would not have the space in which to do these things.” Actually, the most extreme environmentalists already believe human beings are a blight on the planet. These are not the kind of people from whom we should seek guidance on how to combat crime.
I am sick of the lecturing and sermonizing of anti-gun zealots. “Oh, I hate guns,” they say, with sneering and condescending superiority. The implication is that to hate guns is to hate the kind of violence we too often see take place. What rational person could not detest that horrific violence? But the issue is not guns; the issue is in whose hands the guns are located. The peaceful people who own guns for self-defense are not causing this violence. The people who will continue to commit acts of violence or terrorism will continue to do so, whether we confiscate the guns from peace-loving people, or not.
Stop exploiting the slaughtered, you high priests and priestesses of gun bans. Stop insisting that the only way to stop these things from happening is to repeal the First and Second Amendments. Even if that were true, it would not be worth it to live in a world with no liberty. Totalitarian dictatorships are dull, gray, depressing places. Far more innocent people die in dictatorships than in free countries, or even semi-free countries such as our own.
Terrorists are pushing Americans to give up on individual rights and freedom, to throw away a precious legacy so few in human history have ever enjoyed. If we bow our heads and give in, then that’s on us – not the terrorists.

As I say, just as soon as I post this article, it will already be outdated, because many more lunatic comments will be made about this tragic shooting. It is now all so predictable. Thus I for one will seek to present an alternative point of view.

And in this case it is quite simple and straight forward: this was yet another act of Islamic jihad. It was an Islamic hate crime fully based on everything Islam believes in and stands for. Until we deal with the root cause – Islam itself – we will never win the war on Islamic terror.

Of course most of our leaders refuse to do this. They refuse to even mention the “I” word or the “M” word. Therefore they are just as much a part of the problem as are the jihadists.

21 Replies to “Orlando and Islam: The Lousy Excuses Pour In”