If you are a Muslim leader who hates homosexuals, Jews, Christians and other decadent infidels, you can have a free pass to travel in the West and freely preach your hate, but if you are a Christian leader who stands up for life, for children, for family, and for freedom, you are evil and must be banned.

That in a nutshell is how much of the West is now operating. It will make any excuse for Islam, even for Islamic terrorists, while ganging up on anyone who dares to stand publically for Christ and for that which is right. That my friends is exactly why the West is losing.

We have had a perfect illustration of this madness once again happening following the Islamic attack leaving over 100 casualties in Orlando Florida. Says one newspaper report:

A controversial Islamic scholar who preaches for homosexuals to be “executed” allegedly gave sermons in Orlando weeks before the gay nightclub massacre and is now in Sydney. According to Fusion Dr Farrokh Sekaleshfar is a British-born Shi’a Muslim scholar who lives in Qum, Iran and allegedly gave a sermon to Muslims about executing the gay people in Orlando two weeks before the deadly massacre took place.
In a presentation by the Students for Academic Awareness group that took place at the University of Michigan in 2013, Sekaleshfar addressed the topic of homosexuality claiming that their punishment should be “death.” Portions of this university sermon were recorded by ABC 9’S WFTV and have since been re-uploaded to YouTube by Islamophobic group, The United West.
In the videos, the controversial preacher says that the only way to deal with the “phenomenon of homosexuality” was to “get rid of them” and to do so out of “compassion.” “Death is the sentence. There’s nothing to be embarrassed about this. Death is the sentence,” Sekaleshfar says. “We have to have that compassion for people. With homosexuals, it’s the same. Out of compassion, let’s get rid of them now.”

So someone like this gets into Australia with no questions asked. But remember a year ago when a Christian pro-life leader from America wanted to come here to speak, and the Australian government actually banned him? So here is what we now know: Muslims preaching death are welcome but Christians preaching life are not. I wrote about that story here: billmuehlenberg.com/2015/10/02/australias-appalling-treatment-of-political-prisoner-newman/ 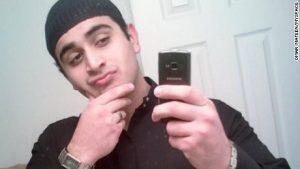 And by the way, this hate preacher is entirely correct to say that Islam teaches that homosexuals are deserving of death. This is not just an IS thing but an Islam thing. I pulled out my copy of the authoritative legal commentary on Islam, The Reliance of the Traveller.

But back to Mateen: he was known as a wild hater, and he had made plenty of threats about blacks, homosexuals and others, yet because he was a Muslim, no one dared do anything about it. Even the FBI knew all about him but failed to act. Such is the paralysing power of “Islamophobia”. Better to allow a hate-filled Muslim a free run than even dare to challenge him about his obvious hate speech and bloodthirsty ideology. As one newspaper report stated:

Gilroy described Mateen as a devout Muslim who brought a prayer mat to work and prayed several times a day. “There was never a moment where he didn’t have anger and rage,” Gilroy told “The Kelly File”. “And he was always loud and cursing. And anytime a female or a black person came by, he would use horrible words.” On one occasion, Gilroy said, Mateen told him, “I would just like to kill all those [n-words]” after a conversation between Mateen and a black man. “A few times he mentioned homosexuals and Jewish people,” Gilroy said, “but we didn’t deal with them quite as often, so it was mostly women and blacks, because those were the people in front of us.”

And in the meantime, those who warn about the dangers of the political ideology known as Islam are targeted and censored in the West. Hate-preaching clerics and followers of Islam can say what they want, when they want, and where they want, but dare to speak the truth about Islam and the dhimmi police will come down on you like a ton of bricks. Consider the case of Pamela Geller. For speaking out about Mateen and the real nature of Islam, Facebook actually banned her! As one report states:

Facebook has deleted “Stop Islamization Of America,” a group with over 50,000 members in the wake of deadly Islamic terror attack in Orlando, Florida. The page was run by Pamela Geller, the well-known Islam critic and Breitbart contributor who led efforts to stop construction of the Ground Zero Mosque. Geller reported the removal of her Facebook group on Twitter, and called on supporters to politely request its reinstatement in a subsequent post on her personal website.

As FB said about the group, it was removed because “it violated our Terms of Use”. So let me see if I have this straight: FB is happy to have hard-core Muslims preaching hate and death to the infidels – including homosexuals – on its pages but if someone seeks to warn about this, they are viewed as evil and must be shut down. Yep, makes perfect sense. Thanks FB.

On another page Geller posted this amazing bit of info: “In the wake of the Orlando Ramadan slaughter, the U.S. Postal Service unveiled its new stamp commemorating the two most holy Islamic holidays. It isn’t lost on me that this stamp is being issued as a forever stamp. You just can’t make this stuff up. Of course, terror-tied Islamic supremacist groups are celebrating.”

Yep, leave it to the fools running America today to celebrate the bloodiest month of the year in the Islamic calendar – Ramadan – while doing everything it can to clamp down on those warning about this murderous death cult. See here on the Ramadan-jihad connection: billmuehlenberg.com/2014/07/02/ramadan-and-jihad/

Islam, the left and double standards

The double standards and rank hypocrisy of the left has been on full display yet again after the Orlando jihadist attacks. I have already documented plenty of examples of this, but every hour we get more amazing offerings from the loony left.

If a Christian for the sake of conscience refuses to bake a cake for a lesbian wedding, they are demonised by everyone for being hate-filled and bigoted, and Christianity as a whole is seen as an intolerant and repressive religion. Yet when Muslim jihadists do their thing fully in the name of Islam, every secular left loon in the West rallies to their defence, and insists that religion has nothing to do with it.

As one commentator put it: “A Muslim can murder 50 homosexuals and liberals still defend the religion, but a Christian who refuses to bake a homosexual’s wedding cake endures nationwide shaming on behalf of their religion. This is how ridiculous liberals look to everybody these days.”

And once again we have all the clueless dhimmi elites telling us this attack had nothing to do with Islam, and we should not tar all Muslims with the same brush as Omar Mateen. ‘He does not represent all Muslims’ the lefties insist. Yet they do insist that he somehow represents every gun-owner in America.

Or get this doozy from the world’s largest baby-killing outfit, Planned Parenthood. They actually had the audacity to tweet this about the massacre: “#Islam doesn’t foment the violence alleged gunman Omar Mateen enacted, toxic masculinity & a global culture of imperialist homophobia does”.

Wow, oh wow! Islam had nothing to do with this, even though the devout Muslim Mateen specifically said it has everything to do with it. No, it is masculinity and homophobia! Can the secular left get any more idiotic than this?

Indeed, an entire article or two could be written about how all this has been twisted by the left from much-needed Islam control to the ever spurious gun control. A Muslim did the killing, not guns. As Brendan O’Neill rightly stated, “Blaming guns for the Orlando massacre is as mad as blaming aeroplanes for 9/11. An obsession with the technical means of murder in preference to confronting the ideology behind it.”

I can guarantee you if a Christian had done this, Hillary, Obama, the Democrats and the left would all be calling for Christianity’s scalp. They would, without the slightest hesitation, demonise the entire Christian faith. This is the normal operating procedure of the left.

Oh, and here is a story to conclude with that you will not find in the lamestream media. The much hated Christian fast food company Chick Fil A which regularly gets demonised by the left and the MSM because it stands up for heterosexual marriage just did this:

In a shocking move, the Orlando location at University and Rouse Road fired up its grills on Sunday. The chain is notorious for not being open, ever, on the first day of the week. Employees cooked up hundreds of their famous chicken sandwiches. They brewed dozens of gallons of sweet tea.
Then, instead of making a single dime, they crated the product of their labor to the One Blood donation center. The food and drinks were handed out, free of charge, to all the people who had lined up to donate blood. So far, the only mentions of the incident have been from individuals on Facebook. They have posted photos thanking the restaurant for their thoughtfulness and generosity.

But by now we should realise a basic truth: our elites, leaders and media in the West hate with a passion Christianity and Christians, while doing everything they can to defend, exonerate and promote Islam and Muslims. And that is exactly why the West is going down the gurgler real fast: side with our enemies while standing against our friends.