There is a terrific way for a nation to be destroyed from within: simply have the nation’s leaders jump into bed with all the enemies of the nation while ignoring or resisting its friends. Yep, that will pretty much guarantee the results the enemies are looking for.

And we see this happening all over the West with Islam. Obama has turned this into an art form of course: he is the most pro-Islam, anti-Christian POTUS to ever occupy the White House. But there are plenty of other Western leaders who are just as bad.

Here in Australia our Prime Minister Malcolm Turnbull is another expert in all this. First, he stabbed in the back the sitting conservative PM, and now he is pushing his own leftist agenda, pretending to be a Liberal, just as Trump is pretending to be a Republican in America. 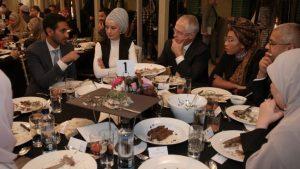 And part of his progressive agenda is to do just what progressives do: cosy up to Islam at all costs, and run roughshod over Christians and their values. Never mind that over 60 per cent of Australians call themselves Christians, while only some 2 per cent identify as Muslims.

Consider our own clueless dhimmi PM Malcolm Turnbull who proudly hosted the first ever government Ramadan dinner – held at Kirribilli House no less. With some 60 Muslims in attendance, the government had even invited Islamic preacher Sheik Shady Al-Suleiman to the Iftar dinner. This Australian-born Sheik once called AIDS a divine punishment for gays and said women would be “hung by their breasts in hell,” and women should not even look at men. He has also previously called for adulterers to be stoned to death and called on God to help “destroy the enemies of Islam”. Now Turnbull has been forced into an embarrassing backtrack on this, claiming he knew nothing about the preacher. Yeah, that is just the problem: he is completely clueless about Islam, full stop.

As to his ignorance about the hard-core sheik, one poster making the rounds rightly quips: “Claims he can safely screen 12,000 refugees; can’t screen guests to a dinner party”. Yes that is about it. But it is exactly because he is totally clueless about Islam that things like this keep happening.

The entire dinner was one big con job anyway. A real Islamic dinner in a Muslim country would of course be a men-only affair. This was simply designed for Western consumption, with a gullible PM and media falling for it hook, line and sinker.

And it is worth asking this: when was the last time Turnbull held a dinner for Christians? Or for Jews? Why does he only always pander to the tiny minority groups, be they homosexual activists or Muslims? How exactly is that leadership? And how is that conservative leadership?

It ain’t, because he is not a leader and he is not a conservative. He is simply another clueless wonder who thinks we should pander to Islam and live in fantasy land about it. He is doing just what Churchill warned against: “An appeaser is one who feeds a crocodile, hoping it will eat him last”.

Being buddies with the political ideology of Islam is a great way to destroy a nation from within. And that seems fully to be the agenda of mindless wonders like Turnbull, Obama, Merkel and others. Thankfully I am not alone in such concerns. Others have already criticised the Islamic dinner.

And several women today have columns which speak to this very issue. Let me start with Miranda Devine, who is so very often spot on about such matters. I love her title: “For Turnbull, ‘multi-faith’ only means Islam”. She writes:

Imagine the outrage if the Prime Minister had hosted an all-Christian table to the exclusion of any other religion at a supposedly multi-faith dinner in his home. Or an all Jewish table. Or an all-Syriac table in solidarity with persecuted Christians. But that would never happen in this age of appeasement.
When he could drag himself away from Waleed Aly, Turnbull told the assembled group: “We must stand together like we do tonight as one Australian family united against terrorism, racism, discrimination and violence.” It’s a pity his guest list didn’t reflect those fine sentiments. Of course it’s important for the PM to practice interfaith bridge-building and multicultural outreach, but pandering to the most aggressive religion at the expense of others is not a recipe for community harmony.
And it is cynical and divisive to insinuate that, if we want Muslims in our own country not to attack us, we must practice a craven appeasement, which includes turning a blind eye to extremist imams who, with the same soft voices that claim Islam is a “religion of peace”, advocate death to homosexuals, see nothing wrong with enslaving women as perpetual rape victims, or killing Jews, infidels and apostates.
Progressive secularists like Turnbull are busy expunging religion from public life, except when it comes to Islam, which dominates the political conversation as a reward for being troublesome. Christianity, meantime, which is the root of Western civilisation, is shunned from public life. This is despite the fact that Australia remains a Christian country, historically, culturally, and demographically.
More than 60 percent of Australians, 13.2 million people, declare themselves Christian at census time.… Muslims comprise just 2.2 percent, or 476,000 of the population, according to the 2011 census, slightly less than Buddhists at 2.5 percent (529,000), but more than Hindus at 1.3 percent (276,000) while Jews make up 0.5 percent (97,000).
Of the 4.8 million people (22 percent) who declare no religion, you could safely assume most would have Christian backgrounds. So why the special treatment from the PM for Islam, one of the smallest religions in the country? The appearance of political appeasement will cost the Coalition votes, and reaffirm suspicions that Turnbull is a politically correct progressive without the answers to the greatest problem of our time.

Yep, she’s got that right. The second writer today weighing into all this is former Abbott advisor Peta Credlin. Her piece has the title, “Islam threat ignored with a gay abandon”. She begins her article with these words:

Another week, another act of Islamist violence, another hate preacher arriving in Australia to spread his poison, another homegrown hate preacher proving it isn’t just an imported problem and the community getting more and more sick of political leaders failing to speak the truth. When will we finally get real and accept that there’s a deadly cancer within Islam?
The Orlando terrorist may have been a loner and perhaps struggling with his own sexuality but he was also a regular mosque-goer, an associate of the first American suicide bomber, someone who cheered the Twin Towers attack, had been previously investigated by the FBI as a terror risk and claimed to be a relative of Osama bin Laden.
In the midst of his premeditated killing spree, he called the emergency hotline to announce his allegiance to Islamic State. How many times must people kill chanting “Allahu Akbar” for our leaders to overcome their squeamishness and stop the patently ridiculous insistence that Islamist extremism has nothing to do with Islam.
This week, leaders including President Barack Obama, Prime Minister Malcolm Turnbull and Opposition Leader Bill Shorten yet again dodged around the “I” word while the world reeled in horror from yet another outrage perpetrated in its name.

If President Al Sisi of Egypt, himself a devout Muslim, can call for a “religious revolution” inside Islam, why can’t Western leaders support this call? Instead, are we so constrained by political correctness that we would rather trace the Orlando atrocity to homophobia than Islam so that it becomes a problem for us rather than for them?
Because that’s exactly how we have behaved when it comes to women. We would much rather find examples of Muslim women living free and open lives than expose the all-too-common examples of women suffering abuse, child marriage, lack of formal education, gender mutilation, bigamous marriages and more.
The right response to Islamist terrorism is abundantly clear: with our allies, we need a more resolute Middle Eastern military campaign against the caliphate which is its most obvious inspiration; at home, our police and security agencies need to be given all the resources and powers they need to monitor potential terrorists and disrupt potential attacks; we need to work with “live and let live” Muslims, here and abroad, to promote Islamic versions of the Reformation and the Enlightenment; and, most of all, we need to speak the truth.

Her article is far from ideal however. As to the issue of whether Islam is even capable of the reform she wants is a moot point. I have discussed that in detail elsewhere: https://billmuehlenberg.com/2011/11/30/on-reforming-islam/

And of course I would argue that Islam itself is the cancer! It is not some bad bits within Islam but the entire political ideology which is cancerous. And she made some silly PC remarks about ‘lax gun control laws’ etc. And a major problem here is why was she not saying these things years ago?

She should have given Tony Abbott this sort of advice a lot earlier – better late than never I suppose. But the good thing is various opinion makers are coming out of the closet and starting to get a bit real about Islam. It’s a pity most of our political leaders just don’t get it – or refuse to get it.

How many more innocent Westerners must be slaughtered to the tune of ‘Allahu Akbar’ before our leaders show some courage and get some smarts here? Judging by how Turnbull is going, we better not hold our breath.

3 Replies to “Cosying Up to Our Enemies, Ignoring Our Friends”