That passions are high and emotions are running wild over the upcoming US election goes without saying. But far too often feelings trump facts, and mere emoting takes over from sound reasoning. I have seen this in full measure over the past year, and it is painful to behold.

There are so many myths and misconceptions about this election that it is a full time job just to deal with them all. Indeed, it is becoming clear to me that the more people attack me and hate on me because of their Trump support, the less they actually know about American elections.

Most seem utterly clueless about all sorts of basic matters, both political and biblical. Therefore let me deal with five common myths I encounter on a daily basis.

‘We have no other choice: it is Trump or Clinton’

Um no, not at all. Are these folks really so clueless? There are of course all sorts of options here. For example, there are many other political parties fielding candidates for President. Those that may appeal to conservative voters would include the following, to name but a few: the Constitution Party of the U.S.; the Libertarian Party; the American Freedom Party, and so on. 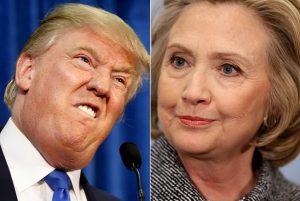 Plus there would be hundreds of independents and various write-in candidates. What are write-in candidates? They are those whose name is not on the official ballot but can nonetheless be written in as your preferred choice in most American states. This is a very common practice in American elections.

That the great bulk of these folks will not win the presidential election is immaterial: the point is, America is most certainly not confined to just choosing between the two top dogs. There is much more freedom to move here than most people suppose – especially many of my Australian friends who are not very up on how the American political system works.

Thus those who insist that Americans have only two choices – and two poisoned choices at that – are being quite misleading. Americans can in good measure vote for whoever they like in the election. That is why Ted Cruz was 100 per cent right to say that we should vote according to conscience, not just blindly sell our soul to the two main parties. No one needs to be tied to one of the main parties if they feel that they have abandoned them.

‘You are voting for Hillary then?’

I get so sick and tired of hearing this one. Every time I make the case for why I believe Trump is not at all someone I can support, I get some Trump zombie regurgitating the tired old line: “Oh, so you’re going to vote for Clinton then?” Um no.

Anyone who has read one word of the nearly 4000 articles on this site or heard me speak knows full well what I think about Hillary. She is appalling, and she will continue the destruction of America that we witnessed under Obama for the past eight years.

And anyone who has read the nearly two dozen articles I have written on Trump will know the raft of sound reasons I offer as to why I believe Trump will not be much better – and may in fact be even worse. He will certainly trash the conservative brand, as he has already trashed the Republican Party. I can support neither devilish choice.

Related to this is another common claim which is equally idiotic: “Oh, you’re not going to vote then, and you are telling others not to vote.” Duh. As I just pointed out, these two New York liberals are certainly not the only ones running and Americans can vote for who they like. To say one does not like the two liberals running does not mean one will not vote.

Next thing you know these same folks will be telling me, “If beating Clinton means selling my soul to the devil, that’s how it is.” And that is exactly where so many of these folks seem to be heading regrettably. Once Christianity and conservatism degenerate that far, they are both no longer recognisable, and I want absolutely nothing to do with either one.

Away with such appalling idolatry. Count me out of this insanity. No one has to vote for these two devils. People are free to vote for who they like. I certainly will not sell my soul for thirty pieces of Trump silver. Here I stand, I can do no other.

I hear this all the time from the Trumpians. ‘Yes, I admit, he spent his whole life as a liberal and a Democrat and Clinton supporter, but he is now evolving.’ They insist that he must have had some Damascus Road experience and is now one of us. Um, really?

They now believe every single word he says while pretending to be a conservative Republican, while disbelieving every single thing he said to the contrary for most of his life. There would be several choice terms we could use for someone who does this.

Imagine that: they disbelieve every single liberal thing Trump has said and done for the last 30 years, but believe as gospel truth (as if Jesus himself said it) the few conservative things he has thrown out over the past few months to con gullible conservatives to support him.

I would not want to buy a car from someone like that. What would you think of a Jewish person who grasped at anything he could possibly find in the words and writings of Hitler to ‘prove’ he really was not such a bad chap and did not really hate the Jews?

In similar fashion I am completely bewildered by conservatives who will clutch at anything – ANYTHING, no matter how remote, how sus, and how dodgy – that Trump said to ‘prove’ to us that he is actually a terrific guy and a real conservative. I am utterly staggered at this. He hurts my head and heart when I encounter this every day.

But I have written about this before. I have asked countless Trumpites to give me honest answers to the honest questions raised in this article. Not one – NOT ONE – has done so. Either they are unwilling or unable to do so. Believing in something (or someone) despite a mountain of evidence to the contrary is not warranted belief but mere superstition:

This is one of the most ridiculous and oft-heard claims made by rather clueless and biblically illiterate Christian Trump fans. They insist that God is using Trump just like he used pagan kings in Old Testament times. But two minutes of clear thinking and biblical realism will show how unhelpful this nonsense is.

That God can use anything or anyone for his purposes is of course a given. Please tells us something we don’t know. He can even use Balaam’s ass for his purposes. So that of course is not the issue. The real issue is how God uses someone or something.

A pagan king can be used by God for good and for blessing, as was Cyrus when he allowed the Jews to return home and rebuild. But more often than not, as Scripture clearly demonstrates, a pagan ruler or nation is used by God as a curse, an instrument of his judgment. Assyria in Isaiah 10 is an obvious example of this.

There are countless other such examples. So of course God can use a Donald Trump – and a Hillary Clinton. But how are they being used? In my books they are both being used as instruments of divine judgment. They are both part of God’s just judgment on a rebellious and unrighteous America.

I just read again this morning Isaiah 30 and 31 about God’s anger unleashed when his people put their trust and faith in pagan rulers and pagan nations. That is always something God detests and breaks forth in judgment over. Yet that is just what I see millions of Christian Trumpites doing. They are in for a rude awakening.

See more on this here: billmuehlenberg.com/2016/02/28/memo-to-evangelical-trumpites-forget-the-crowds-and-ungodly-alliances/

Pray for one, but not the other

I am told over and over again that I must pray for Trump because God wants to use him. But for some odd reason these same Christians never tell me to do the same for other candidates. It seems only Trump must be held up to God in prayer.

To be honest, I will take the Christian Trumpites a lot more seriously when these double standards cease. When they start to talk about Clinton like they do Trump I might have a higher view of their Christianity. But I have yet to hear them say, ‘We must support and pray for Hillary Clinton – she is God’s chosen vessel for such a time as this.’

Either everyone has the possibility of being turned around by God’s grace and used for good, or no one does. But somehow I never hear that from the Trump groupies. Of course we are to pray for both these candidates. I have been doing so repeatedly. And I pray especially that God’s will be done, not my own preferences.

Since so many of my Australian friends, and even many American friends, seem a bit baffled by some of the normal acronyms used in this discussion, let me offer a few of the main ones here. (Of course I happen to think that self-education is a good thing, and a few seconds googling these for example would answer the questions most folks have!)

32 Replies to “5 Common Myths about the US Elections”