For true conservatives and Christians, the slow death of the Republican Party in America has been clearly observable for quite some time now. One RINO loser after another has been put forward by the GOP establishment machine to become POTUS, and one loss after another to the Democrats has occurred.

Many have asked if the Republicans can any longer be called a conservative party. It seems the just-held convention in Cleveland has dispelled any lingering doubts about this. Ramming through the mo 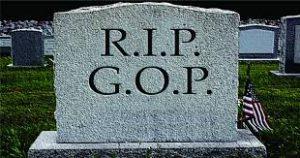 st hostile candidate to Christian and conservative values in recent memory is of course the major indicator of a party that has long ago given up the ghost.

Electing a lifelong liberal, Democrat supporter, and Clinton supporter, to take on the liberals, the Democrats, and Clinton, is as insane as you can get. It is as if the Dems did a deal with Donald to get Hillary into the White House. And the Republican establishment went along with this.

How else does one explain this madness? Trump could have simply remained a Democrat of course, but he knew that Hillary would get the nomination. So he decided to pretend that he was somehow a conservative Republican instead. He fooled plenty of gullible and clueless conservatives, and even some really clueless Christians.

And now we live with the worst choice in an American presidential election in living memory: two New York liberals who care nothing about America, but only care about themselves. It is the devil’s choice, and I can support neither. As I wrote in an earlier column:

My take on such a diabolical choice is simple and straightforward:

Why Hillary does not deserve my vote (or the vote of any true conservative):
-She is not a conservative
-She cares nothing about the US Constitution
-She has the character and integrity of a rattlesnake
-She is completely untrustworthy
-Her only concern is herself
-She is not a Christian
-She will destroy America

Why Donald does not deserve my vote (or the vote of any true conservative):
-He is not a conservative
-He cares nothing about the US Constitution
-He has the character and integrity of a rattlesnake
-He is completely untrustworthy
-His only concern is himself
-He is not a Christian
-He will destroy America

So now we have this non-choice – something analogous to being forced to choose between Hitler and Stalin. We had a genuine conservative running, yet the deluded masses rejected him. Reminds me of another occasion: ‘We want Barabbas.’

But of course it was not just the farce about Trump. The entire convention told us all we need to know about the death of the GOP. We all recall how the Democrats actually booed God at their last convention. Well, the Republicans came close, in booing the very heart and soul of conservative convictions: standing for freedom, especially freedom of conscience. For daring to stand for such crucial freedoms, Ted Cruz was actually booed by the hate-filled Trumpites.

As Michael Bauman rightly said about this sordid event: “How far has the GOP fallen? So far that it boos someone who says we ought to act according to the Constitution. That’s not as bad as the Democrats booing God, but it is colossally bad. And it means I’m no longer a Republican. I’m an American, and to be one REQUIRES supporting the Constitution, which is fundamentally necessary. I didn’t leave the GOP, it left me.”

And as Steve Deace put it: “Stop and think about the fact the GOP is threatened by Cruz telling Republicans to ‘vote their conscience.’ Let that one sink in for a moment. For the only reason that would be threatening is you’re admitting that a vote for Trump is a violation of conscience.”

Consider some other clear indications of how the Republican convention drove the nails into the coffin of conservatism even further. The first was actually allowing a pro-homosexual activist to have the microphone, and attack conservatives. Mind-boggling.

So we had the homosexual Peter Thiel cheerily doing his thing at the GOP convention, as he assailed Christians and conservatives: www.foxnews.com/politics/2016/07/21/gop-convention-first-openly-gay-speaker-acknowledges-his-sexuality.html

Robert Gagnon made some very important remarks about this:

Just caught the tail end of tech billionaire Peter Thiel’s speech at the RNC. Thiel was predictably dismissive of conservative and religious attempts to defend people who adhere to natural marriage against state coercion on homosexualism and transgenderism in schools, bathrooms, businesses, etc.
“When I was a kid the great debate was about how to defeat the Soviet Union. And we won. Now we are told that the great debate is about who gets to use which bathroom. This is a distraction from our real problem. Who cares?! Of course, every American has a unique identity. I am proud to be gay. I am proud to be a Republican. But most of all I am proud to be an American. I don’t pretend to agree with every plank in our party’s platform. But fake culture wars only distract us from our economic decline.”
Don’t you believe such deceptive rhetoric. Morality is more important than economy. If Trump was trying to reach out to those concerned about these issues, he just sent us a message loud and clear that he is not shifting in our direction but rather giving us the shaft. Message received.
My main concern about Trump is not that he might be as far left as Clinton (he’s not, though that’s a major expanse of territory) but that he will destroy the Republican Party from within. Ted Cruz certainly did the right thing last night.
The North Carolina Republican delegation felt betrayed by Thiel’s attack on their state’s bathroom policy, and that on a night that was supposed to be about unity, the night in which Trump gives his own speech. They and all Americans who honor God’s creation of “male and female” and rejecting a dishonoring of one’s birth sex have a right to feel that way. Stupid move on Trump’s part.
“I’ve long said that were he to become the nominee, Donald Trump would be the most pro-gay candidate the Republican Party has ever had,” said Gregory T. Angelo, president of the Log Cabin Republicans. “Thiel’s role as an official speaker at the RNC continues to bolster that assertion.” “It’s a huge breakthrough,” said Chris Barron, a prominent conservative gay rights advocate. “It is a reminder ? once again ? that Donald Trump is by far the most gay-friendly nominee of the Republican Party ever.”

Or as Steve Deace put it, The GOP convention booed “vote your conscience” but cheered a homosexual who accused Christians of inciting a fake culture war. Tell me again why I’m disobeying Jesus. Please.” Bryan Fisher put it this way:

“The GOP and its leadership crossed the Rubicon last night and committed itself irretrievably to the advance of the homosexual agenda. We must resist this advance with all the energy within us, but the outcome became much less certain last night. The enemy is no longer at the gates, he is inside the gates. May God help us all.”

And consider this amazing turn of events: the convention actually featured a Muslim saying prayers to Allah. Yes, a guy from the Muslims for Trump camp prayed at the convention. And Trump is going to keep us safe from Islam? Really? With all of his deals with Muslim rulers around the world? Welcome to the new GOP under Trump – no different to the Democrats in so many key areas.

Other stand-out moments could be mentioned. Just how many Trump family members spoke at the RNC, and just how many of them are still registered Democrats? I will let the Trumpites look up those numbers – although it is obvious they do not care one bit how many Democrats actually are taking over the GOP.

And don’t get me started on Trump’s speech at the convention. I am not usually a fan of libertarianism, but this piece does a good job of showing why we should be afraid, very afraid, of the demagogue strongman Trump: reason.com/blog/2016/07/22/donald-trumps-speech-at-the-rnc-last-nig

All this and more tells us about the death of the GOP. Many are now talking about forming a new and true conservative party. The GOP has already sold its soul to the devil. The one lone brave voice that did not sell out for 30 pieces of Trump’s silver was of course Ted Cruz.

While the Trumpites and the leftist media are claiming this spells the end of his political career, the opposite is in fact true. From the ashes of the GOP will arise a genuine party of freedom, conservatism, and constitutionalism, and Cruz will be the obvious choice to lead it. He sure will get my vote, and that of millions of other disaffected Republicans as well.

As one commentator, Willy Glen, summarised things: “It is official, the DNC/RNC merger is complete! MOSLIMS leading prayers, Gays center stage, democrats giving speeches and Conservative Christians dismissed!” The GOP is now dead. Trump and the RNC have destroyed not only the GOP but the conservative brand.

The Republican Party has been in its death throes for quite some time now. The Cleveland convention simply saw this pathetic shell of its former self put out of its memory. Good riddance and good bye.