Without wishing to start yet another world war (and if folks want to go on yet another attack, please stay away thanks – I have had enough!), some have asked me what I think about the rumours that have been going around that Donald Trump might have repented and may be a baby Christian. Well, if you really want to know, this is what I think:

First of all, this story has been around for a while now. And at best, it still seems to be in the rumour stage. Back in June stories emerged on this, and people like James Dobson of Focus on the Family fame were saying Trump had accepted Christ.

He and other Christians and Christian leaders made quite a to-do about all this at the time. One of the pieces on this back then which was quite influential was this one: www.charismanews.com/politics/elections/58042-dr-james-dobson-donald-trump-has-accepted-christ 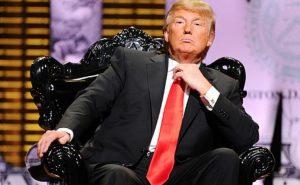 But just a bit later Dobson and some of the others had to backpedal a bit, admitting they had no firsthand knowledge or experience of this. Therefore he later said this in part on his website: “Only the Lord knows the condition of a person’s heart. I can only tell you what I’ve heard. First, Trump appears to be tender to things of the Spirit. I also hear that Paula White has known Trump for years and that she personally led him to Christ. Do I know that for sure? No. Do I know the details of that alleged conversion? I can’t say that I do.”

That was certainly a much more toned-down evaluation of things. And since then we have had speculation and conjecture, but I think we are all waiting to see something a bit more sure than mere hope and wishful thinking. So this is how I see things at the moment:

Only God of course knows the human heart, and he alone knows who have been truly regenerated by the Spirit of God. But we must be thoroughly biblical here. In part, we must be fruit inspectors. Consider just three important texts:

“But the fruit of the Spirit is love, joy, peace, forbearance, kindness, goodness, faithfulness, gentleness and self-control.” (Paul, Galatians 5:22-23)

Thus I will not be gullible and naïve here. Until I see some genuine evidence of biblical repentance, I sure will not foolishly jump on the Trump bandwagon. And the simple truth is this: if Trump really has been regenerated, the very first thing he should do I would think is withdraw from the race, end this charade, and get his own house in order. “What profit is it if you gain the whole world and lose your own soul” (Mark 8:36).

I pray just about every day that not just Trump but Hillary Clinton as well will get soundly and wondrously saved. However, I always find it very curious how so many Trump supporters tell us we need to pray for Trump, but I almost never hear them telling us to also pray for Hillary.

Indeed, these Trump supporters will say that people can change, meaning we should believe Trump is no longer, well, Trump. It seems what they really mean is that only people on their side can change. But people on the other side cannot change. Hillary seems to be beyond the pale.

It is as if God can only save Republican sinners, but he is incapable of saving Democrat sinners. Trump can be redeemed but Hillary cannot. Hmm. But I digress. As I say, I am praying for both of them on a regular basis.

And if their conversion does not happen, I also pray that they will be removed from their positions of power and influence one way or another. In this regard we can pray with David in Psalm 109:8: “Let his days be few and brief; And let others step forward to replace him.” That is a good biblical prayer to pray here.

And I should add one more thing here. When it comes to political leaders, I have often said that I would rather have a principled conservative with integrity and character in the White House, even if a non-Christian, than a Christian who does not have qualities like those. Simply being a Christian does not in itself necessarily make you a good president, a good baseball player, or a good violinist.

Let me mention a few related matters here. Can an immoral, arrogant pagan megalomaniac like Trump get saved? Of course he can! God is in the saving business, and if a lost sinner turns to Christ in faith and repentance, anyone can be marvellously born again.

But that is not the real issue here. The vital question is this: has he in fact become a genuine convert? It seems to me the jury is still out on this. When I heard him just the other day in the second debate proudly claiming that ‘no one respects women more than me’ I nearly barfed.

Of course his dedicated supporters will clutch at any straw possible, and talk about him still being a baby Christian, and so on. Um, why do I fear they will be using this rather lame excuse for years to come? As I say, if he really did get saved, he would be wise to ease up on all the politics and concentrate on getting his act together.

If after a few years of solid growth and Christian maturity he decides to again throw his hat into the political ring, that is up to him. But right now I do not believe America and the world can have someone this volatile, unstable and reckless – even if he were in fact a new believer.

Some have also noted that Trump has some religious advisors around him. Well this of course is standard fare for presidents – even pagan ones – to have “spiritual advisors”. Obama even has them! It is a good PR exercise if nothing else.

The fact that all US politicians need to convince the electorate that they are Christians – whether they actually are or not – is a longstanding feature of American political life. And Trump has long been an expert at selling himself, and at trying to convince others of who he wants them to think he is.

On a related front, many Trump disciples are going down the quite silly path of trying to compare Trump with all manner of biblical characters. I have heard plenty of them mentioned. I have even heard Trump supporters try to compare Trump to Christ. Really!

A popular push of late – especially after his appalling “Let’s make America grope again” revelations – is to try to convince us that Trump is just like King David. You know, David sinned and all, so Trump sinned and all – no problemo! Now this really is whacko stuff.

Sure, God can use anyone he wants, but how he uses them is crucial. In a recent discussion about the election one fellow said this to me: “But do not despair, I do take pleasure in knowing that God can use even a lowly Ass to do his will.” I replied, “Yes, an ass would be a far better candidate right now!”

But getting back to David, a terrific piece on this appeared recently by Michael Brown. You should read the whole thing, but let me quote a bit of it here:

First, David was a man after God’s own heart, meaning, a man who loved the character of God and the ways of God and the Word of God, a man who sought to please God, a man who longed deeply for God. None of this, even faintly, can be said of Donald Trump — at least, to this point in his life….
Second, David’s sin with Bathsheba, committing adultery with this married woman and then having her husband, Uriah, killed, was an absolutely horrific act, one for which he paid dearly. In fact, you could argue that his life was never the same after his sin. But it was the exception to the rule of his life, which is why Scripture said that “. . . David did what was right in the eyes of the LORD and did not turn aside from anything that he commanded him all the days of his life, except in the matter of Uriah the Hittite” (1 Kings 15:5).
In the case of Trump, ungodly behavior has been the pattern of his life, the rule rather than the exception, something for which he was known and of which he was proud. Again, the comparison breaks down dramatically.
Third, when David was confronted with his sin, he pointed no fingers, offered no justification and did not seek to minimize his guilt. Instead, he confessed his sin in the most humble, broken and contrite terms, pleading for undeserved mercy.
And this is where King David could teach Donald Trump a valuable lesson….
I would encourage Mr. Trump to get on his knees, all alone, to take out his favorite Bible, and to read Psalm 51 out loud. (Remember: This is the man who said publicly that he didn’t feel the need to ask forgiveness.) Let him read these words of repentance written by David after he was confronted by the prophet Nathan about his adultery and murder.

In sum, is Trump a Christian? Only God knows at this point. I see no evidence for it now, but it would be great if he did meet Jesus Christ and had a life-changing encounter with the living God. But as I say, if he did, this is of infinite worth, and something like being POTUS pales in comparison.

My advice would be this: if he is a new believer, he needs to take some time out and get grounded in the faith. But that is assuming that he in fact has had a genuine conversion experience. It remains to be seen if he has. Keep praying for Donald Trump. Oh, and keep praying for Hillary Clinton as well.

10 Replies to “Is Trump a Christian?”