Because fallen man – even those who are now Christians – are so easily deceived and led astray, the Bible contains numerous warnings about not allowing ourselves to be sucked into falsehood, deception and lies. Yet it happens all the time sadly.

The cults thrive and heresy spreads because so many people are gullible, undiscerning and open to every false teacher who might tickle their ears. This is a perennial problem, and none of us should think for a moment that we are somehow completely immune from all this. We are not.

There are so many warnings about deception, being deceived, and deceivers in the Bible, that I cannot mention them all here. Indeed, I have already penned articles listing many of the more important texts on this topic. See here for example: billmuehlenberg.com/2012/03/13/on-deception/ 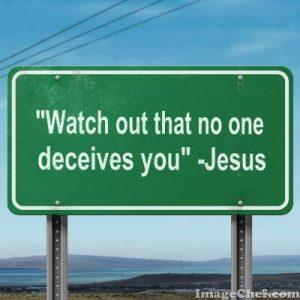 I have also written about the enormous power of deception, and how even the best people – including plenty of Christians – can so easily be deceived. It is frightening to behold, and I have witnessed plenty of cases of this over the years: billmuehlenberg.com/2016/08/04/deception-one-strongest-forces-universe/

And it is not just theological deception that can snare us and drag us down. There are all sorts of other varieties of deception out there, including political deception. How many millions of folks have been deceived by mesmerising and charismatic leaders who promise the world and entrap so many.

Hitler is not the only example we have of this in history. Even now we have politicians and others effectively claiming to be a human messiah who will solve all our problems and make nations great again. And millions of folks, including millions of believers, have fallen for such leaders, believing every word they say.

Discernment is lacking, gullibility is high, and the masses can be led so very easily by such leaders. It is always scary to encounter, and we have obviously not learned the lessons of history. Christians of all people should know better here, with so much in Scripture serving as a clear warning.

Yet we have plenty of these folks holding up their preferred political candidate – even lifelong immoral, arrogant, leftist ones – as God’s anointed who will save America and usher in a reign of righteousness. They foolishly go on about how God can use pagan kings, etc.

Of course he can – he is God, he is sovereign, and so he uses anyone and anything for his purposes. But it depends greatly on how someone is used. God fully used Judas for his purposes. Yet I don’t know of anyone who wants to be in his shoes.

Judas played his role, then killed himself, and went off to a lost eternity. This “son of perdition” (John 17:12) was used by God, but he is no role model. He is certainly not someone we should endorse, enthuse over, promote, put on a pedestal, or seek to have leading the masses.

I write all this of course because we are just hours away from the US presidential election. But also because an old television show I saw many years ago popped into my mind last night for some reason. When it did, it seemed to be a very good illustration of this very matter of deception, and people willing to believe anything, even despite evidence to the contrary.

I refer to a very riveting episode of The Twilight Zone aired back in 1962 called “To Serve Man”. It was another great episode in this TV series, and it seems so relevant to what we find today. The plot is as follows:

A group of aliens – the Kanamits – land on earth, and speak to the UN, telling earthlings they can make things great again: they can end poverty, hunger, war, and so on. They make grandiose promises of taking people to their planet to live in a paradise.

Millions are thrilled at all this, and many start volunteering to be flown to this planet. It all seems almost too good to be true. Indeed, there are some sceptics among the humans, but most just soak it all up. Of interest, the aliens leave a book behind after the UN speech, written in the unknown Kanamit language.

One man and his team seek to decipher the book and its contents. Eventually a staffer, Patty, manages to translate the title: To Serve Man. That certainly sounds promising, and convinces many more people to leave earth and go with the aliens to their planet.

The true believers are thrilled that the aliens have come to serve man. Michael Chambers, head of the cryptography staff, also thinks this may open up a whole new era. Eventually he gets his chance to head into space to experience this paradise. He is seen mounting the boarding stairs to the spaceship.

Spoiler alert: if you want to see the video of this, linked to just below, without knowing the surprise ending, stop reading now!

But just then Patty runs into the launching area with great consternation. A Kanamit guard holds her back, but she manages to cry out: “Mr. Chambers, don’t get on that ship! The rest of the book To Serve Man, it’s… it’s a cookbook!” Chambers tries to run back down the stairs, but a Kanamit prevents him from leaving, the stairs retract, and the spaceship takes off.

The episode closes with the host of the show Rod Serling providing an ominous voice-over, noting how man had devolved from “dust to dessert” and from “being the ruler of a planet to an ingredient in someone’s soup”. It was an ingenious episode of an often ingenious series. You can see it here: www.youtube.com/watch?v=vrabZFhnBIA

People are so desperate to believe what they want to believe, that they will go along with anything, no matter how questionable or dubious it may be. We have seen this happen so often in human history, where the mobs run with deception while rejecting the truth. Remember the crowds who rejected Jesus, screaming, “We want Barabbas”.

7 Replies to “Beware of Deception and Deceivers”