Political candidates can certainly bring division, but so too can religious leaders. One might suppose that a religious leader would want to unite everybody, and make us all one big happy family. Some religions do run along those lines. However it may surprise many folks to learn that sitting around a campfire singing Kumbaya was never the intention of one such leader: Jesus Christ.

He was about as divisive a public figure as you will ever find. One simply has to read the Gospels and Acts to see that this was the case – big time. No one who objectively reads these two books could ever come away with the impression that Jesus just wanted peace, happiness and a big love-in.

No, he came to earth knowing that his very person and his message would be hugely divisive, and he told his followers that they would experience the very same thing. To be a Christian is to follow in the footsteps of the Master, and if he was the most polarising and controversial figure around, then why should we expect things to be any different as his disciples? 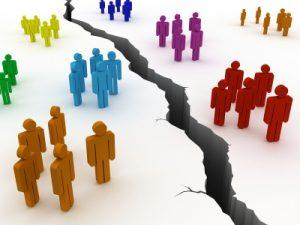 “Jesus divides” would make for a good and accurate bumper sticker. It would be just as true as “Jesus Saves” or “Jesus Loves You”. Yet it is a truth most Christian leaders today refuse to even discuss. They seek to play down the divisiveness and constant controversy Jesus caused wherever he went.

I have started to keep track of every time Jesus caused division, divided the crowds, upset people and caused social upheaval in his ministry. It is getting to be a very long list indeed. There is far too much biblical material to select from here. If I simply limit my results to just John’s Gospel and the Book of Acts, I still have well over 60 examples of this.

So let me offer just some of these passages from just these two books, beginning with John:

John 1:11 He came to that which was his own, but his own did not receive him.
John 5:16-18 So, because Jesus was doing these things on the Sabbath, the Jewish leaders began to persecute him. In his defense Jesus said to them, “My Father is always at his work to this very day, and I too am working.” For this reason they tried all the more to kill him; not only was he breaking the Sabbath, but he was even calling God his own Father, making himself equal with God.
John 6:67 From this time many of his disciples turned back and no longer followed him. “You do not want to leave too, do you?” Jesus asked the Twelve.
John 7:5-7 For even his own brothers did not believe in him. Therefore Jesus told them, “My time is not yet here; for you any time will do. The world cannot hate you, but it hates me because I testify that its works are evil.
John 7:12 Among the crowds there was widespread whispering about him. Some said, “He is a good man.” Others replied, “No, he deceives the people.”
John 7:20 “You are demon-possessed,” the crowd answered.
John 7:30-31 At this they tried to seize him, but no one laid a hand on him, because his hour had not yet come. Still, many in the crowd believed in him.
John 7:40-43 On hearing his words, some of the people said, “Surely this man is the Prophet.” Others said, “He is the Christ.” Still others asked, “How can the Christ come from Galilee? Does not the Scripture say that the Christ will come from David’s family and from Bethlehem, the town where David lived?” Thus the people were divided because of Jesus.
John 9:16 Some of the Pharisees said, “This man is not from God, for he does not keep the Sabbath.” But others asked, “How can a sinner do such miraculous signs?” So they were divided.
John 9:39 Jesus said, “For judgment I have come into this world so that the blind will see and those who see will become blind”.
John 10:19-21 The Jews who heard these words were again divided. Many of them said, “He is demon-possessed and raving mad. Why listen to him?” But others said, “These are not the sayings of a man possessed by a demon. Can a demon open the eyes of the blind?”
John 11:36-37 Then the Jews said, “See how he loved him!” But some of them said, “Could not he who opened the eyes of the blind man have kept this man from dying?”
John 11:45-46 Therefore many of the Jews who had come to visit Mary, and had seen what Jesus did, believed in him. But some of them went to the Pharisees and told them what Jesus had done.
John 12:10-11 So the chief priests made plans to kill Lazarus as well, for on account of him many of the Jews were going over to Jesus and believing in him.
John 12:18-19 Many people, because they had heard that he had performed this sign, went out to meet him. So the Pharisees said to one another, “See, this is getting us nowhere. Look how the whole world has gone after him!”
John 16:8-9 When he comes, he will prove the world to be in the wrong about sin and righteousness and judgment: about sin, because people do not believe in me;
John 16:33 “I have told you these things, so that in me you may have peace. In this world you will have trouble. But take heart! I have overcome the world.”
John 19:15 But they shouted, “Take him away! Take him away! Crucify him!”

And the followers of Christ in the Book of Acts faced the very same thing:

Acts 2:12-13 Amazed and perplexed, they asked one another, “What does this mean?” Some, however, made fun of them and said, “They have had too much wine.”
Acts 7:54-55 When the members of the Sanhedrin heard this, they were furious and gnashed their teeth at him. But Stephen, full of the Holy Spirit, looked up to heaven
Acts 9:23-24 After many days had gone by, there was a conspiracy among the Jews to kill him, but Saul learned of their plan. Day and night they kept close watch on the city gates in order to kill him.
Acts 9:29 He talked and debated with the Hellenistic Jews, but they tried to kill him.
Acts 13:44-45 On the next Sabbath almost the whole city gathered to hear the word of the Lord. When the Jews saw the crowds, they were filled with jealousy. They began to contradict what Paul was saying and heaped abuse on him.
Acts 16:19-21 When her owners realized that their hope of making money was gone, they seized Paul and Silas and dragged them into the marketplace to face the authorities. They brought them before the magistrates and said, “These men are Jews, and are throwing our city into an uproar by advocating customs unlawful for us Romans to accept or practice.”
Acts 17:8 When they heard this, the crowd and the city officials were thrown into turmoil.
Acts 19:23 About that time there arose a great disturbance about the Way.
Acts 20:22-23 “And now, compelled by the Spirit, I am going to Jerusalem, not knowing what will happen to me there. I only know that in every city the Holy Spirit warns me that prison and hardships are facing me.”
Acts 21:30-31 The whole city was aroused, and the people came running from all directions. Seizing Paul, they dragged him from the temple, and immediately the gates were shut. While they were trying to kill him, news reached the commander of the Roman troops that the whole city of Jerusalem was in an uproar.
Acts 22:22-23 The crowd listened to Paul until he said this. Then they raised their voices and shouted, “Rid the earth of him! He’s not fit to live!” As they were shouting and throwing off their cloaks and flinging dust into the air,
Acts 23:7 When he said this, a dispute broke out between the Pharisees and the Sadducees, and the assembly was divided.
Acts 24:5 We have found this man to be a troublemaker, stirring up riots among the Jews all over the world. He is a ringleader of the Nazarene sect.
Acts 26:24 At this point Festus interrupted Paul’s defense. “You are out of your mind, Paul!” he shouted. “Your great learning is driving you insane.”

No one reading these select few passages can deny that Christ and his message were inherently divisive, resulted in strong reactions, and easily pitted people against each other. Such is the nature of the gospel. It always divides. It is meant to produce a reaction: you either accept it or reject it – there is no middle ground here.

Of course to say all this is not to suggest that we go out of our way to cause trouble, to create offence, and to be divisive. Simply being a faithful follower of Christ will ensure all that. So we seek to be irenic, tactful and gracious as we present Christ, but we should never be surprised at the hostile reaction we will nonetheless get.

If your sole aim as a believer is to have everyone be happy with you, love you, and enjoy being with you, that may indicate you are not a real Christ follower. While we all want to be appreciated and honoured and well-received, that is not the normal lot of the disciple of Christ.

If you fearlessly proclaim the gospel of Jesus Christ, you should expect the very same reactions that Jesus and the disciples got: some will heed your message and appreciate you telling it to them, and some will reject your message and hate you for sharing it.

You will bring division in other words – just like Jesus did. And just like the disciples did. So do not let such mixed reactions puzzle you or worry you. Just be faithful to Christ and keep proclaiming the gospel. And leave the results up to God.

But the way to proceed is not to seek to be a men pleaser. Nor is it to try to take away the offence of the gospel. Nor is it to make Jesus into some tree-hugging hippie who loves everything. It is to present Jesus and his message as it is, and let the listener worry about how they will respond.

As Dorothy Sayers wrote: “If all men are offended because of Christ, let them be offended; but where is the sense of their being offended at something that is not Christ and is nothing like him? We do him singularly little honour by watering down his personality till it could not offend a fly. Surely it is not the business of the Church to adapt Christ to men, but to adapt men to Christ.”

6 Replies to “The Great Divider”