While the infantile left is throwing a major dummy spit in the US, complete with rioting on the streets because of democratic elections in action, we have the same thing going on in Australia. With the Trump win the cry-babies of the left are out in force, showing us that they care nothing for elections and democracy.

The exact same thing can be said of the Australian left. They too hate elections and democracy. By refusing to let the Australian people decide on the marriage debate with a plebiscite, these militants demonstrate how completely opposed they are to things like freedom and a decent public debate. 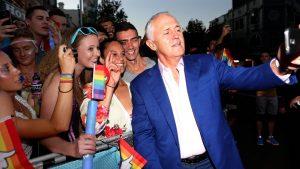 Of course all this is done in the name of tolerance, diversity and acceptance. Yeah right. Homosexuals as individuals have every right that others have, yet they keep demanding more and more. They are never satisfied. This shows you how useless policies of appeasement are.

You can never please the militants, so seeking to placate them does no good at all. The more you give in to them, the more they will demand of you. Consider the latest outrageous example of this. Our Prime Minister has just been told that he is banned from marching in the next Sydney Gay and Lesbian Mardi Gras.

Even though he has marched with them in previous years, he is now being given the cold shoulder because he is still running with his promise to put the issue of homosexual marriage in the hands of the people, via the plebiscite. Labor and the Greens have of course shot this down, so now we have no forward motion on the issue.

Either folks will have to wait until the next federal election to see if Labor can get back in, or they will have yet more private members’ bills introduced on this, even though we already have had around 18 such bills, all of which have been defeated.

So Malcolm Turnbull is sticking to his promise on the plebiscite, Labor and the Greens have blocked it in the Senate, and now the angry militants are throwing another hissy fit, just like their colleagues in America. Consider one news item from today’s press on this story:

Malcolm Turnbull will be banned from attending Sydney’s Gay and Lesbian Mardi Gras as an official guest as a protest against his push for national plebiscite on same sex marriage. The Prime Minister will be informed that he’s off the invitation list after an activist takeover of the Mardi Gras at today’s annual general meeting demanded the organisation issue a statement.
But the PM can still turn up at the world famous celebration of gay pride and mingle in the streets, which is held each year in his electorate. Last year Mr Turnbull became the first sitting Prime Minister to attend the Mardi Gras, defying a backlash on the Liberal backbench.
But a meeting of the Mardi Gras has resolved to take him off the invitation list over the plebiscite, which gay activists oppose because they fear it will fuel hate speech and the debate over Safe Schools programs discussing sexuality. The motion states that “the Annual General Meeting of Sydney Gay and Lesbian Mardi Gras does not believe that a Prime Minister who denies us equality should be welcome as an official guest at our parade.”

This is so bizarre and outrageous for so many reasons. Um earth calling militants: Turnbull is of course pro-homosexuality and pro-homosexual marriage. He simply said it should be up to the will of the people to decide this. Hmm, that makes perfect sense to me given that the last time I checked, Australia was a democracy.

But the activists want nothing of it. They know full well that if the people were actually allowed to have their say on this, traditional marriage would be affirmed and this revolutionary assault on marriage would be rejected. Thus they demand that Parliament deal with it instead of the people.

Despite the 18 or so consecutive losses on this, they know how effective a war of attrition can be. Just keep hammering away, and keep introducing one homosexual marriage bill after another, and eventually you will wear down enough politicians to see it finally passed.

That is classic left-wing tactics: bypass the people and engage in guerrilla warfare in the political arena. Works all the time. But whatever you do, do not let the people decide. That is always dangerous. The recent Brexit vote and the more recent Trump vote are clear examples of this.

So poor Malcolm cannot go this year – at least in any sort of official capacity. Of course Turnbull should never have gone there in the first place! It was ridiculous and scandalous for a sitting Prime Minister to attend and affirm and condone this march of sleaze and lasciviousness.

But as a lifelong lefty on such matters, what do we expect? So I am glad he has been rebuffed in this fashion. As I say, you can never satisfy the demands of the left. They are insatiable. The more the activists get, the more they will demand. That is why we should never opt for appeasement.

It is as Churchill warned: “An appeaser is one who feeds a crocodile, hoping it will eat him last.” Turnbull has engaged in far too much naïve and unhelpful appeasement. It is time he started acting like a Liberal leader, not like a stooge for Labor and the Greens.

14 Replies to “You Can Never Satisfy the Leftist Militants”