A devout Muslim does not believe in democracy. Neither does he believe in the rule of law, freedom, pluralism, religious liberty, freedom of conscience, the equality of women, the equality of non-Muslims, and so on. For these reasons alone we have to ask whether there is any way that Islam is compatible with Western democracies, values and freedoms.

While many Muslims may well enjoy and favour Western beliefs and values, the religion of Islam does not. Thus all those who love the West and its benefits must be very wary of the political ideology known as Islam. And they must all be willing to defend the West against those who would war against it. 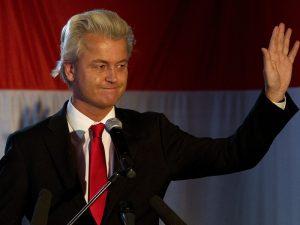 Islam is an exclusive religion which brooks no rivals and tolerates no opposition. Setting up a universal caliphate with everyone in submission to Allah is the true desire of every faithful Muslim. Thus they cannot peacefully coexist with the infidel who refuses to bow to the demands of Islam.

To warn about those who would seek to destroy us and our way of life would seem to be the height of patriotism, love of freedom, and common sense. Yet incredibly those who are strongly speaking out about the threat of Islam and the dangers it poses to the free West are often being vilified, condemned and railroaded by Western leaders and the forces of Political Correctness.

Perhaps at the top of this list is the Dutch politician Geert Wilders. He has been fighting this fight for years, and he knows all about the costs one has to pay for this, being under 24/7 protection by security personnel because of all the threats he has received from incensed Muslims.

He is being tried at the moment – again – in a Dutch Court, this time for ‘vilifying’ Dutch Moroccans. As one news report states:

A trial began against Dutch far-right politician Geert Wilders on Monday for inciting racial hatred against Moroccans – but with not a hair of the controversial politician in sight. Wilders is being tried for racial discrimination and inciting hatred, after he led a 2014 party rally to call for “fewer, fewer” Moroccans in the Netherlands. According to Dutch newspaper the Trouw, if he wins, his lawyer Geert-Jan Knoops wants to claim his costs from the ‘named parties’ – thought to be largely Dutch Moroccans – whose complaints and claims have brought the trial.

He certainly has not been cowed by this latest trial, and spoke out strongly on Wednesday. As another news service reports:

Dutch anti-Islam politician Geert Wilders has told a court that his trial for alleged hate speech is a “charade, a disgrace for the Netherlands, a mockery for our society”. In a televised statement on the last day of the trial, he said that if he was convicted “millions of Dutch citizens will be convicted with me”. The charges were brought after he led a chant for fewer Moroccans in the Netherlands at a rally 18 months ago. He denies inciting racial hatred.
Mr Wilders has denounced the trial as an attempt to suppress freedom of speech. If convicted, he faces a fine and a year in prison. The verdict is due next month. The populist politician, who had previously refused to attend the trial, addressed a three-judge bench at a high-security courthouse near Amsterdam’s Schiphol airport.

Thankfully his 3200 word speech is now available in English, and I am very pleased to be able to share parts of it with you here. He began with these words:

Mr. President, Members of the Court,
When I decided to address you here today, by making a final statement in this trial against freedom of speech, many people reacted by telling me it is useless. That you, the court, have already written the sentencing verdict a while ago. That everything indicates that you have already convicted me. And perhaps that is true. Nevertheless, here I am. Because I never give up. And I have a message for you and the Netherlands.
For centuries, the Netherlands are a symbol of freedom.
When one says Netherlands, one says freedom. And that is also true, perhaps especially, for those who have a different opinion than the establishment, the opposition. And our most important freedom is freedom of speech.
We, Dutch, say whatever is close to our hearts. And that is precisely what makes our country great. Freedom of speech is our pride.
And that, precisely that, is at stake here, today.
I refuse to believe that we are simply giving this freedom up. Because we are Dutch. That is why we never mince our words. And I, too, will never do that. And I am proud of that. No-one will be able to silence me.
Moreover, members of the court, for me personally, freedom of speech is the only freedom I still have. Every day, I am reminded of that. This morning, for example. I woke up in a safe-house. I got into an armored car and was driven in a convoy to this high security courtroom at Schiphol. The bodyguards, the blue flashing lights, the sirens. Every day again. It is hell. But I am also intensely grateful for it.
Because they protect me, they literally keep me alive, they guarantee the last bit of freedom left to me: my freedom of speech. The freedom to go somewhere and speak about my ideals, my ideas to make the Netherlands – our country – stronger and safer. After twelve years without freedom, after having lived for safety reasons, together with my wife, in barracks, prisons and safe-houses, I know what lack of freedom means.

And he concluded with these stirring words:

Our ancestors fought for freedom and democracy. They suffered, many gave their lives. We owe our freedoms and the rule of law to these heroes. But the most important freedom, the cornerstone of our democracy, is freedom of speech. The freedom to think what you want and to say what you think.
If we lose that freedom, we lose everything. Then, the Netherlands cease to exist; then the efforts of all those who suffered and fought for us are useless. From the freedom fighters for our independence in the Golden Age to the resistance heroes in World War II. I ask you: Stand in their tradition. Stand for freedom of expression.
By asking for a conviction, the Public Prosecutor, as an accomplice of the established order, as a puppet of the government, asks to silence an opposition politician. And, hence, silence millions of Dutch. I tell you: The problems with Moroccans will not be solved this way, but will only increase.
For people will sooner be silent and say less because they are afraid of being called racist, because they are afraid of being sentenced. If I am convicted, then everyone who says anything about Moroccans will fear to be called a racist.
Mr. President, Members of the Court, I conclude.
A worldwide movement is emerging that puts an end to the politically correct doctrines of the elites and the media that are subordinate to them.
That has been proven by Brexit.
That has been proven by the US elections.
That is about to be proven in Austria and Italy.
That will be proven next year in France, Germany, and The Netherlands.
The course of things is about to take a different turn. Citizens no longer tolerate it.
And I tell you, the battle of the elite against the people will be won by the people. Here, too, you will not be able to stop this, but rather accelerate it. We will win, the Dutch people will win, and it will be remembered well who was on the right side of history.
Common sense will prevail over politically correct arrogance. Because everywhere in the West, we are witnessing the same phenomenon.
The voice of freedom cannot be imprisoned; it rings like a bell. Everywhere, ever more people are saying what they think. They do not want to lose their land, they do not want to lose their freedom.
They demand politicians who take them seriously, who listen to them, who speak on their behalf. It is a genuine democratic revolt. The wind of change and renewal blows everywhere. Including here, in the Netherlands.
As I said:
I am standing here on behalf of millions of Dutch citizens.
I do not speak just on behalf of myself.
My voice is the voice of many.
And, so, I ask you, not only on behalf of myself, but in the name of all those Dutch citizens:
Acquit me! Acquit us!

We need to keep Wilders in our prayers. He is exactly right about freedom being on trial here. If he loses, freedom loses. So we must support him in every way that we can. And we need to ask ourselves if we too are willing to pay the price – indeed, willing to lose everything – for the sake of freedom. Are we?

28 Replies to “Islam, the West, and Geert Wilders”