Sharia law has no place in democratic societies. Its principles are anathema to freedom, the rule of law, and genuine pluralism. Yet plenty of folks are seeking to bring sharia law into the West. Thankfully there are those who are aware of the dangers of creeping sharia and stealth jihad, and they are fighting back.

This past week we have had five courageous women speaking out against Islam. Let me examine each one. A week ago on the ever-leftist Q&A, Tasmanian senator Jacqui Lambie tangled with sharia apologist Yassmin Abdel-Magied. It was a feisty encounter, and you can see a short clip of it here: www.theguardian.com/global/video/2017/feb/14/jacqui-lambie-and-yassmin-abdel-magied-clash-over-sharia-law-and-islam-on-qa-video 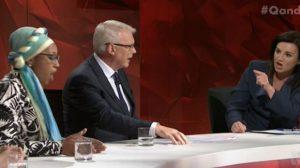 Lambie was quite right to say those who want to see sharia law established here should be deported. For that sensible comment all hell broke out, and that debate is still being discussed. Three female commentators have leapt to the defence of Lambie, and taken on the Muslim activist Abdel-Magied.

Of course others have challenged the Muslim apologist, but these three women deserve some credit, so I will focus on them. The first champion worth mentioning is Jennifer Oriel. She begins her important piece this way:

Australia does not welcome sharia law. It violates the Australian Constitution. It would send Western civilisation back to the Dark Ages. It chains freethinking women to a set of absurd laws derived from the misogynistic prophet, Mohammed.
It denies the right to criticise Mohammed’s half-witted notions because freedom of speech is only permitted in accordance with Islamic law. Islamism is a woman-hating, freedom-negating ideology whose most barbaric principles are codified in sharia law.

Australians do not need to understand sharia. We are a secular liberal democracy with a 61 per cent Christian population. In the 2011 census, 22 per cent of Australians selected “no religion”. Muslims constitute 2 per cent of the population. If you want to understand Australian law, read the Constitution. If you want to understand Australian values, read the founding fathers. If you want to understand Australian faith, read the Christian Bible, Enlightenment thought, or both.
Abdel-Magied also claimed that Islam is the world’s “most feminist religion”. Feminists need Islam like the Enlightenment needs the Dark Ages. Witness Mohammed on women: “I have not seen anyone more deficient in intelligence and religion than you.” What evidence did Mohammed provide to support his belief that women are stupid? They might be ungrateful to their husbands or curse at them. Many Koranic verses celebrate hatred of women: “Men have authority over women because God has made one superior to the other … Good women are obedient … as for those from whom you fear disobedience … beat them.” Islamic State celebrates its preferred Koranic verses, including that wellspring of feminism: “Marry … any slave girls you may own.”
Ah, yes, female sexual slavery — just smell the freedom, women….
Australians are tired of being called racist for defending our most essential values while the government throws public money at an activist media that undermines them. We are forced to pay for the ABC to ridicule patriots, smear conservatives and spin secure border policy as xenophobic. How much anti-Australian propaganda will we be forced to endure during SBS’s #FU2Racism programming next week?

A second champion is Rita Panahi. She began her piece as follows:

Last week I had the surreal experience of being scolded by an ABC host for not being sufficiently supportive of an Islamic activist advocating for sharia law. ABC radio drive host Rafael Epstein had the gall to admonish me, a migrant who escaped a country under Islamic law, for not supporting an advocate of Islamic law. It’s akin to a freed slave being criticised for a fear of slavery and reluctance to support slavery advocates.
Can you imagine the indignation from feminists if a privileged, white, private school-educated, heterosexual, conservative male was castigating an immigrant woman of colour about how their experience and opinions “distort the debate”?

The evils perpetrated against women, children, homosexuals, nonbelievers and many other minorities in the name of sharia are not limited to the backward savagery of IS. There are 10 countries, some of them sitting on the United Nations Human Rights Commission, where homosexuality can be punishable by death. These aren’t terrorists throwing allegedly gay men off buildings; they are governments of Islamic nations such as Saudi Arabia, Iran, Sudan and Yemen.
Some have penal codes that stipulate prison or flogging for “immoral” acts such as homosexuality, sorcery or sex outside of marriage but under sharia law practised in some regions, those found guilty can be sentenced to death. It is under sharia law that women are stoned to death for adultery and apostates are killed. Even in its softest forms, sharia or Islamic law is anti-women as we’ve seen in the UK’s sharia councils.
It’s with good reasons that the European Court of Human Rights has twice ruled sharia “incompatible with the fundamental principles of democracy”, finding it “difficult to declare one’s respect for democracy and human rights while at the same time supporting a regime based on sharia”. That’s because under sharia law, men and women are not treated equally, nor are Muslims and non-Muslims. Any belief system that defines apostasy as a crime is not fit for consideration in a civilised nation and taxpayer dollars should never again be wasted on its advocates.

My third heroine deals with this taxpayer-funding of sharia apologists. Miranda Devine said this:

When quizzed in the Senate by One Nation’s Malcolm Roberts last week, Senator George Brandis didn’t even have the grace to be embarrassed by the Department of Foreign Affairs and Trade’s funding of such questionable “public diplomacy” excursions.
“I can advise you that Yassmin Abdel Magied visited a number of countries in the Middle East to promote Australia as an open, tolerant and multicultural society… [Her trip] was funded from the public diplomacy budgets of middle east posts and cost an estimated $11,485 comprising travel allowance and flights… There was no personal fee or profit element to her.”
Why on earth would we want to present an alluring image of Australia to repressive Islamic regimes, where little girls are circumcised, women are stoned for adultery, gay people are executed, and where our idea of “an open tolerant” society is decried as Western decadence?

She finishes her piece this way:

Being a tolerant society does not mean we have to defend intolerant attitudes of sharia, particularly the inequality of women, which is evident in promotional posters for an Islamic conference in Melbourne in which the faces of male speakers were shown but the faces of female speakers were blacked out. Or the Victoria Police recruitment poster promising gender segregated information seminars.
Lambie’s style might be abrasive but it’s not Islamophobic to insist that everyone in this country should abide by Australian law. Nor is it Islamophobic to question why someone who misrepresents the true nature of Sharia would end up at the tender age of 25 being the beneficiary of not one but two taxpayer funded junkets, the first being a trip to the ASEAN “emerging leaders” program in Malaysia in 2012.
A lot of Muslims in Australia have escaped from repressive cruel Islamist regimes. It’s not in their interests for Sharia apologists to be promoted by the government and the taxpayer funded ABC as the face of moderate Islam.

Our last heroine is Ayaan Hirsi Ali, the heroic Somalia-born freedom fighter who dares to take on sharia law and political Islam. She will be speaking in Australia in April, yet the leftist Age over the weekend had the nerve to ask this question: “Her views are just as controversial as her Dutch political colleague Geert Wilders, so why is no one protesting about Ayaan Hirsi Ali’s coming visit to Australia?”

Mindboggling. Protest someone who has given all to help keep the West free of sharia law and its horrific treatment of women, including honour killings and female genital mutilation? Leave it to the Fairfax press to come up with this sort of nonsense.

Sorry, but I will take these five female freedom fighters any day over the dhimmi dunces who inhabit so much of our media, academia and politics.