Here are some truths you can bank on:

We see this occurring every day. It is infuriating of course. The real mind-bender is the near universal silence of the leftists and the feminists whenever these cases of Islamic misogyny and sexism take place. Indeed, they will almost always defend Islam at all costs instead of denouncing it.

In my books this is no different than Jews defending the Nazis, blacks defending the Ku Klux Klan, or the Untouchables defending the caste system. The term here is dhimmitude. Most Western elites, leaders, media personnel, and academics have become second class citizens – dhimmis – in submission to Islam. It is the Stockholm Syndrome on steroids.

Examples are off the charts, and a daily supply of fresh horror stories seems ever on offer. Let us consider just a few recent examples of this taking place in Australia. 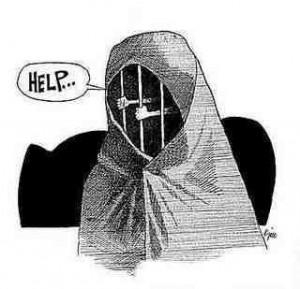 Consider this shocker of a news item from two weeks ago, discussing a forthcoming Islamic conference to be held in Melbourne March 11-12:

The Australian Islamic Peace Conference posted the pamphlet on Facebook last week with the leaders who are set to speak at the event next month. But three female speakers — psychologist Monique Toohey, social worker Nina Trad Azam and Islamic teacher Umm Jamaal ud-Din — had their faces replaced with black ink. The faces of all other 12 male speakers are displayed.
Organisers have been slammed on social media with one user posting: “I came across the flyer earlier and was shocked. I couldn’t articulate myself or write something about it. Seeing sister Monique’s name made me sure that it’s not their choice and also made me feel sick”.

Folks, this is Islam. Nothing more needs to be said. It is the same misogyny we have seen repeatedly. Remember the Islamic conference held at the University of Western Sydney’s Parramatta campus in May 2015 in which men and women were segregated, with the women forced to sit at the rear of the hall? I discussed this at the time here: billmuehlenberg.com/2015/05/16/the-death-of-western-universities/

My second example from a few days ago is no better. Consider this from NSW:

A public school in Sydney’s west has adopted a policy permitting Muslim male students to decline to shake hands with females, despite the practice having been denounced by many senior Islamic figures. The Hurstville Boys Campus of Georges River College in Sydney recently hosted an awards ceremony at which female presenters, including several accomplished and respected members of the local community, were told by one of the school’s two principals that some students would not shake their hands because of their Muslim faith.
The instruction is understood to derive from an Islamic hadith — a report describing the words, actions, or habits of the Islamic prophet Mohammed — stating that “it is better to be stabbed in the head with an iron needle than to touch the hand of a woman who is not permissible to you”. The NSW Education Department has confirmed the school had an “agreed protocol” regarding handshaking and Muslim students.

Wow. This is creeping sharia pure and simple, and a slap in the face to every female in Australia. This is yet another clear example of how Islam views women. And all the usual suspects came out defending the school. Imagine the immediate uproar and shouts of discrimination, hatred and bigotry if a public school in Sydney’s west has adopted a policy permitting Christian students to decline to shake hands with non-Christians, or homosexuals, or aboriginals.

We all know that every lefty and every lefty media outlet would have been in an uproar about it. They would have demanded that this school be shut down or lose its funding, or that those responsible for it be expeled. But because it is Muslims doing the discrimination, it is just fine.

The only thing more shocking than this were various clueless Christians getting in on the act, defending the school. One fellow elsewhere said – incredibly – that we should not impose our Christian values on such a situation. Good grief. One does not need to be a Christian of course to be outraged at this sexist, misogynist reality in Islam.

This guy went on to claim that this is about religious freedom. Um no, this is about human rights: the basic rights of women to be treated with respect, dignity and equality. This is just so appalling on so many levels: it is another Australian institution bowing to Islam and succumbing to dhimmitude, as they readily allow women to be treated as second class citizens.

If my first two examples do not fully convince you, then this one must. One of Australia’s main Muslim “moderate” leaders has spilled the beans on Islam, women and violence in marriage. Consider this lulu from today’s press:

A senior Muslim leader has said using violence against women is a “last resort” for men. President of the Australian Federation of Islamic Councils Keysar Trad described beating women as “step three” in a process of dealing with issues in relationships, after counselling and buying chocolates or “taking her out on a dinner”.
The outspoken author and commentator made the remarks on conservative commentator Andrew Bolt’s Sky News program. Asking how Islam could be considered a “feminist religion”, Mr Bolt quoted a modern interpretation of the Koran.
“It is permissible for him to beat her lightly with his hands, avoiding her face and other sensitive areas,” he read. “Which is better than nothing, but mate, that’s a modern interpretation.” Mr Trad responded saying he had studied the verse in detail, and said it was all about “human psychology”.

You can see him actually saying this by clicking on the link below. The Muslim leader is of course now back-peddling because of the backlash he got, but what he told Andrew Bolt was entirely correct. Beating wives is fully permissible in Islam. See for example Sura 4:34 which says this:

“Men have authority over women because God has made the one superior to the other, and because they spend their wealth to maintain them. Good women are obedient. They guard their unseen parts because God has guarded them. As for those from whom you fear disobedience, admonish them and send them to beds apart and beat them. Then if they obey you, take no further action against them. Surely God is high, supreme.” (Dawood’s version)

But let me share one more translation from the various Korans I have just pulled off my shelves:

“Men are in charge of women, because Allah has made the one of them to excel the other, and because they spend of their property (for the support of women). So good women are the obedient, guarding in secret that which Allah has guarded. As for those from whom you fear rebellion, admonish them and banish them to beds apart, and scourge them. Then if they obey you, seek not a way against them. Lo! Allah is ever High Exalted, Great.” (Pickthall’s version)

Finally, by way of a nice wrap-up, the Somalia-born champion of freedom against Islamic tyranny and oppression has just the other day provided us with a handy listing of how women fare under sharia law. She writes:

As a moral and legal code, sharia law is among the most dehumanising, demeaning and degrading for women ever devised by man:
• Under sharia law, a woman’s testimony is worth half of a man’s testimony in court (Koran 2:282).
• Under sharia law, men are the “guardians” of women; women are to be obedient to men, and husbands may beat their wives for disobedience (Koran 4:34).
• Under sharia law, a woman may not refuse sexual access to her husband unless she is medically incapable or menstruating, a teaching based partly on Allah himself saying in the Koran, “Your women are a tillage for you; so come unto your tillage as you wish” (Koran 2:223)
• Under sharia law, a woman inherits less than a man, generally half as much, again based on holy writ: “Allah enjoins you concerning your children: the male shall have the equal of the portion of two females” (Koran 4.11, 4.12).
• Under sharia law, men and women who commit fornication are to be flogged. As to the punishment for fornicators, the Koran says: “Let not compassion move you in their case, in a matter prescribed by Allah, if ye believe in Allah and the Last Day: and let a party of the Believers witness their punishment” (Koran 24:2).
• Under sharia law, a man may unilaterally divorce his wife through talaq, whereas women are limited to divorce either under specific circumstances, such as the husband’s impotence, or with the husband’s consent and payment of a certain amount of money (khul).
• Sharia law permits fathers to contract binding marriages for their children so long as they are minors; and although a boy married against his wishes may exercise his power to divorce his wife unilaterally once he matures, a girl’s exit from such an unwanted marriage is much more difficult.
• Under sharia law, the custody of children is generally granted to fathers, and mothers lose custody if they remarry because their attention is supposed to go to their new husbands.
• Although majority-Muslim countries have in practice abolished slavery (Saudi Arabia did so mainly as a result of foreign pressure in 1962), slavery still has not been abolished in sharia law. Sexual slavery was common in Islamic history and is accepted by sharia law.

They are, as Lenin said about Western lefties in earlier times who defended communism at all costs, “useful idiots”. They are useful, but expendable. Once Islam gets into power, these dhimmis will be the first to go. But in the meantime, women suffer – big time.