The latest Islamic terror attack – this time at London Bridge – has in one sense sort of dampened what I was going to say here. But I will say it anyway. In the face of such blatant evil, it may seem that this is not the time to speak about the evils of the West.

So let me first preface my remarks before going any further. I for one hate the stupid claims of moral equivalence which the leftists – and some clueless Christians – routinely make: “Yeah, Islam has a few bad eggs, but the West is no better”. I think Islam is an evil political ideology which needs to be firmly resisted.

And I also think that at least in principle, things like freedom, democracy, rule of law and genuine pluralism are good things which are well worth defending and preserving. I of course am also aware that all these social goods largely only work when they remain on the foundation they were built on. And in the West that foundation was the Judeo-Christian worldview.

But as the West becomes increasingly secular, rejecting its Christian roots, all these goods become much harder to sustain. The American Founding Fathers repeatedly insisted on this; they knew that without a deep-rooted faith, the great American experiment could not last long.

All these points I have argued at length elsewhere, so I will leave it at that. So let me now return to the topic I originally wanted to write about. And that topic is, as my title suggests, the ultimate futility and folly of life without God, and the stark Judeo-Christian truths about the reality of sin and evil.

What sparked all this was – as is often the case with my articles – a confluence of two things happening at around the same time. The first was a quote I read which really stuck out, even though it was written in a somewhat different context. The second was a short glimpse of a television documentary.

The quote comes from a book which may seem to have little to do with this big picture theme that I am discussing here. But it actually does. It comes from James Packer’s excellent 1992 volume, Rediscovering Holiness. The copy I have is the revised 2009 edition put out by Regal.

In the opening chapter Packer speaks about the importance of holiness, and how it is related to our very humanity: “All members of our fallen race who, because they do not know Jesus Christ, still live under the power of that self-deifying, anti-God syndrome in our spiritual system which the Bible calls sin, are living lives that are qualitatively subhuman. Sin in our minds says otherwise, but in this, as always, sin is lying.”

But what he said next is what caught my attention. Of course it has been said often by others, but it is a nice summary of the reality of man without God, or, rather, man in enmity against God:

The twentieth century will doubtless go down in history as the century of secular humanism. It began with the euphoric, sin-spawned confidence that human endeavor in science, education, the harnessing of nature, and the increase of wealth would generate human happiness to the point of achieving something like heaven on earth. It ends, however, with none of these hopes realized, but with sickening memories of many great evils committed, and with hearts everywhere full of restless and gloomy unease regarding humanity’s future prospects and life’s present worth. 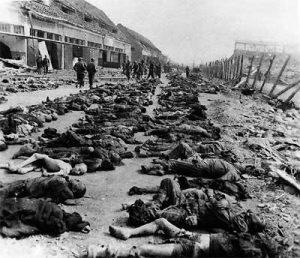 The documentary I briefly watched at the same time nicely confirmed all this. I happened upon a few documentaries on the National Geographic channel. I assume they are on regularly. But just watching a few minutes of them was gruesome enough.

We speak of man’s inhumanity toward man, and it was on full display during WWII. The docos focused on life in the German concentration camps – it was horrific indeed. Much can be said, but let me mention just one episode: the prisoners were picking the lice from their own bodies and eating them as a response to their starvation.

If these docos were almost too horrible to watch, imagine how horrible the reality was to have lived through. But one key point I wish to make here is that the demonic horrors of what the Germans and Japanese did in WWII were all very recent.

Historical perspective is crucial here. This happened a relatively short time ago – it did not happen in prehistoric times. This did not occur in the Dark Ages. It happened in civilised Europe, and elsewhere. Recall that the war ended just over 70 years ago. So all these despicable atrocities were happening only seven or eight short decades ago.

This is not part of our deep, dark past. This is recent history – very recent history. As Packer and others noted, last century was meant to be something utterly utopian as human progress made everything better and better. The secularists really believed that progress and perfection were right around the corner.

Well, a couple of world wars, the spectre of nuclear annihilation, the scourge of political Islam, to name but a few ominous developments, threw a real spanner into all that groundless optimism. This delusional belief in human progress and the perfectibility of man was blown out of the water last century.

And things are not looking any better this century. Human beings are capable of the most horrific evil. They always have been. We are not getting better and better. We remain the same: self-centred individuals who like to pretend we are not so bad.

There are two main points I want to emphasise here. The first is the biblical reality and realism about sin and evil. As Chesterton put it, “Certain new theologians dispute original sin, which is the only part of Christian theology which can really be proved.”

When a man is getting better he understands more and more clearly the evil that is still left in him. When a man is getting worse he understands his own badness less and less. A moderately bad man knows he is not very good: a thoroughly bad man thinks he is all right. This is common sense, really. You understand sleep when you are awake, not while you are sleeping. You can see mistakes in arithmetic when your mind is working properly: while you are making them you cannot see them. You can understand the nature of drunkenness when you are sober, not when you are drunk. Good people know about both good and evil: bad people do not know about either.

The second main point I want to stress is how very thin the veneer of civilisation is. We think we are such refined, clever and decent people. We really do think that we are good people. But we are not. Jeremiah had it right when he said “The heart is deceitful above all things and beyond cure. Who can understand it?” (Jer. 17:9).

And recall what German society was like when Hitler came to power. Germany in the 1930s was among the most cultured, polished, sophisticated and enlightened nations around. If any nation could claim to have progressed to a point of the ideal society, the Germans could have.

Yet for all their progress, refinement and culture, they handed us Hitler on a platter. They gave us the Nazis, the death camps, and the Holocaust. Of course I am not picking on Japan and Germany here. I am picking on fallen humanity. I am picking on every nation and every person without God.

Sinful man may have a veneer of civilisation but inside he is full of demonic evil. Alexander Solzhenitsyn also had to deal with one of the most evil, most cruel, and most demonic systems ever – godless communism. He too knew all about sin and evil as he lingered near death in the Soviet Gulag for eight years.

Yet even in the face of all this diabolical evil, he rightly understood, as a Christian, what the real story was. He knew where real evil comes from. It is not just in certain nations or in certain political ideologies or in certain worldviews. Said Solzhenitsyn in The Gulag Archipelago:

If only there were evil people somewhere insidiously committing evil deeds, and it were necessary only to separate them from the rest of us and destroy them. But the line dividing good and evil cuts through the heart of every human being. And who is willing to destroy a piece of his own heart?

It was only when I lay there on rotting prison straw that I sensed within myself the first stirrings of good. Gradually it was disclosed to me that the line separating good and evil passes not through states, nor between classes, nor between political parties either, but right through every human heart, and through all human hearts. This line shifts. Inside us, it oscillates with the years. Even within hearts overwhelmed by evil, one small bridgehead of good is retained; and even in the best of all hearts, there remains a small corner of evil.

Yep, ultimately evil lies in every single human heart, and the only way to deal with it is to get a new heart. A heart transplant is what is needed, and that is what the gospel message offers. God cleans us up on the inside, takes away our heart of stone, and gives us a heart of flesh.

Those who come to Christ in faith and repentance get to participate in this great exchange. But barring that, no amount of civilisation, no amount of progress, and no amount of self-effort will reduce evil in the world – or in ourselves – and make things better. We need to learn from history here.

The German and Japanese horrors took place not that long ago. And we in the West are fully capable of repeating all this evil. Our hope does not lie within. It comes from without. God offers the change we need. Whether we accept that or not is up to us.

8 Replies to “Evil, and Humanity Without God”