We have all seen it and experienced it: people who claim to be Christians who attack and criticise other Christians, all the while defending and promoting manifestly anti-Christian ideas, practices, organisations, agendas and individuals. They will actually side with the Christophobes and misotheists while attacking fellow believers.

It is really appalling to see this happening so often. I find it occurring all the time sadly. I just scratch my head and ask myself, “Just whose side are you on?” How can they claim to be believers yet side with all the non-believers on so many crucial issues?

Just what gives here? How are we to account for this? There would be various reasons for this I suppose. Some believers are well-meaning but just rather clueless. They may have good intentions, but they may be inclined simply to emote rather than think clearly, do a bit of study, and actually use some God-given discernment. 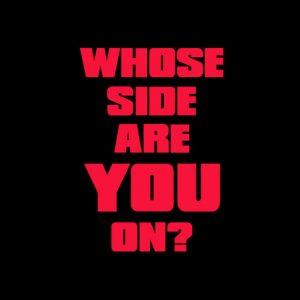 I guess we can give such folks a bit of slack, pray for them, and try to encourage them to be a bit more informed, a bit more discerning, and a bit more biblical. But other folks who claim to be Christians who slam other believers while siding with anti-Christian agendas and outfits are another kettle of fish.

When they actually strongly side with clearly unbiblical and anti-Christian activities and agendas, then we can rightly ask what sort of Christians they in fact are. Are they real deal believers, or are they just claiming to be? As always, only God knows ultimately and fully those who are truly his.

But we are told in Scripture that we can know people by their fruit, by what they do, and by what they believe. So we can at least get some rough ideas about where folks are at, while still leaving the final judgment up to God. And when folks push rather obvious anti-Christian stuff, that may be the time to ask, “What gives?”

I write all this because of yet another example of this very thing happening. Over the past few days all sorts of Christians have come out to defend the indefensible. I refer to the latest example of outrageous and despicable ABC anti-Christian bigotry.

Yesterday I wrote a piece on a really nasty and bigoted hit piece by Julia Baird and the ABC. It claimed evangelical Christians were at the forefront of domestic abuse. The really shocking thing is the patently bogus “research” used. The only piece cited in fact states upon closer inspection the exact opposite – as does plenty of other research!

But you can read all about this deplorable hit piece and its blatant lies and distortions in this article. Have a read of it to get the full background on this matter: billmuehlenberg.com/2017/07/20/christophobic-abc-strikes/

However, as mentioned, there has been a steady stream of believers attacking me and others who carefully assessed this fake news piece, while defending to the hilt Baird and the ABC. I kid you not! To be really honest here, I am not sure which is worse: the wretched ABC for yet another bit of Christophobia and pseudo news, or those Christians who have rushed to defend Baird and the ABC.

We all fully expect the secular left ABC to run with this rubbish, but what is surprising is when people claiming to be Christians will side with the ABC against other Christians. That is just mind-boggling in my books. As I say, some of these folks are just rather clueless and uneducated.

But some of these folks are lefty trendies who seem to use Christianity to push their hard-left agendas. And some in fact are just wolves in sheep’s clothing. So we have a real mix here: some are just not too bright and discerning; some are just really misguided, even deceived, Christians, who really need to get back to the Bible; and some are utter fakes and frauds intent on destroying the church.

I have spent the past day or so dealing with many of these folks. It gets rather depressing to encounter so many who seem to think the ABC offers gospel truth while they attack us for pointing out a few inconvenient truths. Plenty of examples could be mentioned here, but let me close with just one case in point.

One fellow claimed I was out of line to dare question Baird and the ABC. He kept defending both over and over again, no matter what I said. He really thought the Baird piece was fair and balanced, and that there was no need to hear stories from the other side of the debate. My last reply to him went something like this:

Let me one last time try to make it really simple for you: If, say, the ABC wrote an article on you, attacking you, and it quoted only three people in the story – all of whom were disgruntled friends of yours who maligned your character, slammed you, and told porkies about you – but did not bother to mention just one of your real friends who could vouch for your good character and give a much different perspective on things, how would you feel about that? Would you defend that article to the death and call it balanced and fair journalism? Would you insist that both sides of the story do NOT need to be presented there?

Let me answer that for you: of course you wouldn’t – you would be the first to loudly protest this unjust, imbalanced, and completely prejudiced attack piece – even more so if you knew you were subsidising such bigoted beat-ups with your own tax dollars.

That is exactly what we have in this piece. It is the very same thing. Baird and the ABC ran with all the emotive and sad stories they could come up with (and such stories as I already said are sad indeed, and no one should support such violence and abuse), but ignored the stories which present a different picture. It was a deliberately biased and one-sided piece through the selective use of stories. That has nothing to do with balanced and fair reporting, and everything to do with pushing their relentless anti-Christian agenda.

But you continue to massively miss the point here: even if they did offer one or two stories to the contrary, that is not the main problem here. This is the real issue, so please try to read carefully: Baird distorted the evidence massively. The actual evidence (even from the source she quoted from) says the exact opposite of what she and the ABC ran with.

So either they deliberately presented this false and misleading information, or they did it because they are lousy and unqualified reporters and news networks. In either case, they are to be condemned for such appalling unprofessionalism, incompetence, bias and bigotry. They should offer an apology and vow to get their act together. They certainly should not be defended to the hilt as some Christians are doing.

It seems that last remark to him made little difference. In fact he simply dug his heels in even deeper, totally ignored the evidence, and would not even deal with what I wrote! Oh well. A quick look at his page makes it rather clear that I will not easily be able to reach him on such matters. But at least others might gain something from such debates, which is why I again revisit this whole discussion.

I fully expect the ABC to continue to push lies, misinformation, politically correct nonsense, and anti-Christian bigotry. What I do not expect, and will never come to expect, is for Christians to come to the defence of all this. Just whose side are you on anyway?

23 Replies to “Whose Side Are You On Anyway?”