The West is filled with clueless wonders who tell us repeatedly and adamantly that Islam is not a threat, it is a religion of peace, and the only real problem we face is “Islamophobia”. How many times have we heard Western leaders, politicians and “experts” rehash this mantra? 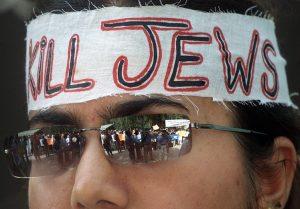 It is the only accepted public line one is allowed to take on this issue. One dare not say that Islam IS in fact a problem, that it is a direct threat to Western values and principles, and unless we wake up to this reality we may well lose it all. But those who dare to state the obvious are treated as the enemy.

Some of us will keep proclaiming the truth on this matter regardless of those who want to live in la la land. Things are far too important to allow those living in delusion to control the narrative here. And the funny thing is, reality has a way of breaking through, shattering the deception and forcing us to face the facts even if we do not want to.

An obvious case in point of all this has made the news headlines for the past few days. A proposal to build a synagogue in Sydney has been rejected. Why? Because of fears it would become a target of the Islamists! Wait, run that by me again!

Those who have shouted the loudest that Islam is no threat to our way of life are now actually telling us we cannot build a synagogue because it might result in Islam, er, becoming a threat! The mind reels. But let me first offer a few more details of this shocker of a story. One report states:

A local council has banned the construction of a synagogue in Bondi because it could be a terrorist target, in a shock move that religious leaders say has caved in to Islamic extremism and created a dangerous precedent. The decision, which has rocked the longstanding Jewish community in the iconic suburb, was upheld in court this week as the nation reeled from the alleged airline terror threat and debate raged over increased security measures at airports and other public places.
The Land and Environment Court backed the decision by Waverley Council to prohibit the construction of the synagogue in Wellington St, Bondi — just a few hundred metres from Australia’s most famous beach — because it was too much of a security risk for users and local residents.
Jewish leaders are shocked the decision appears to suggest they cannot freely practice their religion because they are the target of hate by Islamist extremists — and that the council has used their own risk assessment of the threat posed by IS against it. The head of the local Jewish community said the council and the court had effectively stifled freedom of religion and rewarded terrorism.
“The decision is unprecedented,” Rabbi Yehoram Ulman told news.com.au. “Its implications are enormous. It basically implies that no Jewish organisation should be allowed to exist in residential areas. It stands to stifle Jewish existence and activity in Sydney and indeed, by creating a precedent, the whole of Australia, and by extension rewarding terrorism.”
NSW Jewish Board of Deputies chief executive Vic Alhadeff told news.com.au he had never heard of any other religious group being denied a place of worship just because they were targeted by outside extremists and that the move was a dangerous precedent.
“It’s a very sad day for Australia if an established community, which needs a house of worship, is refused permission to build it because of fear that others may pose a threat,” he said. “This simply shows how we’re all losing our freedoms. Those who want us to be afraid are winning, and this ill-conceived judgment represents a dangerous precedent.”…
Rabbi Ulman said the decision “came as surprise and shock to the entire Jewish community” but was even more scathing about the council, warning it had threatened the future of Jewish life in Australia. “By pulling the terror threat argument they have shown that they are completely out of touch both with the reality and with needs of their constituency,” he told news.com.au. “They have effectively placed in jeopardy the future of Jewish life in Australia.”

Yes I am just as shocked by this as these Jewish leaders are. So what we have going on here is really two things: One, this is in fact an admission that we have a problem with Islam! The very thing so many of us have been saying for so long is now being tacitly admitted to.

The second point is this: instead of doing the obvious (deal with dangerous Islam) they are caving in, and targetting the victims of dangerous Islam. Um, our Jewish friends are the good guys here! But the powers that be are penalising them, while letting militant Islam go unchecked.

This makes as much sense as siding with rapists over against their victims, and demanding that all women never leave their homes. It is punishing potential rape victims while doing nothing about potential rapists! But of course in many Muslim-majority countries that is just what we find happening: rape victims are further punished while nothing is done about the rapists!

This is such a despicable act of cowardice and capitulation that even the overseas press, including the Washington Post, is running with this story. What an incredibly mixed up world we live in, where we penalise the victim and make excuses for those targeting the victims.

Indeed, the moral of the story is quite simple: because devout Muslims so dislike Jews and Christians, the way forward to a peaceful and harmonious society is to ban the building of all synagogues and churches, so as to keep Muslims happy. Better yet, either tear them down, or convert them into mosques.

After all, we need to do our bit for interfaith harmony and religious unity. I guess this is as good a way as any of achieving this. This is why we keep losing. Spineless councillors siding with Muslims and against Jewish victims is all about surrender, appeasement, and dhimmitude.

22 Replies to “Islamophiles Prove Our Point”