The God we serve is a God of reality, of truth, and of rationality. Thus it is not surprising that as men shake their fists at their Creator and pretend he does not exist, they increasingly move into a world of unreality, lies and irrationality. They become incapable of thinking straight, and their feet become firmly planted in mid-air.

You can’t really reason with these people. You cannot present them with facts, evidence and data. Their minds are so messed up – because their hearts are so darkened – that they are unable to live in the real world and deal with logic, fact and rational thought.

And the Bible makes it clear that this is exactly what happens to those who embrace sin and evil, all the while rejecting God. Their whole person grows more and more dark, unstable, and radically bent out of shape. The entire sexual revolution is one huge example of this very thing.

The lies and deception of the homosexual revolution has spawned even more grotesque and utterly bizarre manifestations, such as the transgender revolution. Here we have people simply denying reality and biology altogether. They simply decide to identify as whatever they want, and pretend this is somehow normal and real.

Thus a man can simply decide that he identifies as a woman, and start living that way the rest of his life – or until he next changes his mind. Never mind that every single cell in his body screams out the truth that he is male. Now we simply choose to be whatever we want to be.

Reality, truth, logic, reason and common sense have all been jettisoned as we celebrate living in la la land, and we make a virtue out of playing make believe. Children always did this of course, but we always expected that they would eventually grow up, grow out of it, and start living in the real world. 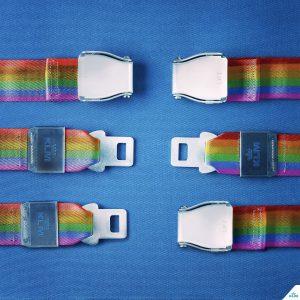 Now we insist that everyone permanently lives in a state of make believe, of unreality, and irrationality. And the only bad guys left are those who still happen to think that truth and reality actually mean something, and that it is best to seek to know the truth and conform to reality.

But that just makes us intolerant, bigoted, and haters! Go figure. But as I said, Scripture has already told us about how all this works. And Romans 1:18-32 is a key text on all this. It is one of the most important sections of Scripture, especially as it addresses the nature of fallen man.

But it is not just about fallen man, but man in outright, defiant rebellion against God. It is all about the man (or woman) so soaked in sin and immorality that as they shake their fists at God, they actually think they are somehow being sensible. But they are nothing of the sort.

As Romans 1:21-22 puts it: “For although they knew God, they neither glorified him as God nor gave thanks to him, but their thinking became futile and their foolish hearts were darkened. Although they claimed to be wise, they became fools.”

And if that is not plain enough, it goes on to say this in verse 28: “Furthermore, just as they did not think it worthwhile to retain the knowledge of God, so God gave them over to a depraved mind, so that they do what ought not to be done.”

When your heart and soul is pitch black with sin and selfishness, the mind turns to mush. Sinners simply can no longer think straight, and they will call lies truth, and truth lies. It is just as Isaiah warned us about: “Woe to those who call evil good and good evil, who put darkness for light and light for darkness, who put bitter for sweet and sweet for bitter” (Isaiah 5:20).

And let me make one more point about these 15 verses. As Paul discusses human rebellion, sin and moral culpability, he actually singles out one sin – one sin that is so utterly representative and indicative of this depraved mind and darkened heart: the sin of homosexuality.

I say all this as an extended introduction to something I just saw and must comment on. I refer to a recent tweet making the rounds by a major airline. Those who made it likely thought they were being so cute and clever to push this, but it simply backfired on them big time. It completely and utterly unmakes their case.

I refer to KLM, the Dutch national airline, and its ongoing push to ram homosexuality down the throats of everyone, whether they like it or not. But the folks at KLM are obviously not all that bright, as the image they have used completely undermines their entire case. Underneath it has these words: “It doesn’t matter who you click with. Happy #PrideAmsterdam”.

It proves the very opposite of what they intended. It features three sets of seat belts, all in rainbow colours. As the accompanying pic shows, only one is an actual working set of seatbelts that any intelligent flyer would use. The other two are completely useless, and no one in their right mind would ever consider flying with an airline that was that idiotic to actually offer such a useless set of seatbelts.

Morevoer, why is KLM being so sexist, racist, bigoted, hate-filled and heteronormative? Does it not know that there are way more than two types of seatbelts? Some say there are at least 67 different kinds. Some say hundreds. Others insist that the sky is the limit.

Thus I quite love this image, because it not only fully demonstrates the truth of what Paul told us in Romans 1, but it entirely shatters the case for homosexual marriage. Um no, two men do not and cannot make marriage. Nor can two women. It is the complementary nature of the male/female union, with the possibility of procreation, that makes marriage what it is, and always has been.

As I said, who would ever consider flying with an airline that had two male or two female ends to their seatbelts? No one would, and everyone could tell you why in an instant. KLM might as well have tried to reassure the public that this is all peachy by featuring planes with only two left wings, or two right wings.

And until recently everyone knew that marriage must have one man and one woman. But as I said, as we continue to rebel against our Creator, and delight in sin and selfishness, our thinking goes to pot and our ability to live with reality goes out the window.

No wonder the Bible talks so much about fools. It is one of the most used words in the Bible. The biblical understanding of a fool is not just someone who is not very bright, but someone who is at odds with the God of the universe, thus their whole life is bent out of shape.

Being a fool is as much a moral and spiritual issue as it is a mental one. And as men and women reject their Creator and his good plans for them, they are left to only one outcome: “they became fools”. The folks at KLM are simply one clear indication and example of all this.

But thanks for making our case KLM. It actually DOES matter who you click with.