Concerned cop: Thanks dispatch. So who are we talking about here” Perhaps a young male Caucasian – maybe in his mid-twenties, maybe with gang-related tattoos covering his body?

Dispatch: You lousy, intolerant bigot! How dare you even ask such narrow-minded, racist, sexist, ageist, transphobic questions. This is the new, improved PC police. We no longer judge people by their race or age or gender or gender preference or anything else. We are not so narrow-minded and discriminatory. We are inclusive now.

Concerned cop. Oh, well, thanks. I guess that narrows my search down to some 24 million Australians. 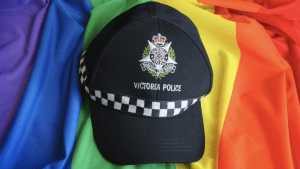 Dispatch: You bigot. How dare you assume it was an Australian?!

While the above is a fictional account of things, it is now sadly very near to the truth. Long ago already many police forces and other security personnel abandoned the idea of identifying someone by his race. That is known as “racial profiling” and it is not politically correct. It is a real no-no nowadays.

I kid you not. Consider this piece from a homosexual website:

Victoria Police is set to officially add a third gender option for non-binary people in its internal database. The police force is looking into alternative ways to record gender in addition to its current categories of male, female and unknown, according to The Australian.
The database could be updated to allow a non-binary category for people who don’t identify as either. Government agencies have been pushed to comply with new guidelines on the recognition of sex and gender, and lobbying from the LGBTI community has contributed to the proposed change.
“A piece of work is currently being undertaken to scope alternative models for capturing and recording gender in a more inclusive way,” said a Victoria Police spokesperson. “Relevant consultation with members of the LGBTI community has and will continue to inform this piece of work.” Senior police members recently met with the Victorian government’s LGBTI Justice Working Group to discuss the project.
“A word like ‘unknown’ is really at odds with what a person knows to be the case about themselves,” said Harriet Shing, joint chair of the working group. “Having a system that reflects people’s identity is about inclusiveness but fundamentally it’s about dignity and recognition.”

Um, it is fundamentally about the police becoming complete dolts, and allowing criminals to get away with murder. Good grief – what next? Will the police no longer be allowed to even describe what crime took place, for fear of offending someone?

Why not just lay down your weapons, close the stations, and shut down the courts? After all, we do not want the poor criminals to feel bad. We do not want to make them think less of themselves. We just want to be inclusive and we just love on everybody.

But of course this whole gender bender agenda is a complete fraud anyway. Simply deciding one day you are male and one day you are female is a joke. Why in the world are our police departments falling for this delusion? If you are that open to delusion and deception, you are going to be lousy at stopping crime.

And when I stand before a judge on a charge of assaulting a police officer, I will simply tell His Honour that I am in fact a policeman. All that makes as much sense as pretending people can now somehow transcend mere gender, biology, mere DNA, and mere reality. For heaven’s sakes, get a grip. Life is messed up enough without our police aiding and abetting this mass confusion.

I expect meatheads and moonbeams to deny reality, go troppo, and start accepting all the ludicrous PC agenda items out there. And we expect children to delight in fantasy and make believe. They exult in living in worlds created by their own imaginations.

But we do not expect our police services to do the same. But with the military already placating the transgender activists, this was bound to happen. I am just afraid to find what will come next. I don’t think it will look too good, whatever it will be.

Um, I identify as a normal, rational human being – stop the world, I want to get off.

12 Replies to “I Identify as Unidentifiable”