If I wait two years and one month, I can pen a piece on the 30th anniversary of the fall of the Berlin Wall. But I don’t want to wait that long so let me discuss it here and now. I wish to highlight this massively important event for several reasons:

-because knowledge of history is so very important and most folks today know little at all about it
-because communism was one of the world’s greatest evils, yet so many know so little about this as well
-because things like freedom really do matter, and we can so easily lose our freedoms when we are ignorant of history
-because sometimes just a handful of heroes can change the course of human history

Freedom is always a few steps away from disappearing under tyranny, so we must keep reminding ourselves of why it is important, how easily we can lose it, and how we can seek to maintain it or regain it. Studying the history of the past century is an important means by which we can get a sound handle on all this. 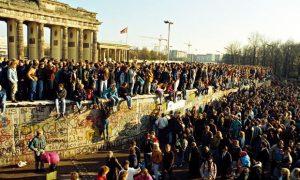 The fall of the Berlin Wall, and the end of the Cold War, may seem like ancient history to some, but for us older folks, it is still a relatively fresh memory – we lived through it, at least from a distance. I still remember where I was when this took place.

So let me do a whirlwind tour of history from the past 100 years. And it begins with something which this year is indeed an exact anniversary of: in 1917 the Bolshevik Revolution saw the end of the Russian Tsars and the implementation of Soviet communism. Tyranny, bloodshed and oppression followed.

The Second World War interrupted things a bit, with the Soviets and the Allies fighting Hitler and the Nazis. When the war finished in 1945, the occupying forces in Germany decided to split the capital Berlin (which was in Soviet-controlled East Germany) into four parts: The Soviets took the eastern portion of the city while the US, Britain and France had the West.

As is always the case when communism takes charge, the east became yet another economic basket case and hell hole, with empty shops and a grey, dead culture. So East Berliners did what freedom- and prosperity-loving people always do – they voted with their feet and left in droves for the West.

By July of 1961, 1000 refugees a day were fleeing to West Berlin. This was a real problem for the communists – and an embarrassing one. The Marxist states were supposed to be people’s paradises! But they always ended up being impoverished, hellish, slave camps. The PR problem alone had to be dealt with.

So the communists did what they always have done: they crushed the people’s freedom and started to erect some walls to keep the people in. East Germany (the German Democratic Republic) started erecting the wall in August of 1961.

For three decades Berlin was a divided city, and the physical wall represented the very real wall that existed between a free, democratic and prosperous West, and the totalitarian nightmare of communism. Indeed, the best way to smash the moral equivalency fallacy about the West versus communism is to see what the states and the people do.

In communist countries the authorities have to build walls to keep the people in. But given half a chance, freedom seekers will always flee to the West. You never saw masses of people trying to get into East Germany, or the Soviet Union, or communist Cuba.

Since I did write an article about the 25th anniversary of its fall, let me share a few paragraphs from that piece:

First erected in 1961 to prevent those in the East free passage to the West, it was a very visible and very ugly symbol of Communist totalitarianism. This was certainly seen as a necessary move by the East since between 1945 and 1961 more than 3 million East Germans escaped to West Germany.
On August 13 a perimeter was set up, eventually becoming a permanent set of barriers. On August 24 the first person was shot while trying to cross from East to West. For the next 25 years plenty of attempts at escape were undertaken. It is estimated that some 5,000 people escaped through the Berlin Wall, out of around 10,000 who tried.

It was in 1963 that the US President John F. Kennedy gave his famous “Ich bin ein Berliner” speech in West Berlin. But much more important was the June 12, 1987 speech given by Ronald Reagan at the Brandenburg Gate near the Berlin Wall. The closing words of that wonderful speech were these:

We welcome change and openness; for we believe that freedom and security go together, that the advance of human liberty — the advance of human liberty can only strengthen the cause of world peace.
There is one sign the Soviets can make that would be unmistakable, that would advance dramatically the cause of freedom and peace.
General Secretary Gorbachev, if you seek peace, if you seek prosperity for the Soviet Union and Eastern Europe, if you seek liberalization: Come here to this gate.
Mr. Gorbachev, open this gate.
Mr. Gorbachev – Mr. Gorbachev, tear down this wall!

You can view the entire speech here: www.youtube.com/watch?v=5MDFX-dNtsM

And the rest, as they say, is history. In 1989 various people power revolutions broke out in Soviet Bloc nations such as Poland and Hungary. Mass protests in Berlin started to erupt as well, and on November 9 government officials finally caved in, opening the wall.

The scenes of overwhelming joy, euphoria, tears and celebration will not be forgotten. Many still have their souvenirs from the wall sitting on their desktops today, reminding them of this momentous event. It was one of the twentieth century’s most remarkable victories. See this news report from that time: www.youtube.com/watch?v=snsdDb7KDkg

Demolition of the wall formally began on June 13, 1990, and it was completed in 1992. German reunification took place on October 3, 1990. People power; the love of freedom; and the hatred of tyranny; combined with the providential presence of three remarkable leaders at the time – Reagan, Thatcher and Pope Paul II – helped to bring about one of the most remarkable turnarounds in recent history.

Simply thinking of these heady days – and watching videos of it – still brings tears to my eyes. It gives me hope for the future. As the days continue to grow dark, history is not inevitable. Things can change. And often God will raise up a handful of heroes to help make it happen.

We certainly need such heroes today. Let me conclude by reminding you of one small vignette from this turbulent period. Rock star David Bowie was living in West Berlin at the time. In 1977 his hit song “Heroes” was released. Wikipedia gives this brief background to it:

Inspired by the sight of Bowie’s producer/engineer Tony Visconti embracing his girlfriend by the Berlin Wall, the song tells the story of two lovers, one from East and one from West Berlin. Bowie’s performance of “Heroes” on June 6, 1987 at the German Reichstag in West Berlin was considered a catalyst to the eventual fall of the Berlin Wall. Following Bowie’s death in January 2016, the German government thanked Bowie for “helping to bring down the Wall”, adding “you are now among Heroes”.

Here is a video of this song: www.youtube.com/watch?v=lXgkuM2NhYI

And let me remind you: we all can be heroes. The world desperately needs such heroes. The Berlin Wall may now be down, but there are plenty of other ugly and evil walls in existence. Who will be part of history in seeking to tear down these walls? We all have a role to play.

9 Replies to “Remembering the Berlin Wall – We Can be Heroes”