In one sense there is nothing to say here – certainly nothing really new or insightful or all that helpful. The best thing is to keep praying for everyone involved. So that at least I can encourage all of you to do. But for good or ill, life goes on, and millions of words have already been offered on this. We must seek to make at least some sense about all this. So let me say a few words about various aspects of this horrific terror attack. 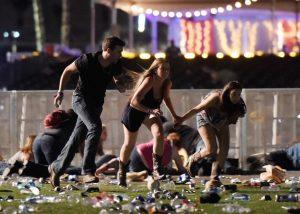 The basics of this shooting are now well-known: Retired 64-year-old Stephen Paddock opened fire on a 22,000-strong crowd at the end of an outdoor country music concert in Las Vegas, Nevada from his Mandalay Bay Hotel room. Around 60 are dead and around 530 are injured after this premeditated and carefully planned attack. He took his own life when his room was charged by police forces.

Authorities say that 23 firearms were recovered at the hotel and 19 at his home. He had been in a 2-bedroom hotel suite room for some four days. He hammered holes in two windows and shot at the crowd from the 32nd floor. He evidently was a high-stakes gambler and had big gambling debts, but at this stage any political or religious or ideological motivations are not clear.

The issue of why God allows tragedies and sufferings has been discussed for millennia. I have written plenty on this as well. The short answer is we do not know exactly why particular tragedies happen. The Christian believes that God is too wise to make a mistake, and too loving to be unkind.

But in a fallen world these sorts of things happen. A usual complaint offered by non-Christians – and some believers – is that God could have prevented this. Why didn’t he? Again, entire libraries have been devoted to such questions, but the Christian can say a few very brief things in reply.

Yes, God could intervene, and he likely has intervened often in many other such cases. We just do not know how exactly God interacts with the world he created and those he made in his image. To intervene every single time an evil act is about to happen is effectively to render all of us robots, not morally responsible human beings.

Does the critic really want to become a mere automaton, with no genuine choice, where all bad thoughts and actions are nipped in the bud before they proceed? That is one way to eliminate evil and suffering, but it is also a good way to eliminate what it is to be human.

If justice is not done in this life, the believer knows that it will be fully done in the next. And we take heart in passages like Revelation 21:4: “He will wipe every tear from their eyes. There will be no more death’ or mourning or crying or pain, for the old order of things has passed away.”

Or as President Trump said in his speech on this tragedy (quoting Psalm 34:18): “Scripture teaches us the Lord is close to the brokenhearted and saves those who are crushed in spirit. We seek comfort in those words for we know that God lives in the hearts of those who grieve.”

But again, all this has been discussed millions of times before, and no new insight can here be found.

Already there are those seeking to get political mileage out of this. Obviously the gun control crowd weighed into this immediately (see more on this below). But various folks on the left have sought to score cheap political points and have used this to slam Trump, Republicans, and conservativism.

As but one nauseating example consider Hayley Geftman-Gold, the senior counsel for strategic transactions at the American television network CBS. She said this on Facebook: “I’m actually not even sympathetic bc country music fans often are Republican gun toters.” Thankfully it seems that CBS has since fired her.

I will be brief here and I will offer this warning: for far too many folks this is a hot-button issue, and they will simply emote with knee-jerk reactions often bordering on the hysterical. There is a mountain of facts and data on the issue of gun control, and it is not my intention to rehash it all here.

A few quick truths: Over 80 million American gun owners use their firearms responsibly, safely, and legally. The military type weapons used by Paddock are effectively illegal in the US. Fully automatic weapons like this are so heavily regulated at both the State and Federal levels that it is exceedingly difficult for civilians to get them. They have basically been banned since 1986 for civilian use.

But until we learn much more about the terrorist, how he got his firearms, etc., it is difficult to properly debate this issue with any clarity. So those who want to yet again call for more gun control should just cool it for a few days. There is yet so much we do not know about this guy and what he did and how he did it.

Where and how were these weapons procured, etc? How did he make the modifications? He had no military background yet seemed to plan a perfect attack. It was well thought out and meticulously executed. How did all this come about? Where did he learn all these things? How did he manage to pull it off? Questions abound.

Indeed, there is so much about this incident that is so very strange that a number of articles have already appeared asking some very hard questions. Here are three of them – they are well worth reading:

So most comments sent here on the gun control debate will likely not be posted – not until I first write some lengthy and detailed articles on all this, looking at the legal, political and social complexities of this debate. It is far more complex than many people realise, and simply offering emotional reactions is not sufficient here.

The real issue here is not guns. It is not really politics either. The real issue is ultimately spiritual, and until that issue is dealt with, all other remedies we offer and all the changes we come up with will be cosmetic at best. I like how Tony Perkins of the Family Research Council in the US has just put it:

There will be calls for greater restrictions on guns and gun ownership. While the victims’ families try to pick up the pieces of their lives, the last thing they need is to be in the middle of a national gun rights debate. And is that really the solution anyway? The government can’t make us safer until it recognizes that the problem isn’t the instruments of violence — but the culture of it. The heart of the matter, as Dr. Ben Carson once said, is the matter of the heart. Gun control is merely dealing with the symptom. What about the real problem — the fact that we’ve gotten to a point in our “civil” society where people are seen as disposable? What has brought our country to a place where we no longer value human beings created in the image of God? A God, I might add, that some Americans are punished for even invoking.
Maybe it’s time we stepped back, as a nation, and considered what’s happened since we removed the Judeo-Christian foundation that anchored this country from its cradle. That knowledge is what teaches us that human beings are intrinsically valuable because they carry the image of God. Without it, people’s understanding of the worth of life is dramatically reduced, especially when it’s replaced with a view that human beings are the product of chance. If anything, last night should have shown more people what this survivor realized: there is a God, and finding Him is the most important thing we can do.

I finish where I began. All of us should now be praying for the many victims and their families and loved ones. This is so utterly tragic. We cannot know what horror and grief they are now experiencing. What happened was an evil act by an evil man.

He will face his Maker and His judge. But now so many people need the grace and comfort of a God who knows all about suffering – a God who even lost his own innocent son. It is to this God who suffers with us that we must commit ourselves to in such dark times.

18 Replies to “On the Las Vegas Shooting”