Reading like a Who’s Who of Hollywood actresses, the number of women who have come forward and claimed that they were raped or sexually assaulted and harassed by film producer Harvey Weinstein is now well over 60 and still climbing. 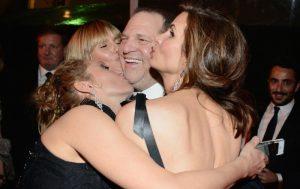 How many more will emerge in the days ahead remains to be seen, but this guy was one big pervert and parasite. In the past few weeks plenty has already been written not only on this sexual predator but on the double standards of Hollywood and the Left.

Weinstein of course was not alone in such sickening behaviour. This sort of behaviour by the big cheeses in Hollywood had been going on for as long as Hollywood existed. Powerful, sexually abusive men and young women ever so desperate to make it big in Tinsel Town.

That is a volatile mix indeed. And one can talk about starlets so keen to get a career in Hollywood that they would allow stuff like this to happen, and not say a word about it for ages. Yes, some are now coming forward, but how many hundreds or thousands of women suffered over the decades?

Of course all of this is simply part of the larger sexual revolution which has plagued the West for over a half century now. Before looking at the issue more generally, let me offer a few worthwhile quotes from some commentators on the Weinstein horror.

Even though most folks knew what was going on, why did it stay hushed up for so long? Lee Smith reminds us of a basic truth here: “The reason no one wrote it is not because the press wanted to get Weinstein, but couldn’t prove the story. No, it’s because the press was protecting Weinstein. Why wouldn’t they? He made terrific movies and he was a big mover in Democratic party politics, raising millions for local and national campaigns, including the Clintons.”
www.weeklystandard.com/the-human-stain-why-the-harvey-weinstein-story-is-worse-than-you-think/article/2009995

Promoting the favourite causes of the Left seems to be far more important than uncovering sexual assault. Miranda Devine exposes the double standards going on here:

We’re told his behaviour was an open secret in Hollywood and the media, with a former New York Times reporter Sharon Waxman this week claiming that her piece exposing Weinstein in 2004 was gutted by the newspaper after Weinstein muscled her editors.
It is a hallmark of the Left to give fellow travellers a free pass for any atrocity while screaming blue murder at conservatives for “micro-aggressions” on Twitter. How they moralised when Donald Trump merely talked about touching women inappropriately (“grabbing pussies”) on the infamous “Access Hollywood” tape of 2005, leaked during last year’s election campaign.
Those same moralisers and feminists were the same people who ran protection on Bill Clinton when he was accused of rape and assorted predatory sexual behaviour against young women. Hillary complains about Trump “looming” over her in an election debate, but is silent about her pal Harvey, and excused her husband as just “a hard dog to keep on the porch”. Hypocrisy, thy name is Hillary.
The predators even run protection for each other, like when Weinstein spearheaded Hollywood’s defence of paedophile director Roman Polanski. “It’s a shocking way to treat a man who went through the Holocaust and his wife’s murder” was Weinstein’s take.
But a new generation is refusing to enable sexual predators just because they pay lip service to left wing causes. They seem to believe that virtue signalling should signal actual virtue.
www.dailytelegraph.com.au/rendezview/weinstein-represents-all-thats-wrong-with-the-left/news-story/2821daaf8433a3c4966f994e814ce0bb?nk=4f93e6aa739a61cf44339fac8466dbed-1508125083

Or as Jennifer Oriel put it:

So many of Weinstein’s former besties are rushing to disavow him that it sounds like a chorus of “out, damn spot”. Many are washing their hands of guilt by claiming ignorance about the years of alleged abuse. Yet more reports are emerging that indicate his alleged propensity for sexual predation was well known in Hollywood — and beyond. If true, the scandal will spread to Washington. Weinstein is a generous funder of Democrat campaigns and popular left causes. He was close to both the Clintons and the Obamas.
Hollywood once possessed that most magical quality of the power to enchant. It was a glittering dream, a technicolour siren luring us from the mundanity of daily life to some enchanted moment. But tinsel town turned into trash town. Perhaps now we know why; art imitates life.
www.theaustralian.com.au/opinion/columnists/jennifer-oriel/harvey-weinstein-story-the-latest-entry-in-hollywood-boysown-franchise/news-story/61fe602e9e3cb07507732d4655c5d915?nk=4f93e6aa739a61cf44339fac8466dbed-1508124578

Matt Walsh raises some important issues about our screwed-up culture:

It’s been a bad month for perverts. We started with the death of Hugh Hefner, an elderly pimp with an affinity for bathrobes who spent six decades sexually exploiting young, desperate women. A couple of weeks later we saw the professional death of Harvey Weinstein, a slightly younger pimp with an affinity for bathrobes who spent three decades sexually exploiting young, desperate women. But, as I’m sure you’ve noticed, the reaction to these two men has been drastically different….
We seem to have a very confused notion of sexual morality. Mostly because we have no notion of it. We’re making it up as we go along. One minute we’re calling a creepy 90-year-old man a hero because he coerced a bunch of girls to get naked for him, the next we’re crucifying a creepy 65-year-old man because he did something quite similar.
www.dailywire.com/news/22315/walsh-please-dont-act-shocked-and-appalled-harvey-matt-walsh#exit-modal

Weinstein’s sin and sleaze is simply part of the bigger sexual revolution which has caused so much havoc for so long now. And the answer to uncontrolled sexual license has always been the Judeo-Christian version of events when it comes to human sexuality.

It should be obvious that modern society has paid a terrible price – and will go on paying it – for its false separation of ‘morality’ from ‘social problems.’ Sex creates life. This makes it immediately a subject for both moral and social concern… All durable societies have had sexual codes. The variations are less important than what they have in common: a sense of responsibility about reproduction, the assurance that fathers will take care of their children… The Greeks and Romans worshipped fornicating gods; the Jews worshipped a God who forbade fornication. Who survived whom?… The state can’t enforce a sexual code and shouldn’t try to. But it can, without trying, undermine such a code.

Gene Veith further lays out the basic Christian understanding on these matters:

Of course sex is a big deal. How could it not be? Sex generates new life! By attracting men and women into marriage and enabling parenthood, sex creates families! And families are the foundation of all culture! Sex is tied up with our personhood and our most intimate relationships.
Sexual desire is so powerful that it must be restrained, controlled, and channeled. Thus, all true cultures have their sexual taboos and social norms. Even Freud, the patron saint of the sexual revolution whom the revolutionaries got laughably wrong, taught that the sexual desire must be controlled; otherwise, civilization would come apart and individuals would descend into primitive violence and self-destruction.
Sexual self-discipline is rightly a key moral principle. To abandon all sexual restraints is to destroy the family, violate one’s neighbor, and defile oneself. Sexual sins are especially harmful because they lead to other sins, causing others to sin (the person seduced into “consent”; the prostitute; the porn model) and potentially culminating in child murder, when an “unwanted” child is aborted.
www.patheos.com/blogs/geneveith/2017/10/sex-is-a-big-deal/

And David French reminds individual Christians of how important things are in this regard:

When husbands and wives understand and adhere to Christian ethics, the dominant result isn’t just a healthy family life, their sex life is often more vibrant than their more “liberated” peers. In other words, the natural result of the Christian sexual ethic is an intact family and a culture of human flourishing. Now is the time for Christians to leave their defensive crouch, to approach the public square with confidence. A wounded and broken sexual culture searches for answers. Who are we to withhold the truth?
www.nationalreview.com/article/452683/sex-consent-morality-culture-ruined-sexual-revolution

The nightmare unfolding over in LA is simply a snapshot of a much bigger horror story occurring all over the West. For all of the bad press Judeo-Christianity gets when it comes to sexuality, maybe folks can learn something from this worldview. Its alternative sure is not much of a panacea.

3 Replies to “Weinstein and the Costs of the Sexual Revolution”