Like a bout of bad turbulence on an airplane flight – it is terrible to go through but you hope it will end eventually – living in the West in these moonbeam times can be quite a ride. It seems to get worse by the day, and one simply hopes and prays that it will all come to a speedy and decisive end. 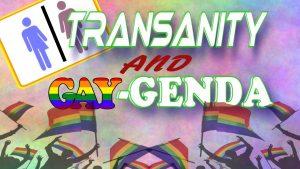 The daily news headlines are enough to make many otherwise sensible people want to head to the hills, never to return. And many are, actually. Leading the charge here with this uber-madness is of course all things related to the newest and most bizarre militant crusade: radical transgender activism.

Daily we find new horror stories emerging about this lunacy. If I go a few days without writing about such matters, there will be a whole raft of new stories about the gender bender agenda, and the horrific harm it is doing to so many. Thus it is time for me to once again offer just a few recent examples of this.

While there are sadly many more like them, let me offer just four of these here. The first news item concerns a primary school in California where the trans activists are out in force. The story has this as its headline: “’My daughter came home crying afraid she’d turn into a boy’: Parents’ anger after kindergarten lesson has student’s transgender reveal occur mid-class”.

Parents are angry after a kindergarten lesson had a student’s transgender reveal occur mid-class. The incident took place last year after a Rocklin Academy Gateway teacher gave the lesson on transgenderism because a boy in the class is transitioning to a girl, reported FOX40.
The California charter school and parents are now battling over whether the lesson was appropriate or if the kindergartners were too young to understand. During the lesson on the second-to-last day before summer break, the teacher, who has not been named, read two books, I am Jazz and The Red Crayon. Both are meant to explain ‘transgenderism’ to children between ages four and eight.
However, in what critics are calling a ‘transition ceremony’, the teacher introduced the five-year-old student to the class as a boy. The student then went into the bathroom and emerged dressed as a girl. The teacher then reintroduced her to the children, and explained she was now a girl with a girl’s name and was to be called that from now on.
Many parents said they had no idea the lesson was coming and weren’t notified it occurred until a week later when a letter was sent out. Concerned parents went to the Pacific Justice Institute and the California Family Council to represent them.
‘These kids who had never struggled with their gender identity before are all of a sudden scared they could be turned into a boy,’ Greg Burt, director of capitol engagement with the California Family Council, told FOX40. The teacher who read the books defended her actions during a school board meeting on Monday night.

This is a real shocker, but sadly it is not a stand-alone story. My second story also comes from California, and it is equally frightening:

California is on its way to passing a new law that makes it illegal to call transgender senior citizens a pronoun they don’t like. For example, if an elderly person who was born male and lives in a long-term care facility wishes to be called “her” or “she,” the workers there had better do it or face the consequences. The proposed law would even apply to Christian facilities.
SB 219, titled the “Lesbian, Gay, Bisexual, and Transgender Long-Term Care Facility Resident’s Bill of Rights,” states, “It shall be unlawful for a long-term care facility or facility staff to…. willfully and repeatedly fail to use a resident’s preferred name or pronouns after being clearly informed of the preferred name or pronouns.” It imposes fines and jail time on any long-term care employee who refuses to use transgender pronouns. Fines for repeat offenders could be as high as $1,000 and a jail term of up to a year.
The bill will also mandate bathrooms and rooming situations be designated by gender identity and not biological sex. There are no exemptions for long term care facilities run by religious institutions who integrate their beliefs about gender into their policies and practices.

Wow, that is a deep and ugly sort of madness going on there. But it is not unique, and I have written about other such laws going through, or at least being discussed. Scary times indeed. Indeed, things are no better in the UK:

Children as young as 13 are being railroaded into changing gender by overzealous NHS therapists who parents fear are misdiagnosing their young patients. Concerned parents have spoken of their worry that clinic staff are ‘blindly accepting’ children’s claims that they were born the wrong sex and are failing to treat serious mental health conditions.
A campaign group, Transgender Trend, is now receiving pleas for help from ‘desperate’ parents every week.
One mother was stunned when a 15-year-old girl was referred to a specialist transgender clinic after a consultation of just 40 minutes. The outcry comes as:
-Doctors fear being sued after the NHS signed a ‘memorandum of understanding’ banning staff from challenging patients who believe they are born the wrong sex;
-Teenage YouTube stars who enthuse about changing sex are making being transgender ‘cool’, according to parents;
-Children being referred for transgender treatment on the NHS have surged to record numbers – there are now 50 a week.
While children are coming forward in ever-increasing numbers to say that they believe they were born the wrong sex, there are fears that therapists are ignoring the possibility of other conditions.
Hundreds of alarming stories have been posted over the past two months on an online forum set up by a father who says his teenage daughter is making a mistake in seeking to change gender. The father, who asked to remain anonymous, said: ‘The universal experience [of the parents] is that whether the child has been diagnosed with autism, depression or ADHD, the therapists are completely discounting any other symptoms.’

Pity the poor children. This is indeed a war against our children, and the adult activists have a lot to answer for. But one suspects things will get far worse before they get better.

My final story involves a guy who has been fully caught up in all this lunacy for years. For decades now he has spent kazillions of dollars to look just like a Ken Doll. Now it seems he is still unsatisfied, so he is seeking to ‘transition’ into a Barbie Doll. Yes you heard that right. The story starts this way:

A human ‘Ken Doll’ has spent £19,000 on surgery to feminise his hairline so he can live as a Barbie. Rodrigo Alves, 34, flew to Beverly Hills Hair Restoration clinic in Los Angeles last week to begin his 59th surgery, which will gradually allow him to “live as a woman”.
This is the TV star’s 59th surgery. He has spent more than half a million dollars on procedures including nose jobs, silicone chest implants, eight pack abs and more. The 34-year-old, who lives in London, said he would rather slowly modify his appearance than do “everything at once like Caitlyn Jenner”.
He said: “I have hair loss from all the medication and surgeries I have had, also I’m 34-years-old so not young anymore, also as a man we start producing hormones that trigger hair loss. “I will be having 3,000 single hairs implanted over six hours follicle-by-follicle from the sides of my head into my hairline and then stem cells injected too.

Oh dear. That guy needs help – big time. But he would be just one of many who have been led down the garden path of high-octane moonbattery by our gender benders, social activists, and militant ideologues. He is an adult and his mental and psychological problems are bad enough.

But I really worry deeply about all the poor children being caught up in this never-ending sea of madness. One day the passing madness will indeed come to an end. But until it does, how many millions of people – especially children – will be terribly damaged by the coercive utopians trying to remake society into their own disordered and distorted image?

7 Replies to “Vignettes from the Passing Trans Madness”