Hmm, a contradiction here? An oxymoron? We know that the word ‘secular’ is synonymous with terms like non-religious, non-spiritual, non-church, temporal, worldly, etc. Secular is the opposite of sacred. ‘Sacred’ has to do with God, religion, spirituality, etc.

The word ‘theocracy’ is a compound of two Greek terms: God and rule. Ancient Israel was a theocracy in many respects (although there was some separation of powers, with prophet, priest and king), and Islam is a theocracy, with no division between sacred and secular. 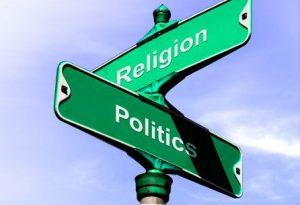 So the two terms would seem to exclude each other. However, there ARE such things as secular theocracies. That is because at bottom everyone is a theist. Sure, they may not be Hindus or Jews or Christians or Muslims. They may be secular to the core. But they are still theists.

Thus societies and cultures are all at bottom religious. One of the great lines from Douglas Wilson (and he has many) came from an essay he penned a decade ago. He was responding to another believer who said “I sure don’t want to live in a theocracy.” Wilson replied:

But if we are talking about lifestyle, and if lifestyle refers to something more than a personal consumption item, at some point we are going to have to enact laws. Culture is impossible without them. But cultures differ because they serve different gods, and different gods require different things. This means the laws are different. Every society is a theocracy. The only question is, “Who’s Theo?”

Yep, every culture is a theocracy and we need to ask who is god in that culture. In the West the primary god of this age can be called by various names: secular leftism, secular liberalism, secular humanism. This is the reigning worldview amongst the intelligentsia, the media, the academy, and so on.

Those who dare to stand against it are branded as heretics and apostates. And it has its own sacred texts, priests and prophets. Secular humanism was long considered to be a religion, with many secular humanists proudly affirming this. For example, John Dewey, in his 1934 book, A Common Faith, spoke of a “humanistic religion”. He wrote:

Ours is the responsibility of conserving, transmitting, rectifying and expanding the heritage of values we received that those who come after us may receive it more solid and secure, more widely accessible and more generously shared than we have received it. Here are all the elements for a religious faith that shall not be confined to sect, class, or race. Such a faith has always been implicitly the common faith of humanity. It remains to make it explicit and militant.

Julian Huxley’s 1957 book was titled Religion Without Revelation. In it he said, “What the world needs is an essentially religious idea-system… charged with the total dynamic of knowledge old and new… scientific and spiritual.”

And again, “Man’s most sacred duty… is to promote the maximum fulfillment of the evolutionary process on this earth; and this includes the fullest realisation of his own inherent possibilities.” And the first Humanist Manifesto (1933) spoke openly of “Religious humanists”.

Even the US Supreme Court referred to secular humanism as a religion (see the 1961 Torcaso v. Watkins case). So this may well be the major religious system in the West today. Back in 1983 Herbert Schlossberg penned a very important book called Idols for Destruction. In it he wrote:

What is widely regarded as a struggle between the religious and the secular is really a struggle between religions. . . . Man is the autonomous ruler of himself, able to define right and wrong and frame statutes according to whatever he defines as just. Or else man is created and sustained by a holy and just God who declares on matters of right and wrong in the form of law. Both are religious views held by faith. In the most basic sense there is no such thing as a secular culture.

All cultures are religious, and some are better than others. Secular humanism really has become a counterfeit religion, and when it is combined with the power of the state it becomes a very dangerous thing indeed. As Ben Wiker put it in an article from 2013:

But the truth is secular liberalism isn’t what you get when you subtract all religions. What you get when you subtract religion is another religion, secular liberalism, an entirely secular worldview dominated by materialism and hedonism and exceedingly intolerant of all other religions, especially Christianity. You get, to be exact, the secular culture championed with religious zeal by the Left imposed with all the power the federal government can muster. The naked public square is secular atheism’s monument.

The same year his incisive book appeared, Worshipping the State: How Liberalism Became Our State Religion. In it he said, “The truth is that secular liberalism is a political religion… It isn’t just removing Christianity from the public square, so as to be fair to everyone who’s not Christian. It’s really, at heart, a revolution to establish secular liberalism as the defining worldview for our whole society.”

And one more quote:

In defining itself from top to bottom directly against Christianity, secular liberalism is a kind of inverse image, like a photo negative, of the religion it has so energetically worked to displace for the past several centuries. It is a kind of anti-Christian religion as extensive in its claims as the Christianity it denies, with its own set of passionately held beliefs and dogmas. It doesn’t just look like a religion. It doesn’t just function like a religion. It is a religion.

So we know who Theo is in the West today. And it is a very dangerous rival to the Judeo-Christian worldview. That is why we must do much more than engage in particular – albeit important – skirmishes, such as about redefining marriage or defending the sanctity of life.

We must also engage in the battle of ideas at the worldview level. We must do two things simultaneously: we must uphold, promote and defend the Judeo-Christian worldview, and we also must challenge, resist and take head on the secular humanist worldview.

Until we engage in this bigger battle of worldviews, we will not get very far in the culture wars. At bottom this is a war over supreme allegiances and ultimate loyalties. It is a war about who is Theo. Is it the one, true and living God, or is it the new false god of secular humanism.

In many ways this is the defining battle of our time. Let me finish with some words from a Catholic philosopher who I have so often quoted. In his 1971 volume, The Gods of Atheism, Vincent Miceli concludes with these words:

Moses failed to write the following commandment: ‘Thou shall not be an atheist.’ Instead his first commandment read: ‘I am the Lord thy God . . . Thou shalt not have strange gods before me.’ It was as if Moses had written: ‘Atheists are not godless men; they are men addicted to false gods.’ Thus, the battle of love to which the Christian is honourably called today is the struggle to liberate his atheist neighbours from enthrallment to false gods and to help these neighbours find the True God.

10 Replies to “Challenging Our Secular Theocracies”