There is a lot of confusion about issues of sexuality and ethics. Plenty of atheists and secularists seek to argue that things like chastity, abstinence, faithfulness in marriage, and so on, are just things Christians are into, and there is no other basis for supporting such things.

And clueless Christians – often of the left – also tend to run with these faulty ideas. They claim we are hung up on sexual issues and personal morality, and we should not be pushing our morality onto others anyway. And they insist that pagans don’t have the same moral codes as we do, so why even bother?

Much can be said in response to these warped notions. Let me do this briefly in two ways: one, to point out how some pagan leaders in the Bible saw such things, and two, to look at the concept of universal moral law. As to the former, since I am again reading in Genesis, let me offer three different but similar examples of this. 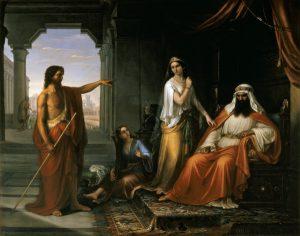 On various occasions God’s chosen leaders acted deceitfully, and lied about their wives. This could have resulted in adultery or fornication being committed, but in each case God intervened. Of real interest is the fact that the pagan rulers involved knew this to be wrong.

The first one is found in Genesis 12:10-20 where we read about Abram and his wife Sarai in Egypt. While there, out of fear, he told the Egyptians that she was his sister. But as we read in v. 18, “So Pharaoh summoned Abram. ‘What have you done to me?’ he said. ‘Why didn’t you tell me she was your wife?’”

She may in fact have been Abram’s half-sister, or niece, but the point here is that even this pagan ruler knew that such sexual immorality was wrong. He had no Bible or Holy Spirit, but he knew what was right and wrong here.

A similar episode is found in Gen. 20. It again involves Abraham, but this time with Abimelek, the king of Gerar. Again, Abraham tells a porkie about his wife, and again he almost caused massive trouble. Consider what it says in verse 3: “But God came to Abimelek in a dream one night and said to him, ‘You are as good as dead because of the woman you have taken; she is a married woman’.”

And then, verse 9: “Then Abimelek called Abraham in and said, ‘What have you done to us? How have I wronged you that you have brought such great guilt upon me and my kingdom? You have done things to me that should never be done’.”

Once again we find a pagan ruler with a clear sense of sexual morality. Our third case of this happening is found in Gen 26:1-11. The poor old Philistine king Abimelek is again involved in more deception, this time by Isaac regarding his wife Rebekah. In verses 9-11 we find this:

So Abimelek summoned Isaac and said, “She is really your wife! Why did you say, ‘She is my sister’?” Isaac answered him, “Because I thought I might lose my life on account of her.” Then Abimelek said, “What is this you have done to us? One of the men might well have slept with your wife, and you would have brought guilt upon us.” So Abimelek gave orders to all the people: “Anyone who harms this man or his wife shall surely be put to death.”

Again we find the Philistine leader well aware of what is right and wrong in terms of sexuality and marriage. Kenneth Mathews, commenting on the Gen. 20 episode, says this:

The king’s fury is understandable since such conduct was reprehensible even in his own eyes. Moreover, he is at a serious disadvantage in dealing with a man whom he knows God has sheltered. Adultery is named a “great sin”/“great crime” in ancient Near Eastern texts, reflecting the severity of the offense in the eyes of society.

Other Old Testament accounts could be mentioned here. God judges pagan nations, and he expects them to turn from their wicked ways and repent. Evil Nineveh is a classic case in point as we read in the book of Jonah. As Jonah 3:10 says, “When God saw what they did and how they turned from their evil ways, he relented and did not bring on them the destruction he had threatened.”

Consider a quick example from the New Testament. John the Baptist is another person who actually stood up for marriage and morality against a ruler of his time, and was killed for doing so. He actually confronted King Herod over his sexual immorality and his desecration of the institution of marriage.

For doing this John had his head chopped off. Yet he stood strong affirming biblical morality in a wicked climate. We should do the same. Yet how many times was I told by ‘progressive’ Christians recently that homosexual marriage is just peachy, and we should not try to push heterosexual marriage in a secular society?

A few months ago I wrote this about John and marriage:

What we find in Luke 3:19-20 is especially shocking to so many of today’s trendy, don’t-rock-the-boat Christians: “But when John rebuked Herod the tetrarch because of his marriage to Herodias, his brother’s wife, and all the other evil things he had done, Herod added this to them all: He locked John up in prison.”
And as we read more fully in the accounts found in Matthew and Mark, because of all this, John was beheaded. Umm, how might so many believers today respond to this? “But Christians are not supposed to waste time talking about sexual sin. That is not our calling. We are just supposed to love people into the Kingdom. We cannot turn people off by focusing on their private sex lives. We are not to judge anyone!”
Many of these men-pleasers would be gobsmacked that John actually did this. However, the forerunner to Jesus knew it was his responsibility before God to do this very thing. It was what he was called to do. It was a core part of the gospel message: preaching on sin and repentance. Too bad so few leaders today refuse to do this.
Indeed, the majority of even our evangelical pastors have likely not said one word about the current homosexual marriage debate. They are compromising cowards who have sold out the gospel to keep the masses happy.
billmuehlenberg.com/2017/10/21/ministry-tips-john-baptist/

The idea that we are all made in God’s image, all live in God’s moral universe, and all have a moral conscience, means that everyone has a moral sense and knows what God expects of us at least to some extent. Yes, because of the fall our morality is skewed and our consciences are clouded.

C. S. Lewis looked at this idea in more detail, especially in his 1947 book The Abolition of Man. In it he argued against the philosophy if nihilism and moral relativism. He argued that all cultures and religions have a basic understanding of right and wrong.

“Until quite modern times all teachers and even all men believed the universe to be such that certain emotional reactions on our part could be either congruous or incongruous to it—believed, in fact, that objects did not merely receive, but could merit, our approval or disapproval, our reverence, or our contempt.”

“What is common to them all . . . is the doctrine of objective value, the belief that certain attitudes are really true, and others really false, to the kind of thing the universe is and the kind of things we are.”

“And because our approvals and disapprovals are thus recognitions of objective value or responses to an objective order, therefore emotional states can be in harmony with reason (when we feel liking for what ought to be approved) or out of harmony with reason (when we perceive that liking is due but cannot feel it). No emotion is, in itself, a judgment; in that sense all emotions and sentiments are alogical. But they can be reasonable or unreasonable as they conform to Reason or fail to conform. The heart never takes the place of the head: but it can, and should, obey it.”

The truth is, we live in a moral world and all people need to be held morally accountable. if pagan kings like Abimelech knew that things like adultery were wrong, we should not be shy in publicly standing up for biblical morality. Sure, we may need to use non-biblical jargon when speaking with our non-Christian friends, as Christian apologists like Lewis so often did.

But the idea that we must just shut up as we see the war on marriage and family and sexual morality taking place all around us is foolish in the extreme. We must not remain silent about such matters. The world desperately needs to hear biblical truth and learn about biblical morality.

It is our job to present it to them. If our fate ends up like that of John the Baptist, well so be it.

6 Replies to “Christianity, Sexual Morality and the Public Square”