OK, another week, another dozen or so cases of Europe going down the gurgler, mainly because of patently failed multiculturalism policies, and a political ideology known as Islam. One can never write too often about all this, because the cases are never-ending.

And you can pick your country here – all throughout the UK and Western Europe we see the same problems over and over again, from Scandinavia down to the Mediterranean. Letting in masses of immigrants who are not very keen on the values and beliefs of the host nation is always going to end up ugly.

And all these examples would simply scratch the surface of reported cases, but imagine how many more unreported cases there are. Things are getting so bad that one can just barely offer more than a bullet-point summary on this. Indeed, with so many stories to run with, let me just offer the headline, date, the opening lines from each article, and the link. 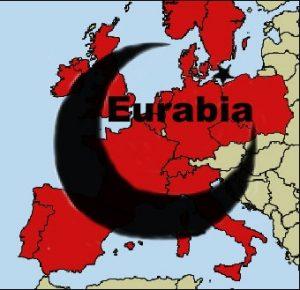 Greek mayor: “Women are afraid to go out alone, we keep our children inside our homes”
May 31, 2018
Spyros Galinis, the mayor of Mytilene, the capital of the island of Lesbos, told Greek news outlet Iefimerida, that the people in his city are increasingly concerned about migrants. Galinis said that “Women are afraid to go out of their homes, we keep our children in our houses”. According to the mayor, Lesbos is exhausted of the ongoing dangerous situation with migrants. The people of Lesbos were once represented by the media as the people of solidarity, who even opened their homes to refugees from Syria. But now the situation has completely changed, as the once solidary and tolerant residents of Lesbos are facing the cruel reality of the uncontrolled mass immigration crisis that is inflicting Europe once again.
voiceofeurope.com/2018/05/greek-mayor-women-are-afraid-to-go-out-alone-we-keep-our-children-inside-our-homes/

Germany: Corpus Christi procession canceled due to inability to provide safeguards against jihad attacks
May 31, 2018
There will be much, much more of this: Europeans curtailing their activities and sacrificing elements of their culture in order to guard against Islamic jihad massacres. This is the future of the United States as well, if the Left gets its way. The wound in Germany is self-inflicted, and will be in our case as well. Islamic law forbids Christians to make any public display of their faith, including processions. So this cancellation is exactly what Islamic jihadists were hoping for and striving for: the voluntary acceptance of dhimmitude and Sharia by a non-Muslim population.
www.jihadwatch.org/2018/05/germany-corpus-christi-procession-canceled-due-to-inability-to-provide-safeguards-against-jihad-attacks

German teen girl needs surgery after being violently raped by a Syrian refugee in a cellar
May 31, 2018
A brutal rape of a German teen has shocked the city of Chemnitz. A Syrian refugee attacked and raped a 15-year-old German girl in a cellar. The young girl was so badly injured that she needed surgery, tabloid Bild reports.
voiceofeurope.com/2018/05/german-teen-girl-needs-surgery-after-being-violently-raped-by-a-syrian-refugee-in-a-cellar/

Axe-wielding maniac kills police dog and attacks officers before being shot in the Dutch city of Schiedam
May 30, 2018
An axe-wielding maniac killed a police dog and attacked officers before being shot by cops in the Netherlands yesterday. Dutch police shot and wounded the Syrian man after he assaulted cops trying to arrest him at an apartment in the Dutch city of Schiedam. Just hours after the bloodshed in the Netherlands yesterday evening, a policewoman was stabbed in Germany following an incident on a train approaching Flensburg central station.
www.thesun.co.uk/news/6416020/axe-netherlands-attack-shot-dead-stabbing-flensburg-germany-train/

French woman beaten up by Afghan asylum seekers ‘for being too lightly dressed’
May 31, 2018
A 33-year-old woman was severely beaten by two Afghan asylum seekers last week, France’s Valeurs Actuelles reports. The assault happened on a train leaving Paris. The men taunted and insulted the woman for not being dressed enough to suit them. The attack on 23 May started with verbal insults. The Afghans were reprimanding the woman for ‘showing too much cleavage’. After the train stopped at Dijon’s train station, they forced her out. The woman was kicked and beaten until she fell to the ground.
voiceofeurope.com/2018/05/french-woman-beaten-up-by-afghan-asylum-seekers-for-being-too-lightly-dressed/

I recently wrote about a classic case in point of failed immigration policies, the elevation of Islam, and the retreat of Christianity: Sweden. See my article here: billmuehlenberg.com/2018/05/25/the-islamic-republic-of-sweden-2/

A recent report tells us why, in part, Sweden is in such a bad way:

Swedes ‘least likely in Western Europe’ to go to church
May 31, 2018
When it comes to Europe, Sweden is the country where you’re least likely to find church-attending Christians. Yes, just 9 percent of respondents to a European survey said they went to church, according to a new study by the Pew Research Center. This was the same result as in Finland, with Denmark and Belgium just one percentage point behind.
voiceofeurope.com/2018/05/swedes-least-likely-in-western-europe-to-go-to-church/

The revelations of unhindered Muslim sex-trafficking of thousands of young girls in British towns, including Rotherham, Rochdale and Oxford, are so gross and shocking, so monstrous, and on such a scale as to actually make response or comment difficult, except to point out that they display Britain – or a significant part of it – as a failed and broken culture.
The most shocking aspect, of course, is the craven failure on a staggering scale of the very institutions part of whose raison d’être is precisely to prevent such things: the police, the social work industries, the local government bodies, and probably, at least in some cases, parents (certainly some parents seem to have done their best, and quite properly approached the authorities, only to be ignored).
The sickening, Eloi-like passivity with which the police and social-workers behaved for fear of being accused of racism indicates mass cowardice and moral corruption on a scale again difficult to describe. The more that is revealed about this scandal the worse it seems. It is not too much to call it the worst British public/political scandal in modern history.
www.spectator.com.au/2018/06/what-rotherham-means/

Finally, still on the bad news side of the ledger, this 39-minute video is well worth watching and sharing. Michelle Malkin looks in depth at the immigration crisis in Europe, and the Islamic rape gang plague: www.youtube.com/watch?v=ZF71dZMdjyo

But lest we all get far too depressed and discouraged, I better end with a bit of good news! Here are three pieces which speak about Europeans hopefully beginning to turn things around as they decide that enough is enough:

Over 40% of western Europeans find Islam ‘incompatible’ with their values – poll
May 31, 2018
Some 42 percent of people across western Europe believe Islam is incompatible with their values, a new Pew survey has found, noting that Christian-affiliated responders are more likely to reject foreigners in their community. In recent years, Europe has experienced a record influx of asylum-seekers and migrants from predominantly Muslim countries who are fleeing conflicts across the Middle East and North Africa. The wave of migration, encouraged by the German ‘open-door’ refugee policy, has prompted a heated public debate about immigration, border control, and security policies across Europe.
A new Pew Research Center survey has found that around 42 percent of the general population across 15 western European states believe that “Islam is fundamentally incompatible” with their national values and culture. Twenty-six percent of them believe that migrants from the Middle East are dishonest.
www.rt.com/news/428300-muslims-europe-religious-study/

Denmark becomes latest European country to ban burqas and niqabs
June 1, 2018
Denmark became the latest European country to ban garments that cover the face, including Islamic veils such as the niqab or burqa, after a vote in the country’s parliament. Human rights organisations criticised the move. MPs in the Scandinavian country approved the bill after it was introduced by the centre-right governing coalition, by a majority of 75 to 30, although 74 abstained.
The government said that the new law, which does not ban headscarves, turbans or the traditional Jewish skull cap, was not aimed at any religion. However, many see it as directed at the dress worn by some conservative Muslim
women, although full face veils are uncommon in the Scandinavian country
www.independent.co.uk/news/world/europe/denmark-burqa-ban-europe-muslim-women-face-veil-niqab-islam-a8377586.html

So there is some fightback going on. Overall, Eastern Europe is doing much better in this regard than Western Europe, with nations like Poland and Hungary resisting EU multiculturalism and PC madness. The question is this however: has the rot set in so far, so deep, and for so long, that it may now be too late to sufficiently turn things around?

Time will tell I guess, but it is looking very bleak indeed in Europe right now. And much of the rest of the West is not much better.

26 Replies to “The Multi Cult and the Desolation of Europe”